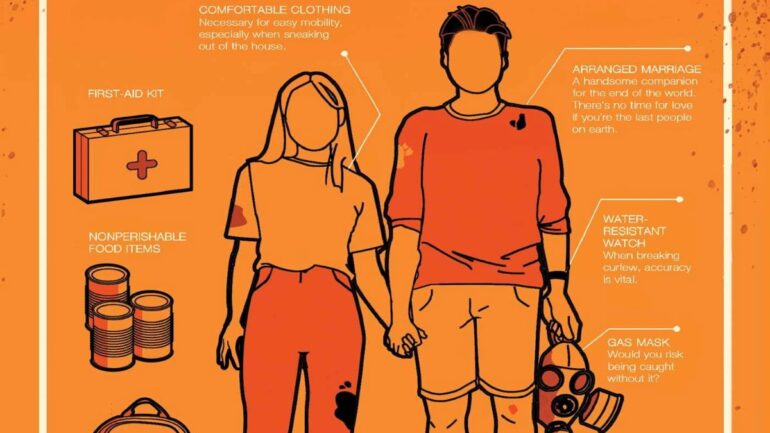 Bethany Mangle’s Prepped doesn’t take the usual steps one expects in YA fiction. There are apocalyptic elements, but we aren’t in a dystopia. Our protagonist Becca is part of a community of doomsday preppers, which means every day for her is like prepping for the Hunger Games – only it’s worse because her father is the one in charge. Becca knows that this isn’t the life she wants for herself, and zealously plans out her next steps, where a scholarship to Carnegie Mellon would mean a new life away from the community – a chance at a fresh start.

Like most YA, there’s also romance at the heart of things, but once again, it is an unconventional one. Just like Becca, we never look at Roy as a love interest, considering his commitment to the doomsday cause quite the turn-off, even if he is fairly helpful during training exercises. But when Becca’s father gets into an accident, Roy proves to be remarkably steadfast in the face of a true emergency, being there for Becca and her sister Katie.

The accident brings other changes as well; Becca’s mum becomes even more of a believer in the cause, and encourages Katie in her training. Becca, who was so eager to detach herself the moment it was possible, now finds herself wondering if she can bring herself to leave her sister behind. It’s interesting since we are taught to always save ourselves first before we try to save others, but Becca has never been competent in doomsday prep, sacrifice so laced into every facet of her being that she is willing to burn her future for the ones she loves.

Mangle handles the complexities of these relationships well. Becca feels like she can’t turn to her mother for comfort but is unable to abandon her in their family’s time of need. She dislikes her father’s role as a doomsday prepper and feels such resentment towards him during these exercises, yet his accident causes quite the emotional reaction. As much as she wants to leave it all behind, these people are also her family and the only world she’s ever known.

Becca isn’t the most likeable protagonist; she’s prickly and doesn’t really confide in anyone, barely letting anyone in to see who she truly is. We understand her situation, seeing as how confiding such truths would lead to more problems, considering her family’s influence in the community. Becca and Roy are also distant from people at school, since they are the only ones from the community who attend regular school.

But with Roy on her side, and another classmate called Sydney, we start to see Becca escape that shell a little, allowing others to help her to carry a little bit of that weight she’s held on to for so long. It is truly a character novel, with Mangle focused on Becca’s journey, which might put off some readers because there isn’t much plot to hold on to; the only question guiding us forward is whether or not Becca breaks away from her community.

The novel also has resonance to our lives today, since we currently exist on tenterhooks, unable to truly live because breaking the rules could result in devastating consequences. But it is different for us since we are in the midst of a pandemic, while the doomsday preppers imagine worst-case scenarios that will probably never come to be, so afraid of death that they never truly live.

READ NEXT: Whisper Down The Lane: Paranoia and Pentagrams