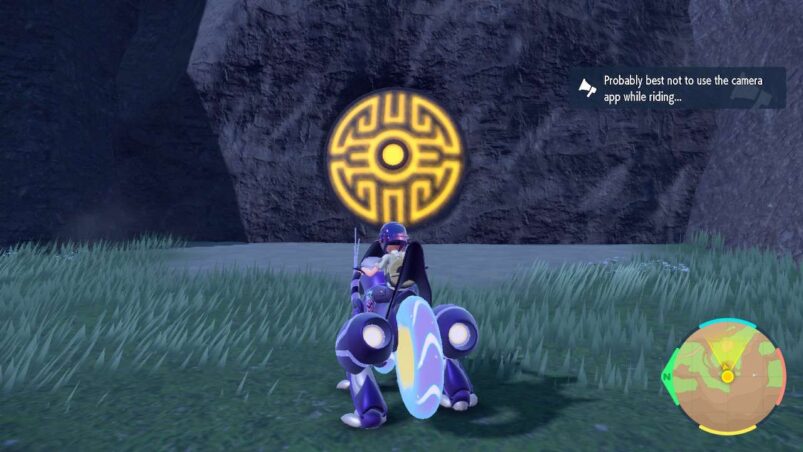 Throughout Pokémon Scarlet and Violet lay a total of 32 Ominous Stakes of varying colours: purple, yellow, green and blue. There are eight yellow Ominous Stakes in total that correspond to a hidden yellow shrine door. This shrine is called the Icerend Shrine and contains a mysterious Legendary Pokémon near to the West Paldean Sea and to the south-west of the Asado Desert. In order to open the shrine, you must locate and pull all eight of the yellow Ominous Stakes. Before you can find all of the eight stakes, Koraidon or Miraidon’s abilities such as climb, swim and glide must be unlocked via the Titan Pokémon storyline. Here are the locations of the yellow Ominous Stakes in Pokémon Scarlet and Violet.

The first yellow stake is located in South Province (Area Six) north-west of the town of Alfornada. There’s some green land amongst the hills that’s easy to find on a map and it’ll be perched on here. There’s a lake with a landform nearby, to the south-west.

The second of the yellow Ominous Stakes can be found in the West Province (Area One) near the West Paldean Sea. A Pokémon Centre is north-west of this stake and is the closest place to fly to from further away in order to reach it. Gliding or climbing is necessary to reach this stake.

Stakes two and three are in close vicinity of one another. Stake three is in the middle of a land form a short journey away from the second stake. Look for the piece of land that resembles a Poké Ball on the map.

Stay in the West Province (Area One) for this one, but a little closer to the centre of the map and away from the stake is located with the Asado Desert to its north-west and it is south-west of Cascaraffa. There it sits atop a hill overlooking some ruins. The closest place to fly in to is the Pokémon Centre south of Asado Desert.

The fifth yellow stake can be found in the South Province (Area Two). It’s just next to the Great Crater of Paldea and south of Cascaraffa.

This stake is almost in the centre of Cascaraffa. It’s just to the south-east of the city, tucked away behind a tree near the river.

The penultimate yellow stake is located to the East of Alfornada in the South Province (Area Six) reasonably high up. It’s actually on top of a small hill jutting out from the cliff-side next to a waterfall.

The final stake is inside a cave to the north of Alfornada and the west of Cortondo near the West Paldean Sea. Don’t confuse this cave with the one nearby on the map which has lights inside – if you see lanterns you’re in the wrong cave.

Please do not read ahead if you don’t want the contents of the shrine to be spoiled.

After pulling all eight of the ominous stakes, you can head to the shrine, which is located near the West Paldean Sea and Asado Desert. Once opening the shrine, you will release a Legendary Pokémon.

The Legendary Pokémon inside the yellow shrine is an extremely fast Dark and Ice-type Pokémon resembling a snow leopard. Its name is Chien-Pao and it possesses the Swords of Ruin ability. Load yourself up ideally with False Swipe as a move to bring the creature’s health down without knocking it out, and remember to save before opening the shrine. Plenty of ultra balls, timer balls and quick balls should be in your inventory before you attempt to catch Chein-Pao.