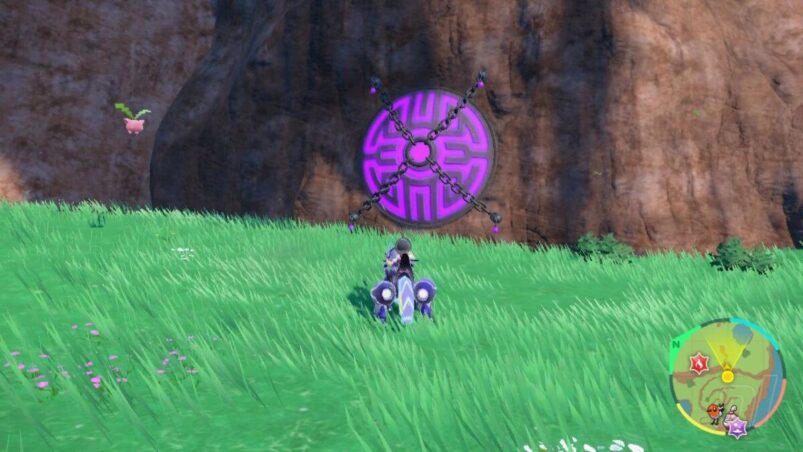 Throughout Pokémon Scarlet and Violet you may stumble across differently coloured glowing black stakes around the region of Paldea. Some of these so-called Ominous Stakes are purple and there are eight in total. These purple stakes correspond to a purple shrine door hidden in the world which is revealed to be the Grasswither Shrine. If you find all eight of these stakes and pull them from the ground, the shrine will be unlocked and you’ll hear a “mysterious cry”.

Entombed within this shrine is a Legendary Pokémon. Before you can find all of the stakes, you must unlock all of Koraidon or Miraidon’s abilities such as climb, glide and high jump. Here are the locations of the purple Ominous Stakes in Pokémon Scarlet and Violet.

The first stake is located to the south-west of Artazon. There is a Pokémon centre to the east of the city, travel south of there and climb a hill near some trees. The stake is near the edge.

The second stake is located to the north-east of Los Platos. Climb up the ledges and look towards the castle to find the stake and pull it from the ground.

You’ll need to climb, glide or high jump to reach the third stake which is quite high up the side of a cliff. Travel to the Pokécentre in front of Mesagoza from Los Platos road and continue north-east. Turn to face the south-west and you’ll see the castle walls and Pokécentre as well as the third stake. Pull it from the ground to continue.

The fourth purple ominous stake is situated to the east of the city of Mesagoza in the South Province. The terrain resembles a desert here, and the stake is at the top of another hill. The stake has Mesagoza to the west and a Pokémon Centre directly in front of it.

The fifth purple ominous stake is in the South Province (Area Five). There are no real landmarks nearby, but it is atop a spiraling hill which overlooks Mesagoza and is also north-east of Los Platos.

The sixth purple ominous stake overlooks the lighthouse from the beginning of the story. It’s located near a trio of small lakes to the south of Los Platos.

The seventh stake is located a short way from the final stake and opening to the shrine. It is between Mesagoza and Artazon in the East Province (Area One) at the top of a small area of land that slightly juts out from the main world map.

The final stake is located near a lake near the border between South Province (Area One) and South Province (Area Five). The closest landmark is Los Platos Pokémon Centre, but this is still some way away. It is located at the top of a hill with Los Platos to the north-west. There’s also a Pokémon Centre to the north-east of the stake. Pull out this final stake and you’ll hear a “mysterious” noise.

Spoiler alert: What happens when the stakes are all collected is detailed below, do not read ahead if you’re looking to avoid this information.

Once all stakes of one color have been collected, the shrine door will unlock and approaching it asks the question: “Do you want to touch the shrine?” Selecting yes will make a Legendary Pokémon emerge from the shrine and engage in battle. It’s a good idea to disable auto-saving before this happens and manually save so that you have more than one chance to catch it should you accidentally kill it, or if it wipes your team.

We found a good approach was to go armed with plenty of Poké Balls as well as a Pokémon up-front that could withstand heavy attacks and had the ability to put the Pokémon to sleep. Once asleep, it was much easier to catch.

Wo-Chien is the Legendary Pokémon unlocked at the purple shrine, and is a dark/grass type Ruinous Pokémon with the Tablets of Ruin ability. This ability lowers the attack of all Pokémon except itself, making it incredibly powerful. This snail-like Legendary Pokémon is the first of four to battle and catch via the shrines in the Paldea region.