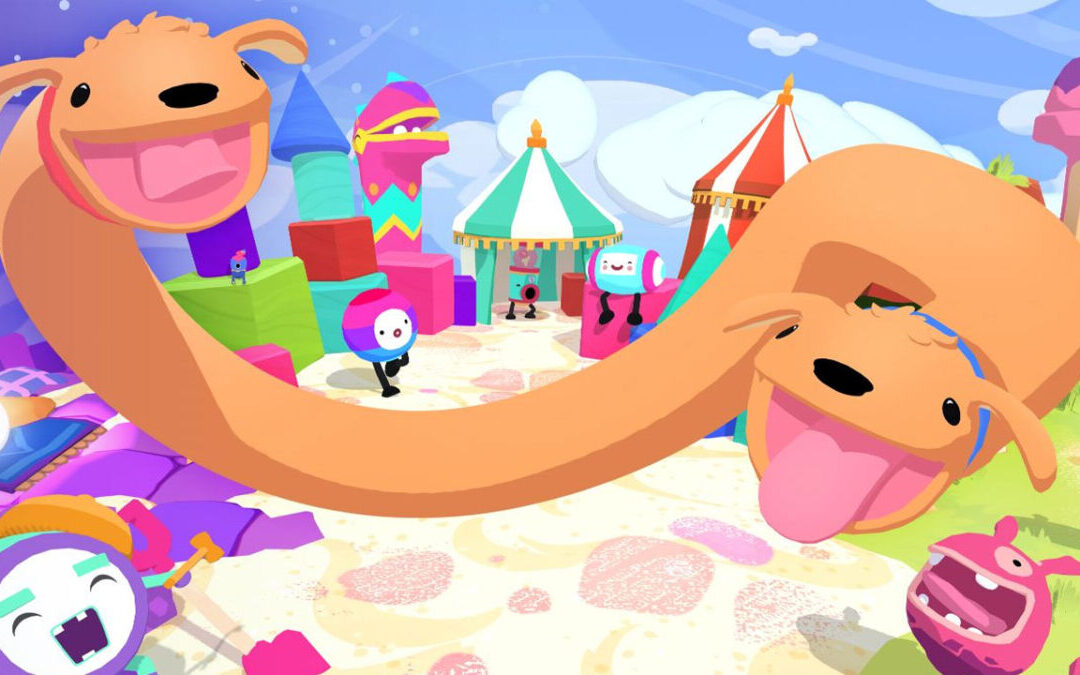 Couch co-op games can require lots of communication and teamwork at the best of times. Games like Overcooked and Moving Out test the limits of you and your partner’s abilities to efficiently complete objectives without calling each other names, and oftentimes we fail in that task. However, in those games, you’re at least blessed with your own body, so what happens when you’re two cute dogs sharing one cute belly? PHOGS! happens, and it’s incredibly heartwarming fun.

Two or more players sharing the same body in a physics dictated puzzle game isn’t new, considering the likes of Octodad exist, but while everyone’s favourite gangly limbed octopus shot for comedy, PHOGS! attempts to charm the pants off its players with its lovingly crafted worlds, a brilliant array of puzzle mechanics and plenty of cute interactions with the denizens of PHOGS!’s various realms. 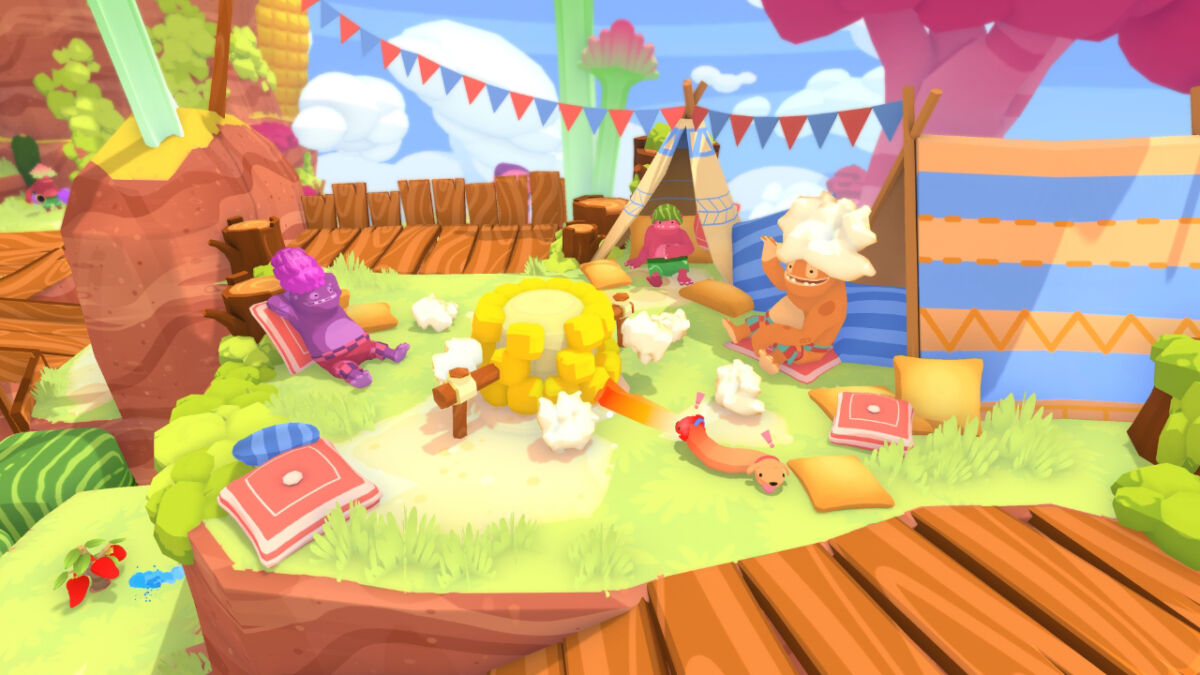 Players will explore three distinct worlds based around the themes of Food, Play and Sleep, which are like the three base moods for all dogs without venturing outside of being rated E for Everyone. Each of the themed worlds leans heavily on their chosen style, while still managing to create levels and areas that feel unique and engaging.

One of the best things about PHOGS! as a game is the fact that the level design is so varied, despite its simplicity. The controls themselves are incredibly easy to understand, especially in co-op with two controllers. The bumpers control bark and bite, while the triggers allow you to stretch your belly out to cross gaps or access hard to reach locations. There’s emotes on the d-pad and face buttons, but other than that, you’re good. 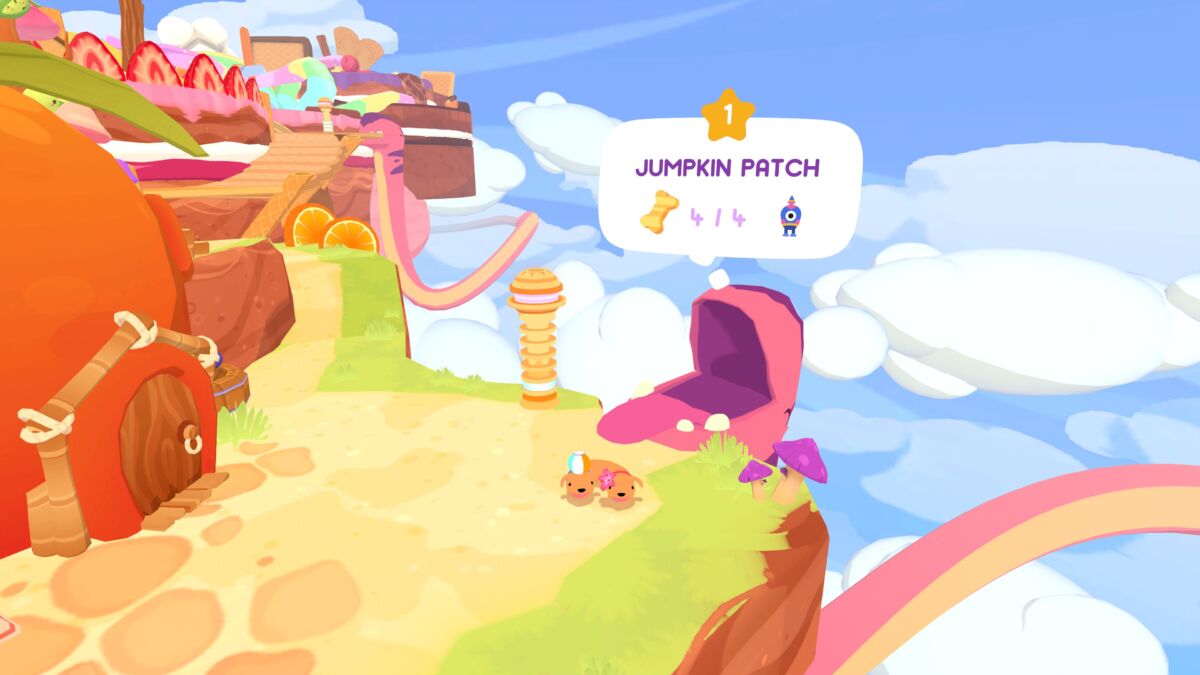 Admittedly, playing on a single controller is a little bit more confusing as one side of the controller powers one PHOG head, while the other side controls the other. It could be used as a co-op mode where two players are holding the same controller, or just for if you’re playing alone, but PHOGS! does lose some of its appeal when played solo compared to co-op play.

Controlling two heads at the same time can become a bit confusing, especially when you’ve already played the game before with a friend. There’s still online play with friends though, and considering the game will be on Game Pass, you should be able to find some to play with you. Just consider this your one warning if you were planning on playing PHOGS! solo. 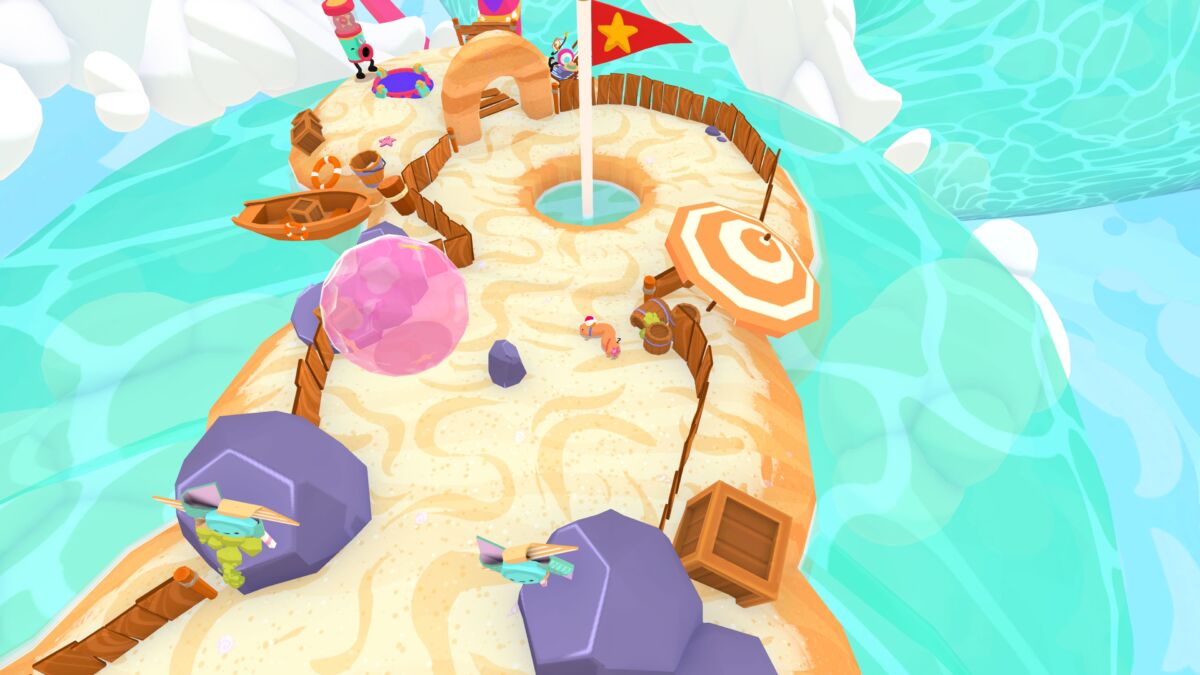 The brilliant control scheme helps make the level design even better as developers Bit Loom Games manage to do so much with so little. At a base level, you’ll be using the PHOGS to push and pull items around a level for you to reach new areas, but there’s so much more than that on offer.

PHOGS!’s brilliance comes in the fact that the world themes are stretched, much like the belly of the PHOGS themselves, to accommodate various influences, sources and gameplay ideas. The Food levels could have easily been a nice bit of setting dressing without influencing gameplay, but you’ll be completing puzzles that include putting toppings on a pizza, using fire breath chili to cook someone’s popcorn or creating a stew for a 100ft tall octopus. 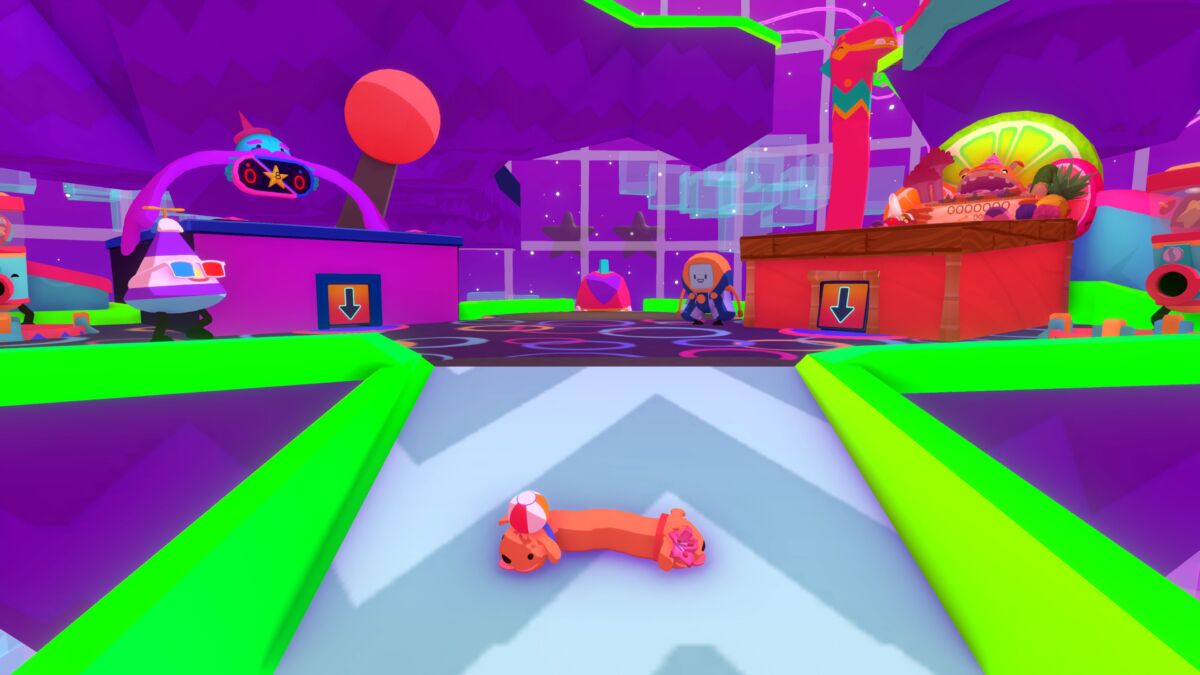 The biggest highlight is likely the Play level, which bounces from sunny days at the beach to an arcade complete with a PHOG assisted claw machine, to levels that feel more reminiscent of a children’s toybox. Aesthetically, the sleep level might be the least visually interesting, just because it’s all night levels in different kinds of castles, but the gameplay more than makes up for it with levels playing around with time, gravity, darkness and light and more. There’s some big highlights in this world, gameplay-wise.

Even by the final level, PHOGS! is throwing new ideas and mechanics at you, and while that might sound confusing, those ideas usually exist in their own puzzles or levels. Instead of playing 20 levels worth of gimmicks, you’re learning the ins and outs of each level individually, adding to the variety. It’s a joy to go from one level to the next, wondering what else you could possibly see. While I might have listed a bunch of them here, it’s barely scratching the surface. 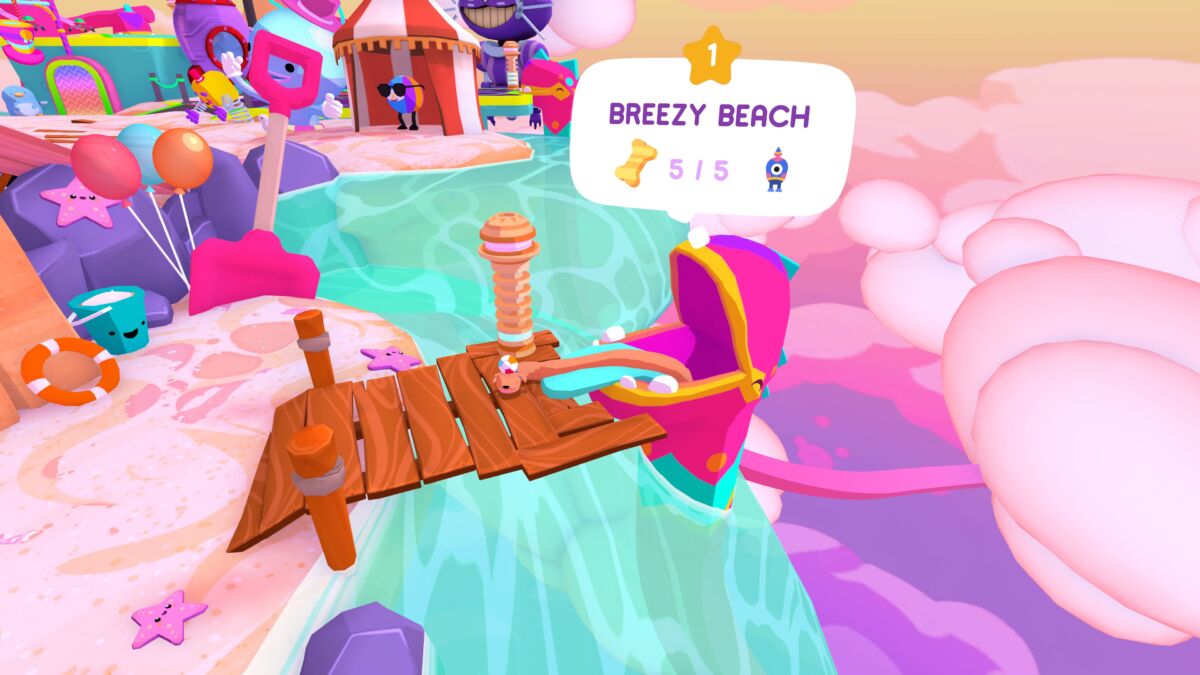 Each level is also filled with additional collectibles to find such as bones, which are often unlocked by exploring the level or by completing certain tasks within the level, and “Boingles”, which are purple rocket looking items that are often found in deep nooks and crannies between the level. While you could easily speedrun your way to the end of the level, PHOGS! rewards players who take their time and fully explore the levels, making for a more rewarding experience as a whole.

The creatures that inhabit each level are also worth the journey, as they’re filled with imagination and joy. Whether it’s the cute teddy bears of the sleep area or the big, excitable buffoons that inhabit the food area, they’re guaranteed to elicit a positive response from you, from “awwww”, “ooooh”, or a bit of a giggle. It’s usually “awww”, especially when you find out you can be petted. It’s the cutest thing ever. 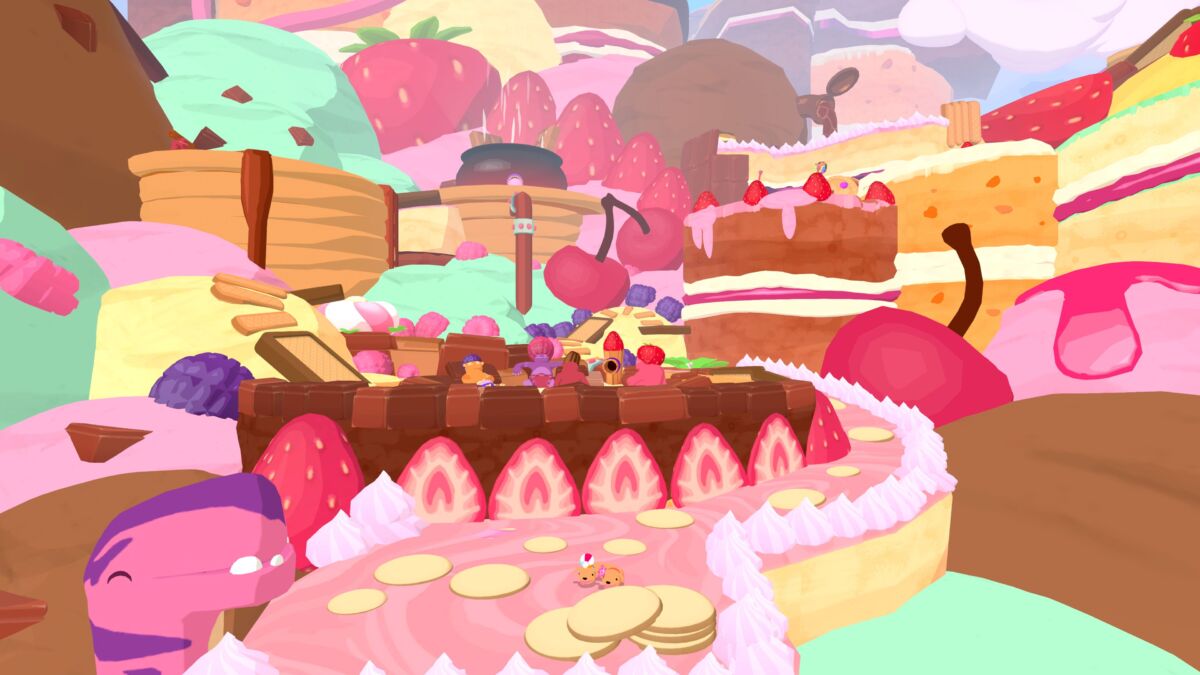 It’s worth noting that PHOGS! isn’t exactly the most refined game ever made, suffering some of the same trappings that other physics based games have. A small amount of the puzzles can be a bit hit or miss, with one in the Play world involving pegs and holes leaving me stuck on the other side of a chasm. It’s also easy to get stuck in the scenery sometimes, but you can always respawn from a checkpoint. These aren’t major issues.

I’ve harped on this point a lot over the past few months in various articles, but 2020 has been a bit of a goddamn chore, and a lack of connection with others is a big part of that. Personally, PHOGS! is a brilliant antidote to the trials and tribulations this year has had to offer, much like Animal Crossing was back in March. While they’re two completely different games, both serve the purpose of connecting people through gaming. In PHOGS!’s case, that connection comes quite literally due to their stretchy belly.

PHOGS! is absolutely brilliant, and a perfect end to what has been an exhausting 12 months. If you and your partner or friend are looking for a way to spend 10-12 hours filled with nothing but utter delight, PHOGS! is ready for a walk.

A code for PHOGS! was provided by PR for the purposes of this review. 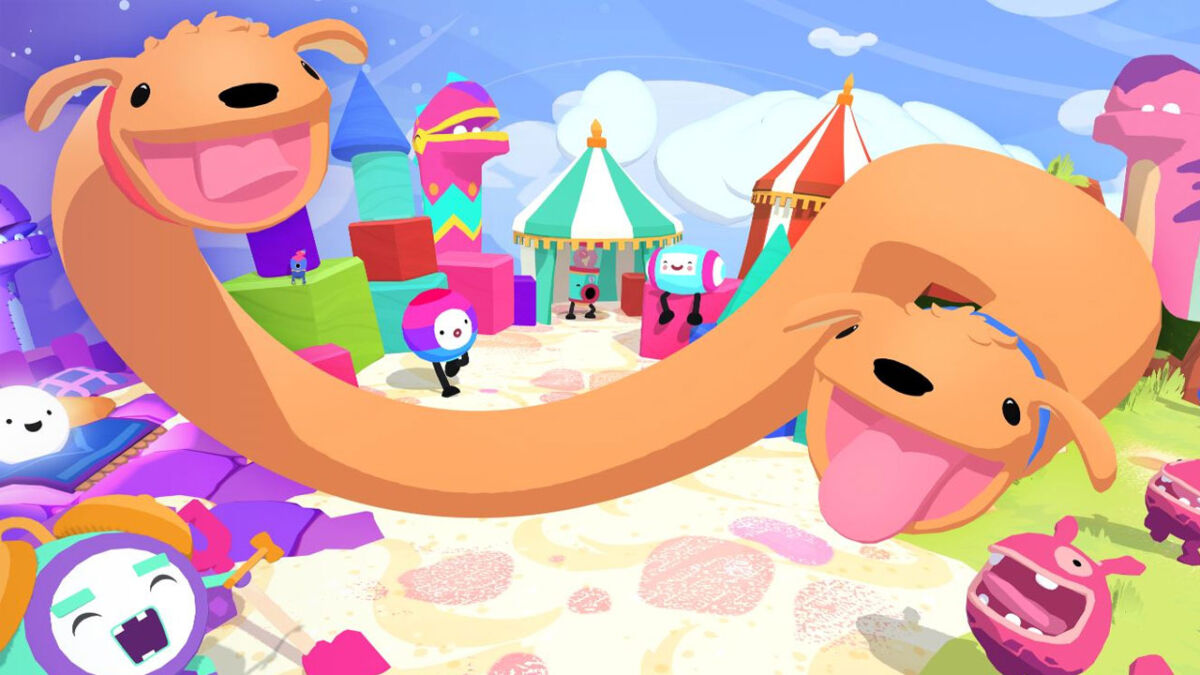 Verdict
PHOGS! is possibly one of the best co-op games ever made and the perfect remedy for a hellish 12 months.
9
Cultured Vultures is a pop culture website established in 2013 covering all things gaming, movies, and more. We eat your words.
All The News On The Biggest Games