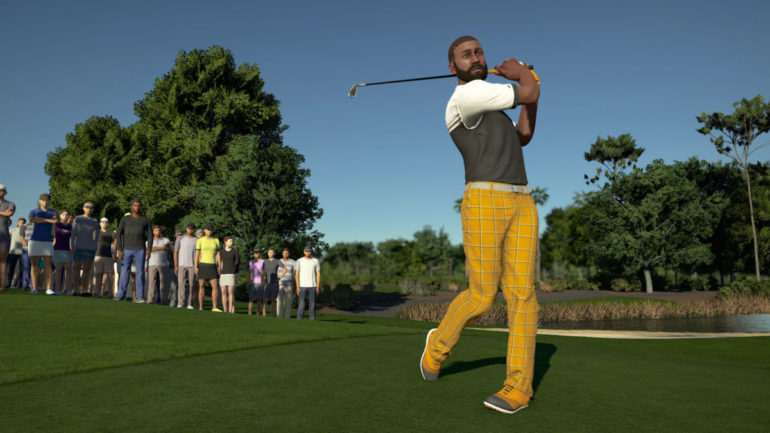 After being announced earlier this month, 2K Games and HB Studios have revealed that PGA Tour 2K21 will be coming to all major platforms (PC via Steam, PS4, Xbox One, Nintendo Switch and Google Stadia) on August 21st, and it’ll come with some, let’s just say, interesting microtransactions.

Check out the trailer below.

PGA Tour 2K21, which is a rebranding of The Golf Club series, features a full PGA Tour license, with an updated Career Mode where players can compete to win the FedEx Cup. The game will come with licensed pros, the ability to create your own courses and form online societies with fellow players. Feel free to shout “we live in a society” in the middle of your clubhouse.

As you’d expect from a 2K Sports game though, PGA Tour 2K21 will feature microtransactions. While the official website and video doesn’t mention how the microtransactions will work, a Microsoft Store page has revealed that the currency can be used to “personalize your PGA TOUR 2K21 MyPLAYER with the best gear, raise the stakes in Skin Matches and run Online Societies tournaments like a boss”.

Using currency to customise your MyPLAYER in a 2K game isn’t uncommon, but it’s the other uses that are sure to raise eyebrows. Spending currency to set up online tournaments seems a bit off, essentially encouraging players to use real money to access one portion of the game, but raising the stakes in Skins matches is another level entirely.

Skins is a Match Play game type where golfers compete for the lowest score on each hole. The player who wins the hole wins the “Skin”, which is typically a monetary value of some kind. While the wording isn’t clear, it reads like players will be able to gamble their currency in online Skins games, which would be a slippery slope to say the least.

In GameSpot’s coverage of the game’s announcement, which includes an interview with cover star Justin Thomas, they state that the game’s currency can still be earned in-game, but only mention cosmetics: “Like 2K’s other sports games, PGA Tour 2K21 will use virtual currency (VC) as a means for players to unlock cosmetic items with real money. All of the items can be earned through gameplay, but spending money on VC will speed up the process.”

In our opinion, this still flies in the face of 2K’s insistence that the game’s currency only affects cosmetic purchases, regardless of whether or not you can still earn this currency in-game. Clearly, the currency is heavily tied to online gameplay features, letting players spend real world money to access and create online society tournaments, or to gamble in private Skins matches.

Many players out there are likely thrilled to see a fully licensed golf game once again, but PGA Tour 2K21’s microtransactions make this hard to celebrate. We’ve reached out to 2K Games for a comment, and will update this article if or when we hear from them.

MORE GAMING:
– The Culling Coming Back To Xbox With Pay-To-Play Matches
– Biggest New Games of 2020 & Beyond
– What The Golf? Coming To The Nintendo Switch Next Week