Too difficult for its own good. 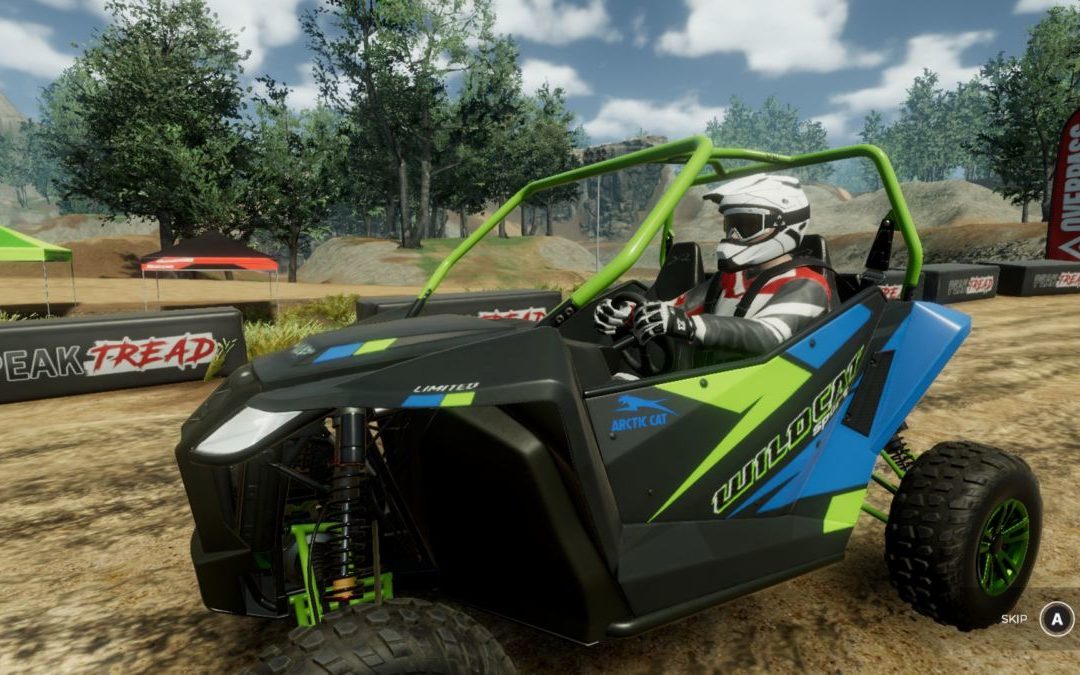 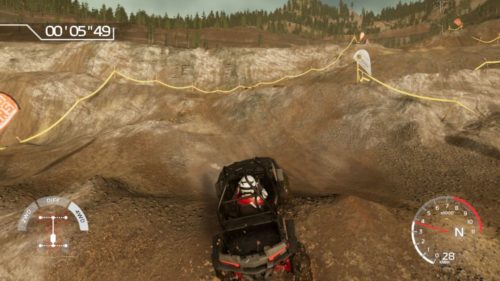 Overpass is probably unlike any racing game you’ve played before. That’s largely because the game is not just about going as fast as you can, but rather making sure you actually get to your destination in one piece. Swedish developer Zordix Racing has flipped the genre around so that driving becomes much more about precision than outright speed. It’s a strange mix of Trials, MudRunner, and ultra realistic rally games that will constantly test your patience and concentration.

Shifting the focus away from simply trying to go as fast as possible is an interesting take for a racing game. After all, practically every type of racer will judge you on how quickly you can get to the finish line. In Overpass, things are not quite as simple, with the emphasis instead put on trying to carefully navigate a variety of obstacles in the most efficient manner. It actually encourages you to take things slowly and think about what you are going to do, evaluating what is the best course of action. 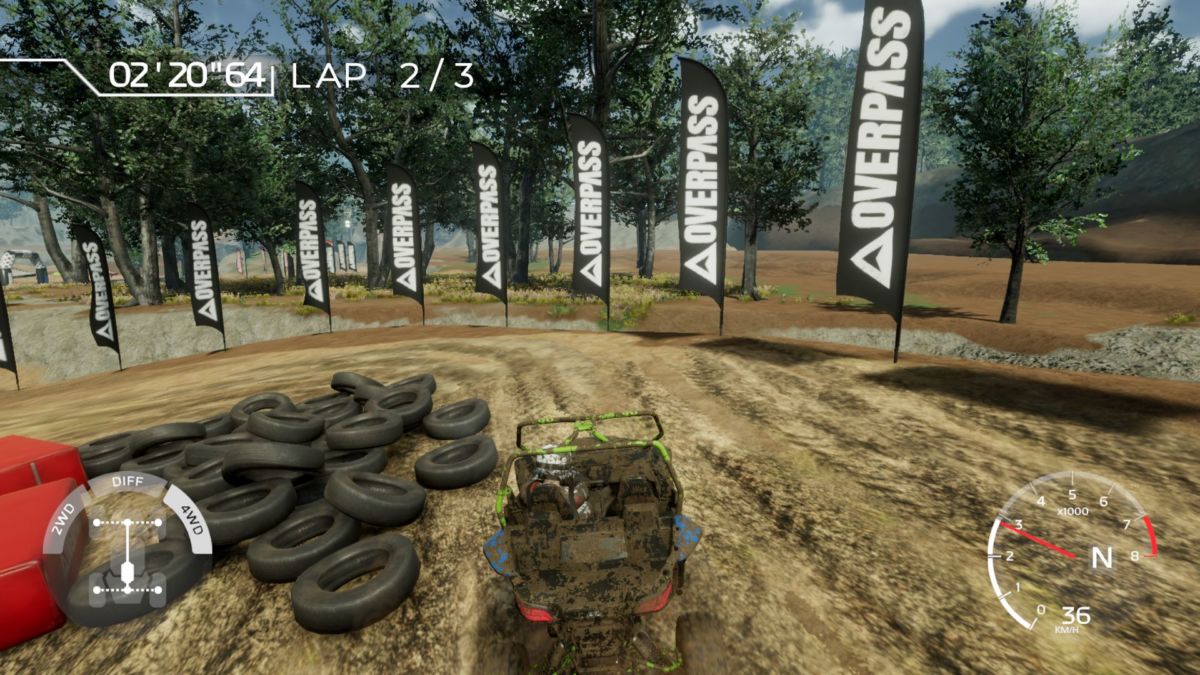 This means getting concepts such as following the racing line and hitting the apex on corners out of your head. While these apply to most racing titles, they are completely useless in Overpass and will offer you no help. Each event is littered with obstacles and difficult terrain that can only be passed through careful driving. These can include everything from huge rocks to logs and tyres, although there are also more elaborate barriers such as seesaws. To get past them, you have to keep your foot tapping the brakes as you angle the tyres and try to precisely maneuver your vehicle over them.

Driving in Overpass comes in two distinct flavours, as you can either get behind the wheel of a racing buggy or a quad bike. Regardless of which vehicle you decide to drive for each challenge, the action will take place entirely off-road. There are subtle differences in the approach to both vehicles that you will have to take into account. For example, with the ATV, shifting the weight of your character around is vital for being able to get over obstacles and safely navigate corners or hills. Meanwhile, the buggies require careful use of the throttle and suspension, switching between four-wheel and two-wheel drive while also deciding when to lock the differential. 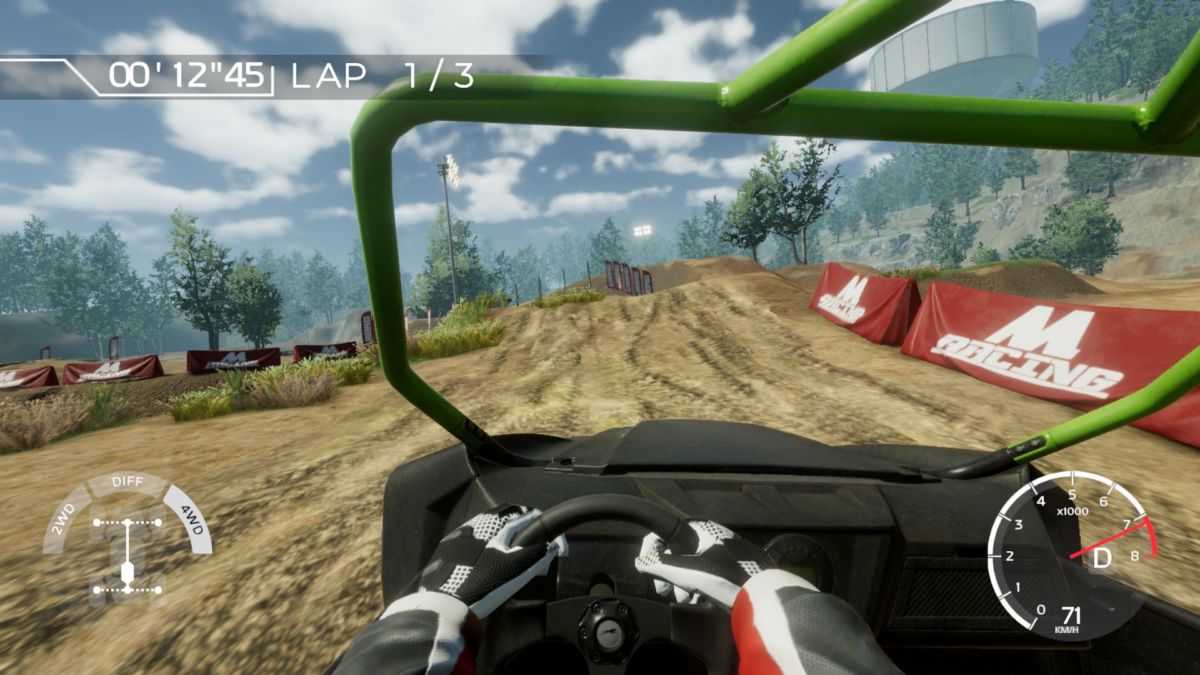 That’s not to say that you are always moving along at a slow place like in MudRunner because there are lots of moments in Overpass when you can pick up the pace. You just have to be extra careful when you do, as hitting a bump or taking a corner slightly too fast will more than likely end in disaster. One wrong move can ruin an entire run so you have to deliberately judge when to put your foot on the accelerator.

All of this makes Overpass a very technical racer that can easily become tedious and frustrating. No matter how hard I tried to master the various techniques that are explained in the complex tutorial, nothing ever became intuitive or natural. Instead, some challenges felt like a struggle of willpower where you simply cannot make any progress. Overpass constantly tells you that you can take multiple paths but there are always points where you are funneled into a certain section. It is often in these areas where I hit a brick wall, stuck in position for minutes at a time with nothing able to help me get over a set of rocks or get up a steep hill. 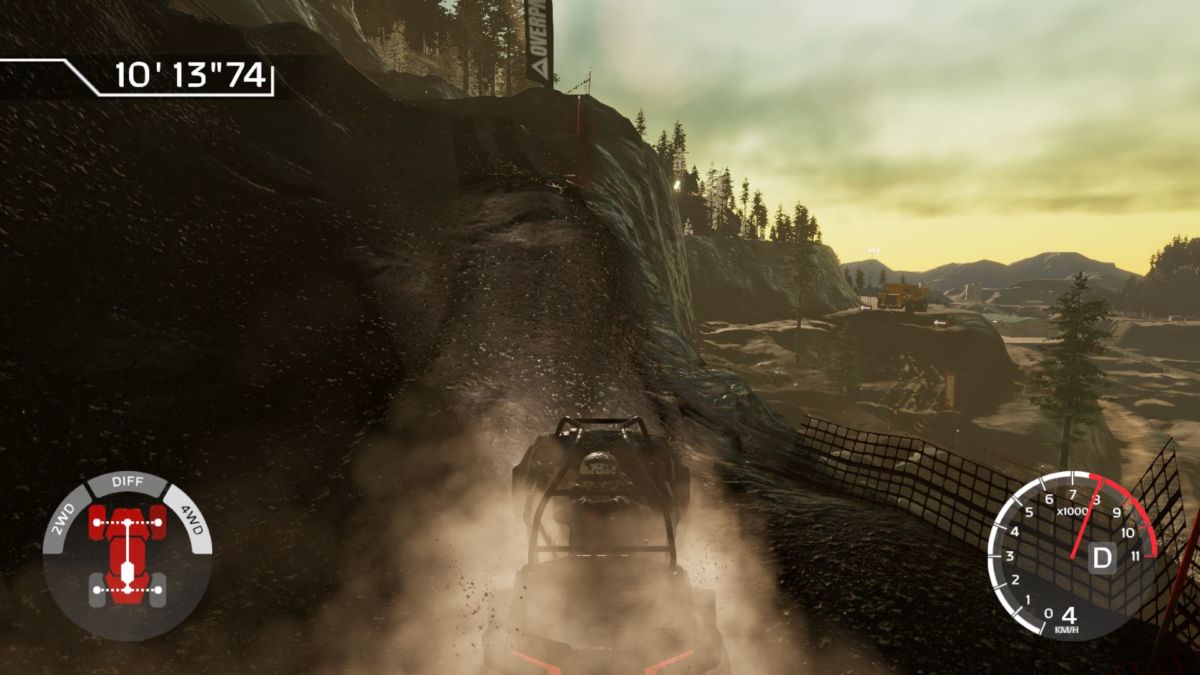 Even more annoying, though, is the fact that you can’t even skip events as only a few are available at a time in the career mode. Fail to complete one and you only have one or two options in terms of what you can do next before you have to go back to the event that you are stuck on. This is much more of a problem on the hill-climbing challenges, which act like a rally stage as you go from point A to point B, as they tend to feature much more demanding hurdles. The obstacle course races are more fun and generally a bit more forgiving. They see you racing three laps around a course filled with different impediments to overcome, giving you the chance to master the track and get into a flow that can be quite enjoyable.

But the problem is that these moments are too fleeting. More often than not, Overpass feels like a time-consuming slog that you are forcing yourself to play rather than actively enjoying. The frequent times when your wheels will just be stuck spinning aimlessly or you slip and roll down that muddy hill for the 20th time quickly take a toll. Few games require you to take a step away from the console and calm down as much as Overpass does. 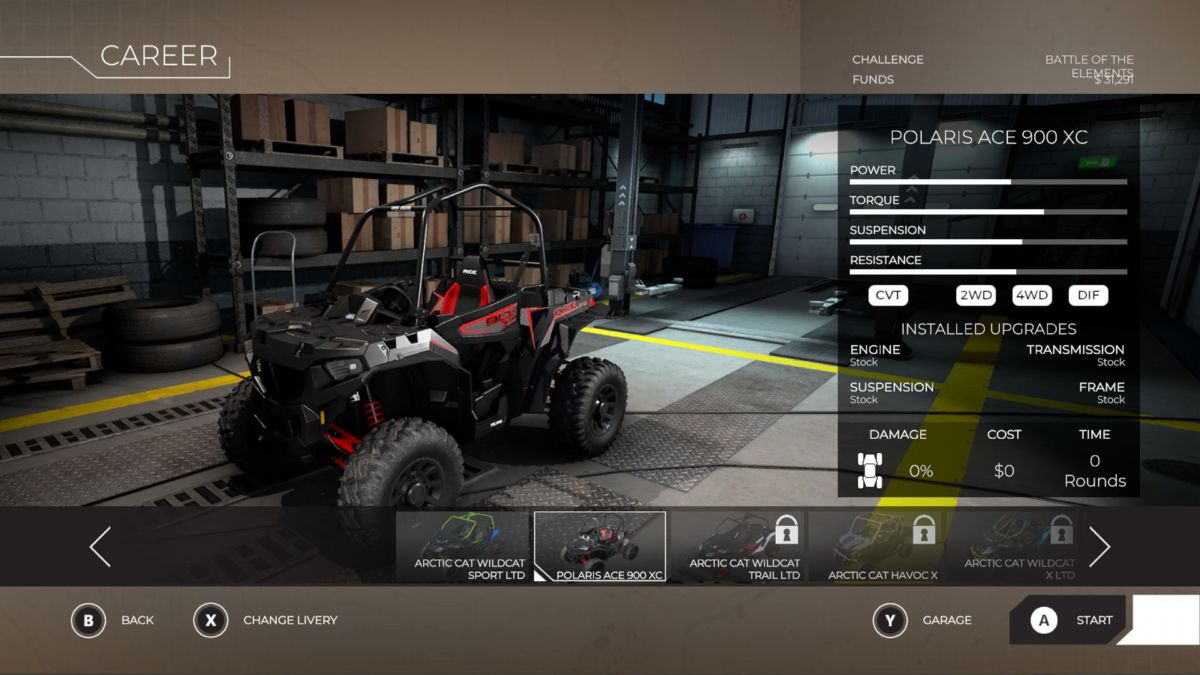 For those that can manage to make it through the career, there are lots of options available for upgrading your rides or buying new vehicles. Different purchases offer boosts to the stats of your buggy or ATV, giving you the ability to have more torque, better suspension, and extra power. The only problem is your funds are often limited due to the repairs you have to carry out on your vehicles after each event. If you’ve taken a few tumbles in the previous challenge, these costs can quickly add up and leave you with little money to do anything with. While this has seemingly been added to increase the realism aspect, it ends up being just another pain you have to suffer through.

Overpass comes with a few modes outside of the career, including quick races and custom challenges. There’s also a sandbox available for those who want to invest a lot of time in the game, filled with everything you need to really try to get to grips with the driving techniques. In terms of multiplayer offerings, there is online and local split-screen, which is a nice addition that many other racing games lack. Of course, finding another person willing to join in is going to be your main challenge as playing with other people doesn’t add any extra fun.

On a more positive note, Overpass does have some redeeming features when it comes to the presentation. It looks gorgeous even when played on an ordinary Xbox One with no fancy graphics settings. With a nice range of environments, there is also a lot of variety in terms of where you will be racing, but all of them look great. The lighting is realistic and little effects like your tyres leaving tracks in the mud or gravel help Overpass feel like a living world. The sound effects are equally impressive, but they can soon wear thin during challenges as you can only hear the screeching of wheels and the engine without anything to help drown them out. There are also some issues with screen tearing and the framerate, especially when there are moving obstacles on the screen.

The idea of Overpass might have sounded good on paper, but the execution leaves players with a game that is at best boring and at worse unbearably frustrating. When you get stuck, and you almost certainly will many times, it becomes disheartening to the point where you just want to turn off the game and try something more enjoyable. Racing games are often about the thrill of going fast and the excitement that comes from overtaking opponents. Overpass seeks to replace those feelings with the satisfaction that comes from perfectly maneuvering through a course with expert precision. However, it fails to elicit anything other than relief when you finally manage to overcome a barrier that has been blocking your path for what seems like an age. The time and effort needed to get good at this game is just not worth the price of trudging through hours of annoying tedium.

A copy of Overpass was provided by PR for the purposes of this review. 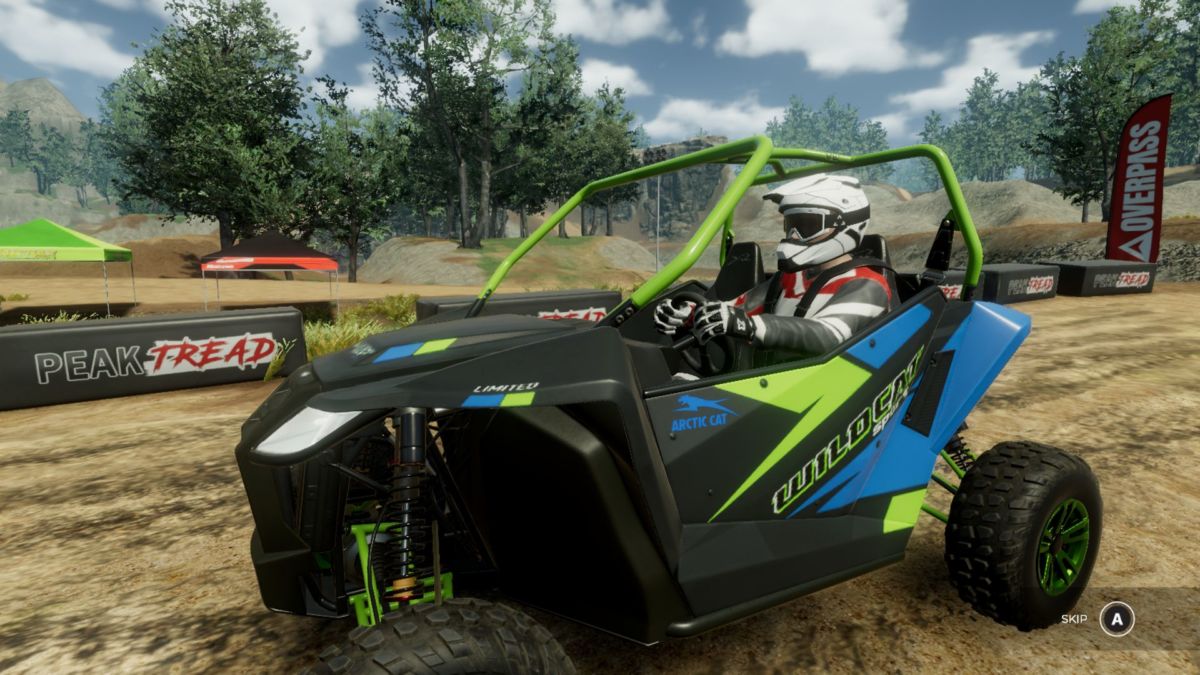 Verdict
A dedication to being as realistic as possible means that Overpass is a dull and frustrating experience that is too difficult for its own good.
5
Cultured Vultures is a pop culture website established in 2013 covering all things gaming, movies, and more. We eat your words.
All The News On Your Favourite Games