The Old Man And The Sea Is Taut, Tense And Beautifully Conceived 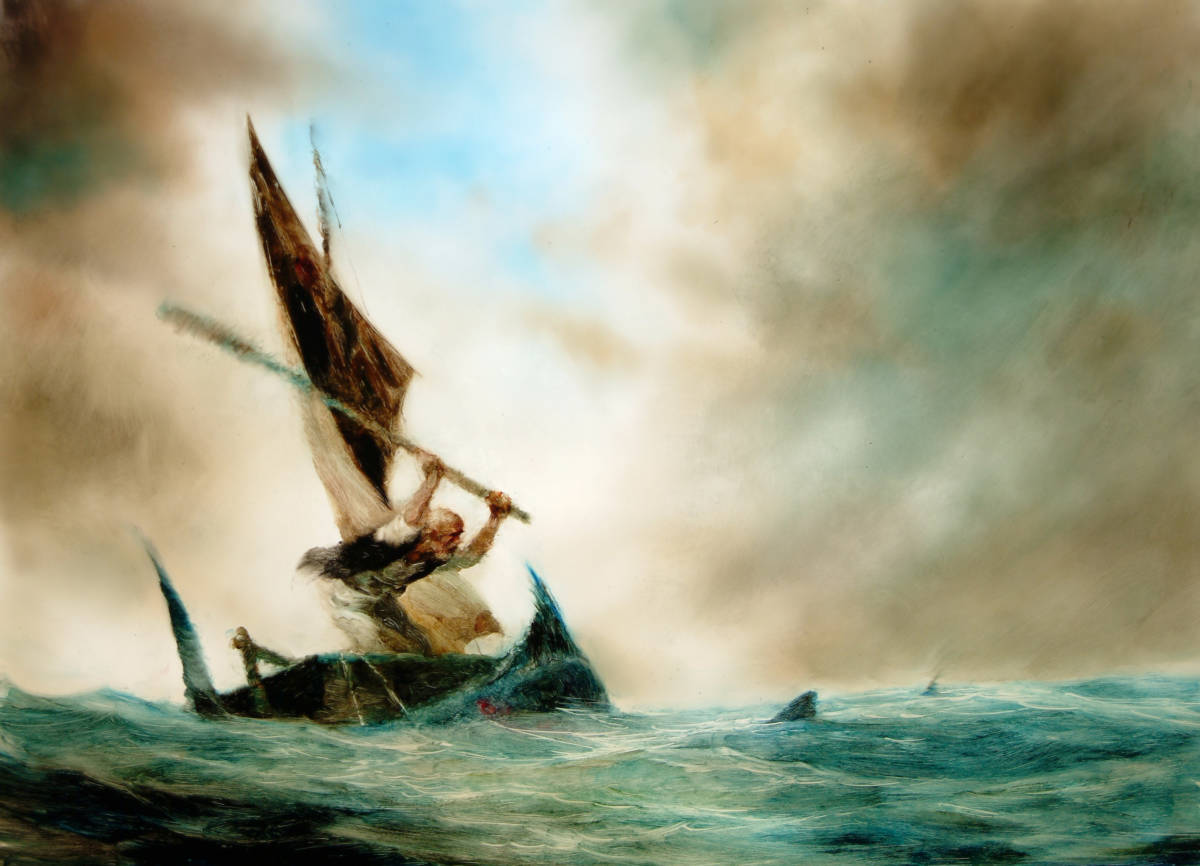 I love it because it’s so taut. It’s got the razor-sharp edge of a philosophical allegory, but it’s shot through with layers of complicating ambiguity. It’s rigid and had something to say, but it’s not a treatise. It’s softer and more forgiving than that. It’s messier, more human. The Old Man and the Sea might have an edge, but it’s never uncouth. It’s about an old Cuban fisherman, Santiago, who goes 84 days without catching a fish, and who, on the 85th day, latches onto the biggest fish he’s ever seen. The fish drags him out to sea for three days straight but Santiago, driven by a fisherman’s pride, refuses to let go. The result is a duel between man and the elements, one so gloriously tense and beautifully conceived you’ll want to eat this little book whole in a single, dream-like, sitting.

What makes this book tick is Hemingway’s subtle handling of tension. For all its literary chops, this thing’s paced like a thriller. It’s an exercise in vicariously felt anxiety. Tensions are up the second the story begins. Santiago hasn’t caught a fish in 84 days, after all, and that economic struggle lends the opening pages a desperate sort of edge. Economics doesn’t really come into this story, but we’re already being asked to wonder exactly how much this old man has left in the bank and how long he’s going to be able to continue to sustain himself. Without really needing to hammer it down our throats we know Hemingway’s protagonist is staring down the barrel of the poverty trap. He has to catch some fish and we know, though Hemingway doesn’t need to tell us, that he has to do it soon. So, when he finally, does, when that big fish bites, we share his desperation, his cautious hope, his tempered expectations.

When the fish powers off into the sea, taking Santiago with him, there’s a sense of economic immediacy that propels us along with him. We’re trapped, suspended by the knowledge that it could go wrong at any time, that Santiago’s line is always at breaking point; that the fish could dive, or break loose of the bait and the old man will lose him, that he’ll return empty-handed again. The desperate reality of this man’s struggle – to eat, sleep, and to outlast the fish – is a narrative constant and Hemingway is always pulling it tighter, tauter, to the point where, at its worst, it’s impossible to look away. Without spoiling anything, Hemingway never lets up. Even when we think Santiago’s struggle is over, he finds a way to make it worse, to make his struggle somehow more difficult.

That’s not just it, though. As thrilling as it is, The Old Man and The Sea is more than just a thriller. Hemingway’s prose is distant and detached, it never refers to Santiago by name, but it’s human nonetheless. What’s not said shines through with all the poignant lucidity of what is. Santiago -who might otherwise seem impossibly strong, impossibly tough- has moments of pressing self-doubt. At times, he regrets pursuing the fish, doubts whether or not he can catch it, or whether or not he even should. His journey, though physical, isn’t exclusively athletic. He has to overcome his own doubts, his own fears, and he has to do them at pertinent moments. Hemingway’s a master at this, at aligning character uncertainties to fever-pitch plot points. Santiago doubts himself not when everything’s running smoothly, but when it’s all on the line; when the fish jumps and he has a chance to kill it, when there’s very little food and he wonders if he’s strong enough to carry on. What makes Santiago so admirable -and Hemingway’s message so punch-drunk powerful- isn’t that he’s strong and determined in and of himself, it’s that he overcomes his concerns. It’s that the only difference between him and anyone reading, is that he overcomes what’s worrying him.

He’s softened, too, by his love of things outside the plot, things which shouldn’t make a difference but do. It’s hard not to be sympathetic when Santiago dreams about lions, or talks aloud to himself and the fish because he’s lonely and misses his apprentice, or when he keeps himself going by thinking about ‘The Great DiMaggio’, the American Baseballer he idolises. It’s tempting, as a critic, to give DiMaggio and the lions a sort of allegorical weight. And maybe they’ve got it, maybe they are metaphors. Maybe DiMaggio ties The Old Man and The Sea up into a peripheral American narrative and, from there, to a blossoming Cold War, one which might demand the very perseverance that Santiago embodies. Or maybe they temper our understanding of Santiago’s pursuit as noble, as natural or Athletic, as part of machinations and ideas bigger than himself. Or maybe they don’t. These little edges might mean something, but, beautifully, they don’t really have to. More than anything, they make Santiago human. A being with human interests and human mannerisms, rather than just a vehicle for Hemingway’s story, a force of nature driven to physical feats bigger than himself. Human beings are weird, their edges rough, and not everything fits as cleanly as you’d like it to. Hemingway remembers that here, and he sticks to it.

There are things wrong with this book, sure. If you read the plot synopsis and asked ‘why doesn’t he just cut the fish loose?’ you probably don’t deserve the eyes you use to read. But you’re nonetheless clawing in the general direction of something profound. The book, for all its myriad merits, is a little self-serious. It could benefit from an of its own absurdity, of Santiago’s endless strength or the fish’s incredible size. It has other problems, too. I love this book, obviously I love it, but it’s regressive. So much so, that books like Mary Shelley’s Frankenstein were satirising its macho worldview two hundred years before it was published and there isn’t a single female character in sight. Likewise, the socialist in me hates the way this book romanticises a working-class struggle. Hemingway lends Santiago’s life a romantic simplicity; his life boils down to him, the sea and his newspapers. Though economics has a part to play here, the story soon becomes much bigger and quickly becomes about pride and about the beauty of doing something you love for its own sake. Hemingway seems to ignore the fact that Santiago, that the working class in general, never quite get that luxury and that working-class labour is, almost invariably, gruelling and intellectually unfulfilling. It’s a little bit egregious, an implicit endorsement of tragic working-class realities. And it doesn’t sit well in the age of austerity.

For all this book’s faults, for everything that’s wrong with it -the machismo, the classist usurpation, the sexism, the humourless absurdity- this novel, propelled by a tight plot, lucid prose, and a life-affirming brilliance, is well worth reading. It moved me. Let it move you, too.