"I'm also just a girl, standing in front of a boy, asking him to love her." 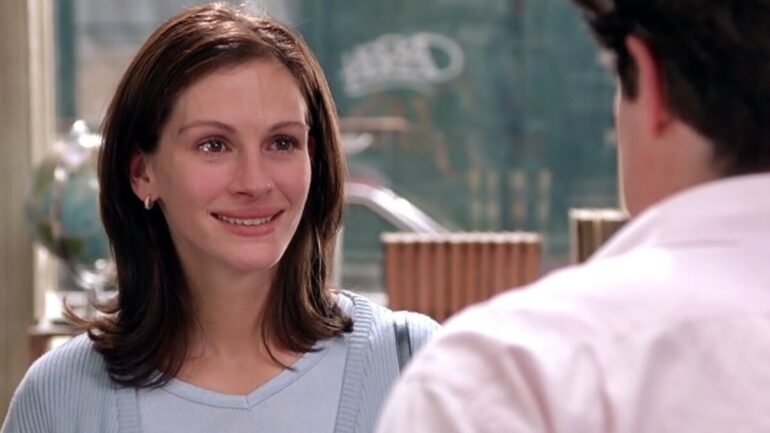 A staple in the rom-com is none other than the declaration of love, usually done in a public space, rendering all us watching into swooning saps. Or maybe we were already saps to begin with. There is no rom-com that does this better than Notting Hill, so much so that you probably know the scene and the extremely quotable piece of dialogue involved.

Notting Hill is an exercise in subversion – it never goes how you think it will, with conflict after conflict set up between Anna (Julia Roberts) and William (Hugh Grant). Just as you think the two are going to get together, Anna’s boyfriend shows up and things end. When she turns up at William’s house to seek refuge from the media, they do get together, only to be torn apart. Then he puts himself out there, going to her film set in the hopes of seeing her and mending things. He overhears some offhand comments she makes to her co-star, assumes the worst, and gets out of there to save what’s left of his broken heart.

Also, in an interesting shift, Anna is the pursuer. She is the one who kisses him, who calls him and invites him out to see her – where he gets stuck doing the press circuit, which is just hilarious – and she is the one who asks him out and invites herself to his sister’s birthday dinner. So it makes sense that she would also be the one to declare her love for him. And many of us probably noted the way colour symbolism is used to emphasize this, since in the scene she’s wearing blue, while he’swearing pink – blue has associations with the masculine, and pink is tied to femininity. The actors do all the heavy lifting here, and in lesser hands, this scene and this film wouldn’t have the impact it had.

William rejects her in an attempt to protect himself, knowing that he was already devastated from all their brief interactions, that to say yes would mean a deeper pain later on. Roberts does great work here, as Anna stands before William and accepts his decision and the hand she played in it, unable to mask her disappointment and sorrow, yet trying to walk away graciously with her pride intact. Finally, William lays on the table the issue that has been a major source of conflict in their relationship, which is her fame.

She stays with a boyfriend she no longer loves because it’s easier to pretend than to have something real, she cannot be free to decide if she wants to be with William because of the media and her image, and she tells her co-star she feels nothing for William because she doesn’t want there to be gossip about her personal life.

Yes the fame and celebrity is an issue, in the sense that it made Anna construct walls around herself. Her guard is up all the time, because she doesn’t know if she can trust the people she wants to get close to. When she hides out at William’s house to evade the media, and finds them at his doorstep the next day after they’ve slept together, all she has in her head is betrayal. In that moment it was easier to blame him, to rain fire and brimstone upon his head, even though deep down she knows he wouldn’t leak her whereabouts to the press.

So when he says no to her, it’s heartbreaking but she understands – she hasn’t been the best to him. Yet, she makes a point to insist that the fame thing isn’t real, and it isn’t. The issue was with Anna, and it’s Anna asking him for another chance. This whole time, we’ve been with William through his heartbreak; we saw the difficulty he had in moving on despite encouragement from friends and family, unable to escape her face and image. We judged Anna’s behaviour as cold and impervious, but it’s only at this moment that we see how affected she is and how affected she must have been to walk away from him all those times before.

At the end of the day, underneath the roles we perform, we are all just individuals who want to be loved; Anna is just a girl who wants to be loved by the boy she loves. The silence after she says that, the stunned face of William, who is utterly speechless by this declaration – so are we all – and then he stands there and watches her walk out of his store — and possibly his life — forever.

For William, and for some of us watching, he’s made the right decision. All the times they separated was due to a decision on her part, while William put his heart on the line again and again, only for it to be trampled. Then why is he a “daft prick” for not accepting her declaration? Maybe because they have never tried with a true open field, with everyone’s intentions clearly on the table. Also, falling madly in love with someone, and having them reciprocate is rarer than we may think. It’s no coincidence that Hugh Bonneville’s Bernie says, “Well, that’s nice […] Anyone saying they want to go out with you is pretty great, isn’t it?”

In this brief moment, we feel Bernie’s loneliness, and realise that being logical and practical also means that William ends up alone. Sure, he has his family and friends, and if he chose to stick with his decision, he would have been just fine. But if there’s a chance to lead a happy life with someone who is crazy about you, shouldn’t you try to seize that opportunity?

Which leads us to William’s declaration of love at Anna’s press conference. What’s interesting is how each of them profess their love in a setting familiar to the other – Anna does so in William’s bookstore, while he does it publicly, centre-stage, with tons of press and cameras surrounding them. He isn’t shying away from the fame aspect, and she isn’t either, confirming her feelings for him in full view of everyone, yet both doing so in a way only the other understands.

What Notting Hill does so well is establish the leap of faith needed after a romantic declaration. There has to be stakes involved, both with something to lose, yet choosing to take the leap anyway. William also chooses to be the bigger man, because to be with Anna is to forgive and move past all previous mistakes; he becomes the boy who just wants to love her. And love each other they do.

READ NEXT: The Best Romance Movies For Guys