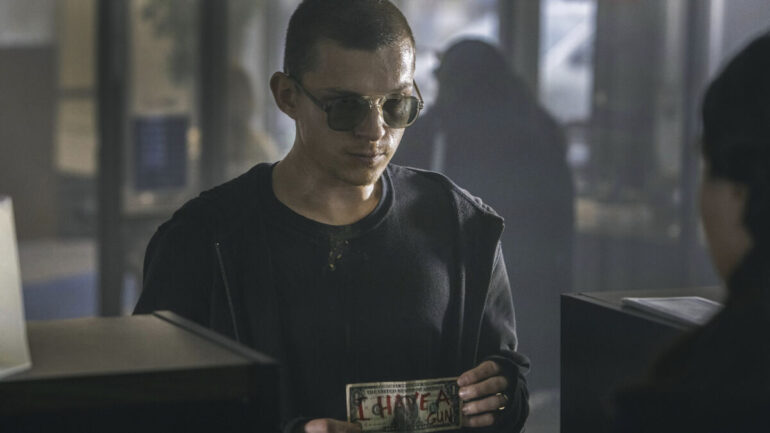 EXCLUSIVE: Your first look at Tom Holland in Cherry, based on the 2018 novel about an Army veteran who resorts to bank robbing to fuel his opioid addiction—the first film directed by the Russo brothers since the Avengers. https://t.co/orbJ1BRDsL

Joe and Anthony Russo, the directors of Avengers: Infinity War and Endgame, are re-teaming with Holland for this film. Cherry is based on the novel by Nico Walker, and from a script penned by Angela Russo-Otsot and Jessica Goldberg. The story follows Holland’s character, as he signs up to be an army medic in Iraq, suffering PTSD as a result of that, and then turning to drugs and a life of crime in order to deal with his PTSD.

Anthony Russo described the film “as an epic film” while also being “a person’s life journey”. Joe Russo elaborated on the film being told in six chapters, and how the visuals and direction will reflect those different time periods of Holland’s character.

Holland surprised us all with his performance in The Devil All the Time, delivering a mature and grounded performance, and it looks like he is hoping to maintain the momentum with his choice to be in a film like Cherry. After being in a superhero film, and playing a character like Spider-Man, it is easy to become type-casted after that, or be unable to overrun the mantle. If we just look at Daniel Radcliffe, who has done tons of movies and played a variety of roles since Harry Potter, no matter what, he is still viewed as Harry Potter. Let’s hope Holland is able to circumvent that.