DC is marking this month with a lot of important anniversaries. 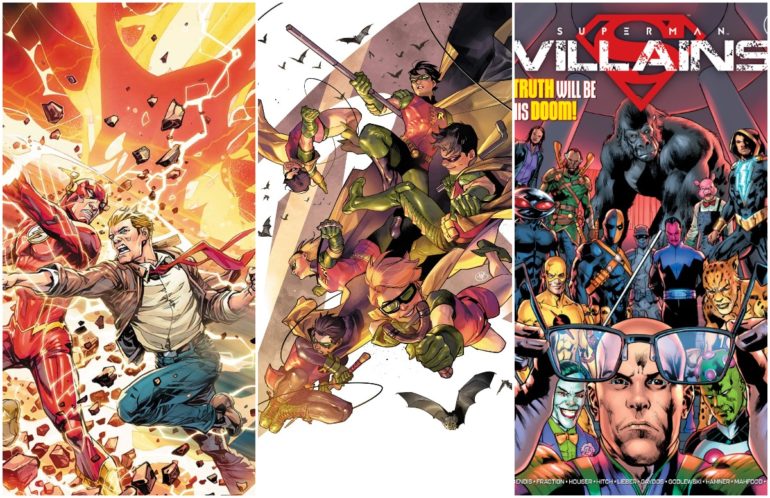 This upcoming March for DC Comics will be a huge month with a couple of important anniversaries and landmarks. Two of the biggest DC legacy characters are given the red carpet treatment with a supersize issue celebrating them both. On top of that, there’s some new beginnings of stories that could be talked about for ages. So here at Cultured Vultures, we’re here to give you the top five DC Comics issues that you should pick up for March.

The fastest man alive is having his significant milestone celebrated with the #750 coming out this month. The issue will focus on the past, present, and future of The Flash. There’ll be several mini-stories about the different eras of The Flash, like the wacky silver age, which saw the hero in some pretty out-there situations like having The Flash having a giant head. The other mini-stories will focus on all the people who took on the hero’s mantle like Jay Garrick, Barry Allen, Wally West, Bart Allen, and more.

It’ll be exciting for writers like Geoff Johns or Marv Wolfman (who delivered the best Flash moment with the death of Barry Allen in Crisis of Infinite Earths) to write the Flash again. The rest of the issue will set up the new arc, “The Flash Age,” that’s been building up since the end of Flash War during Issue 50. Any fan of The Flash needs to pick up this remarkable story.

The duo of Tom King and Mitch Gerads made one of the best comics of all time last decade with Mister Miracle. They took a character that isn’t well known and turned him into an icon that readers still talk about. It looks like the magic of Mister Miracle will be present with their new story, Strange Adventures. The story will focus on Adam Strange who’s a successful and popular soldier that defended his adopted planet of Rann to victory. Adam and his wife retire to Earth, but his past comes back to haunt him as decisions from his time as a soldier threaten the DC Universe.

When Superman revealed to the world last December that his secret identity was, Clark Kent, it sent some huge shockwaves throughout the DC Universe. In Superman: Heroes, we got to see the other heroes’ reactions to the revelation like Batman, Wonder Woman, and Booster Gold. Now we’re getting the reversal with Superman villains reacting to the big news. It’s going to be very interesting to see what they’re going to do with the news as it’ll be amusing and terrifying. With antagonists like Mongul and The Joker, Superman’s personal life just got a lot more complicated. Also, to read about his greatest nemesis, Lex Luthor, take on the news will be fascinating to behold. It’s the perfect companion to Superman: Heroes, as we see Superman’s decision bring consequences.

Robin is perhaps one of DC Comics most essential characters in terms of publication. He was brought in originally as the Watson to Batman’s Sherlock, and the readers loved him. He brought in a younger audience as they’ll have someone to relate to him while reading Batman. What started with Dick Grayson has spawned into multiple characters having fantastic runs as Robin. To have this celebration of such a prominent figure that means so much to readers is a real treat. We’ll be treated to several mini-stories that explore each one of the different Robins throughout the era. Even Stephanie Brown and Carrie Kelly will get their due as their rebelliousness will get the spotlight. This spectacular will show why the mantle of Robin is one of DC Comics most exceptional legacy.

Season 2 of Green Lantern is off to a great start with Hal Jordan being stationed on his home planet, Earth. To see Hal Jordan (literally) down to Earth, and see how he’ll cope with that will be interesting to read about. Since this run is styled like a season of television, this feels like the episode where there are still some elements that need development, which isn’t a bad thing. It helps to develop the story and lore while teasing the big story threads down the line. Also, Liam Sharp’s art style is absolutely stunning to look at, especially when it goes cosmic.