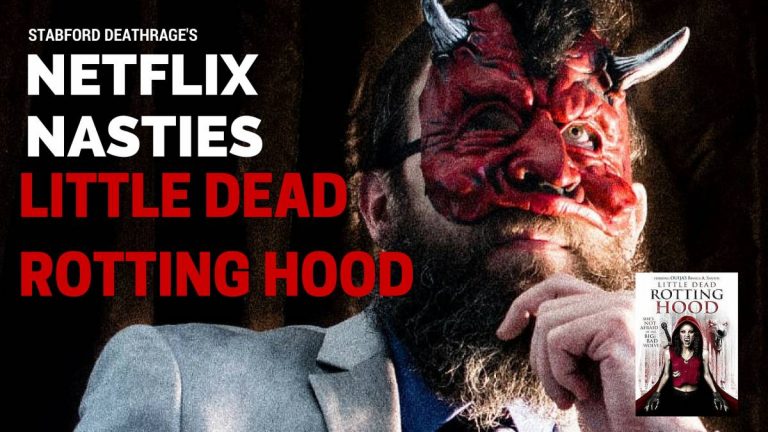 NOTE: We did have a video for this, but then YouTube removed it. Why? Who knows. Because they’re buttholes? Let’s go with that.

It's the video YouTube don't want you to see (for reasons they didn't disclose before removing it): Stabford Deathrage takes on Little Dead Rotting Hood.

The fairytale of Little Red Riding Hood is given the Asylum treatment in this dreadful horror film.

A wolf attack ruins a douchey party of 30-year old teenagers on a pier where one of those Burning Man Flame-Twirlers is considered entertainment.

The cops investigate, and they form an angry coot-filled mob to hunt for wolves. When a crazy coot carrying a flame-thrower joins the hunting party, the deputy says, ‘We’re not storming the beaches at Normandy’. I’m not sure why. Did the soldiers who stormed the beaches at Normandy carry flame-throwers? Again, I’m not sure. Maybe we should check Wikipedia, or maybe we shouldn’t. Then a hunting party member named Cletus gets eaten. The deputy says, ‘Crexy’, which apparently is an unfortunate portmanteau of ‘sexy’ and ‘creepy’.

The sheriff buys 30 lbs of meat from the silver train-car diner that’s featured in every Asylum movie, but I think he meant a slab of ribs, which he dangles from a tree as wolf bait.

Suddenly, there’s an unconvincing werewolf transformation scene, a less-than-thrilling fight scene, and the neighborhood SWAT team shows up. Someone digs in 1″ of the soil of a fresh grave, finding an important-to-the-plot cape and sword, which I’m nearly certain wasn’t in the original fairy tale.

The sheriff gets involved in some family strife, where his wife dumps his kids on him so they’re conveniently in danger.