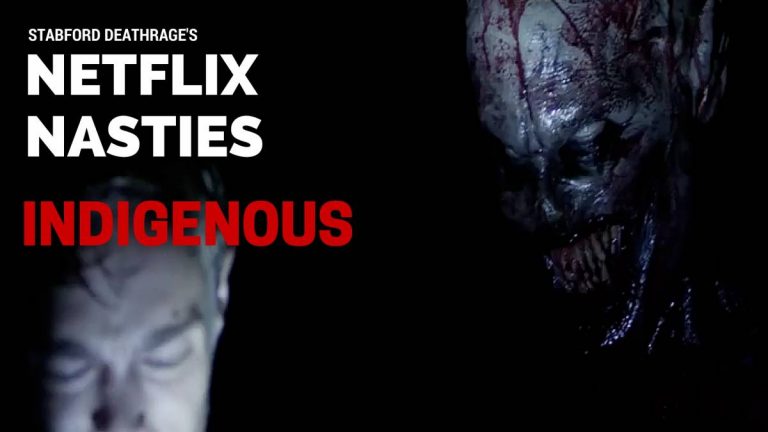 A fun-loving group of American tourists vacationing in Panama indulges in obligatory music montages, slo-mo party sequences, and inexplicable shower scenes, because the script appears to have been written on a cocktail napkin.

Tiring of dancing, tequila shots, and adulting, the main character searches the internet for ‘local activities in Panama’, and he stumbles upon ominous stories about a dangerous area of jungle where teenagers routinely go missing, which incredulously piques his interest because of course it does.

After a segue into a brief, gauzy and totally unnecessary love scene, the group decides endangering themselves sounds like fun, even though they just viewed night-vision shaky cam footage of people being attacked by a wild, barely-visible creature in the very spot they plan on partying.

Then everyone goes surfing.

After journeying to the isolated spot which has some unsurprisingly necessary-to-the-plot intermittent cellphone coverage, they walk through the jungle and swim at a picturesque waterfall. Someone goes missing, darkness falls, and that means more walking through the jungle, only this time with flashlights.

Suddenly, someone spots a creature lurking in the foliage, then it’s time for running through the jungle with flashlights.

They get separated in the dark forbidding jungle, and then there’s more flashlights, running, and screaming.

Someone discovers a cave filled with bats and decomposing corpses, and the gooey, toothy creature
squats there gnawing on some leftover tourist remains. If this particular location in Panama
is so remote and dangerous, why are there so many tourist bones in the cave?

Only the art director knows for sure.

Thankfully, one of the character’s beta-tested facial recognition software causes their Youtube distress video to go viral because of course it does. Helicopters swarm over the area, and one of the tourists
gets attacked by a chupacabra on live TV in a LOL-worthy moment which culminates in an unintentionally hilarious tourist-slash-chupacabra tug-of-war.

Featuring board shorts, bikinis, and abundant flashlights, Indigenous’ wafer-thin plot is fleshed out by flesh.

Don’t get too excited, as it’s only the slightly naughty type that’s commonly found on Abercrombie and Fitch shopping bags, and it’s briefly exploited near exotic, tropical locales and devoured in dimly lit caves.

Indigenous disposable, uninteresting characters are the kind commonly found clutching a tropical beverage and raucously woo-hoo-ing near a palm-frond covered cabana, and they’re so interchangeable they couldn’t be picked out in a Hollister ad.

The somewhat opaque, butterfly-tongued monster is slightly interesting, but seldom seen, which is probably for the best.

Much like a chupacabra-fraught rain forest, I would avoid Indigenous.