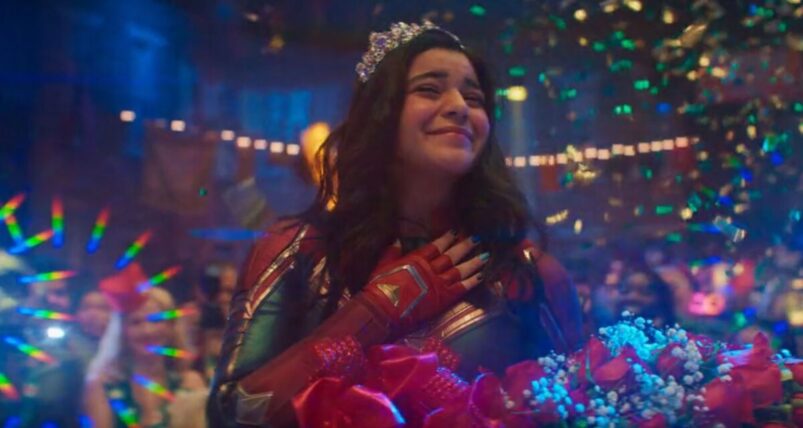 Our first look at Kamala Khan – the soon-to-be Ms. Marvel – is her narrating her fan podcast, recounting the Battle of Earth from Avengers: Endgame. Her slightly revisionist history, portraying Captain Marvel as the ultimate saviour of the battle, is likely to annoy a lot of fans right off the bat, as both Captain Marvel and Brie Larson proved somewhat divisive. But it sets her up as a fangirl of the Avengers, and more importantly of Captain Marvel.

Kamala’s family are introduced and shown to be devout Muslims, with Kamala’s brother hilariously praying every moment he gets. Muneeba Khan, Kamala’s mum, is shown to over-protective, not allowing Kamala to do anything a non-Muslim teen would. Kamala is sent off to school, where again she is berated, this time for having an overactive imagination, and having her head stuck in the clouds. She instantly is called into the headteacher’s office for this. It’s in this incredibly awkward scene the audience is introduced to the headteacher. Hopefully he isn’t a mainstay, because his over the top camp is irritating. However, some of that is intentional, getting the audience to side with Kamala for her imagination.

‘Generation Why’ further explores Kamala’s relationship with her family when she begs them to take her to AvengersCon, this time putting the spotlight on the relationship with her brother. This is shown to be true to the brotherly love felt between many people, playful, full of insults, but when it matters the other will pull through. In Kamala’s case, her brother does convince her Muneeba to let her go to AvengersCon, but on her terms. This means going as the Incredible Hulk with her dad, something that Kamala vehemently rejects. Her parents try to reach out, showing some understanding of her obsession with superheroes, but fail to understand it properly, indicating room for growth in future episodes.

‘Generation Why’ shows us how this weighs on Kamala in a heartfelt rooftop scene with her and her best friend Bruno. No doubt many fans will say they’re lovers or they should be, but it’s clear they’re just platonic friends, as there is no flirty dialogue or longing looks at one another. It calls out that there are very few heroes like Kamala, hinting at the lack of diversity within the Avengers. The show doesn’t dwell on this for any longer than it needs to, and provides enough for the audience to go on without feeling forced or pandering. Hopefully following episodes have similar restraint, though it is a fine line to walk.

As far as comic conventions go, AvengersCon is extremely disappointing. Its location is brilliant – Camp Lehigh, honouring Captain America – but it isn’t swarming with the amount of people that you’d expect, especially given the amount of debt people feel toward the Avengers. There is a notable lack of cameos from anyone as well, missing a key component of any comic-con: the celebrities. Of course, if there were any actual superheroes there, the situation would have unfolded differently, but the lack of an in-universe explanation for their absence is disappointing.

However the con does serve several purposes within ‘Generation Why’, most obviously showing off Kamala’s nerdiness and introducing her powers. With her forgetting her gloves due to nerves (anyone would), she has to show her Captain Marvel cosplay missing a key component. Fortunately for her, the bracelet she has remedies this issue, by allowing Kamala to shoot what looks like goop out of her hands. Another power this scene demonstrates is stretching her body like Reed Richards. Though due to the stress of the situation, a full run down of her powers isn’t given. Next episode is bound to explore this further.

When Kamala gets back, she finds her mum waiting for her, chastising her for leaving. This scene has a much slower pace, and allows a better focus on the two characters. Zenobia Shroff, who plays Muneeba, gives an emotional performance here, upset that her daughter would sneak out on her. Kamala’s grandma is brought up again, paying off the scene where Kamala and Muneeba get her junk. While it’s not said explicitly, it’s clear that Muneeba disapproves of her mum, with her attachment to material possessions and lack of real world focus. Iman Vellani mostly reacts in this scene, however at the end she gives a playful grin of someone who is still going to ignore their mother. Hopefully future episodes keep their focus on this relationship, as it allows for smaller stakes, which in these smaller scale projects works all the better.

At the end of ‘Generation Why’, we get a cryptic look at the villains. A group of office workers reviewing the footage of Ms. Marvel using her powers at AvengersCon, working out what is happening. There is nothing identifiable about who these people are or what their organisation is, other than “boring people in suits stopping the kids having fun”. Marvel would have been better off leaving this tease out, as it doesn’t give enough information to be ominous, and it doesn’t fit with the focused character study that the main show presents.

The show is off to a bright start, rightly honing its focus on Kamala and her family. Throwing in the villains at the end is unneeded, and draws too much attention away from this. This show will work better if it keeps its focus on the family drama that comes with not only being a superhero, but wanting to live a life without constant parental oversight. 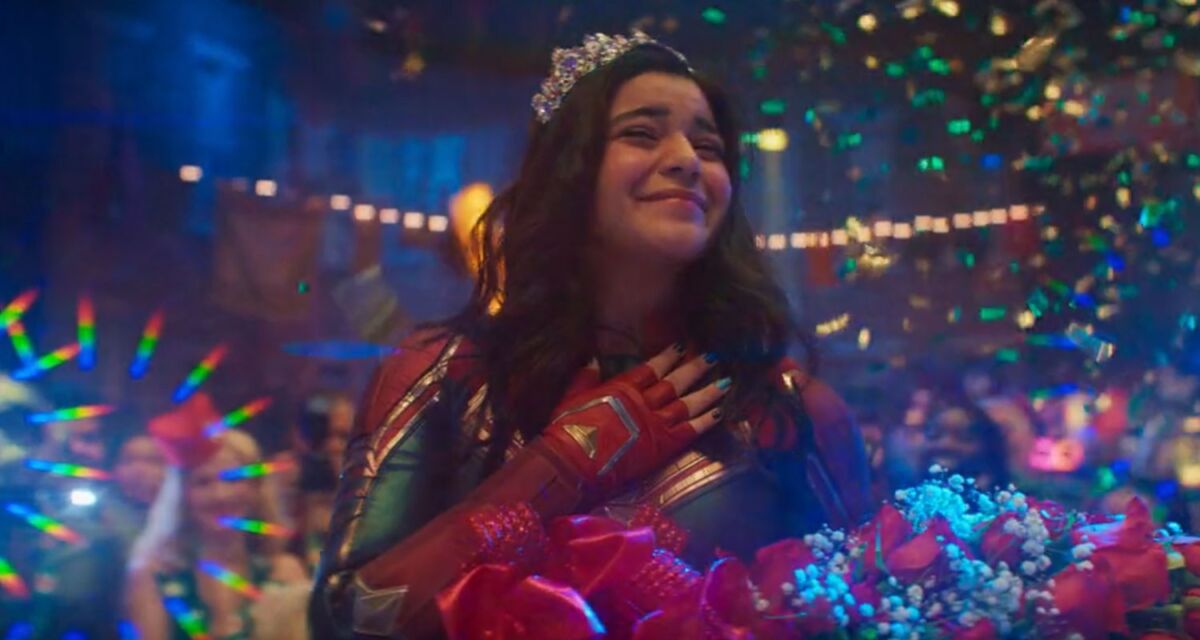 Verdict
'Generation Why' provides a bright start for Kamala’s tenure in the MCU, focusing on who she is without the powers. While the post credits scene is entirely unnecessary, adding nothing memorable, it sets up the inclusion of the villains next week.
8
Cultured Vultures is a pop culture website established in 2013 covering all things gaming, movies, and more. We eat your words.
All The News On The Biggest Games