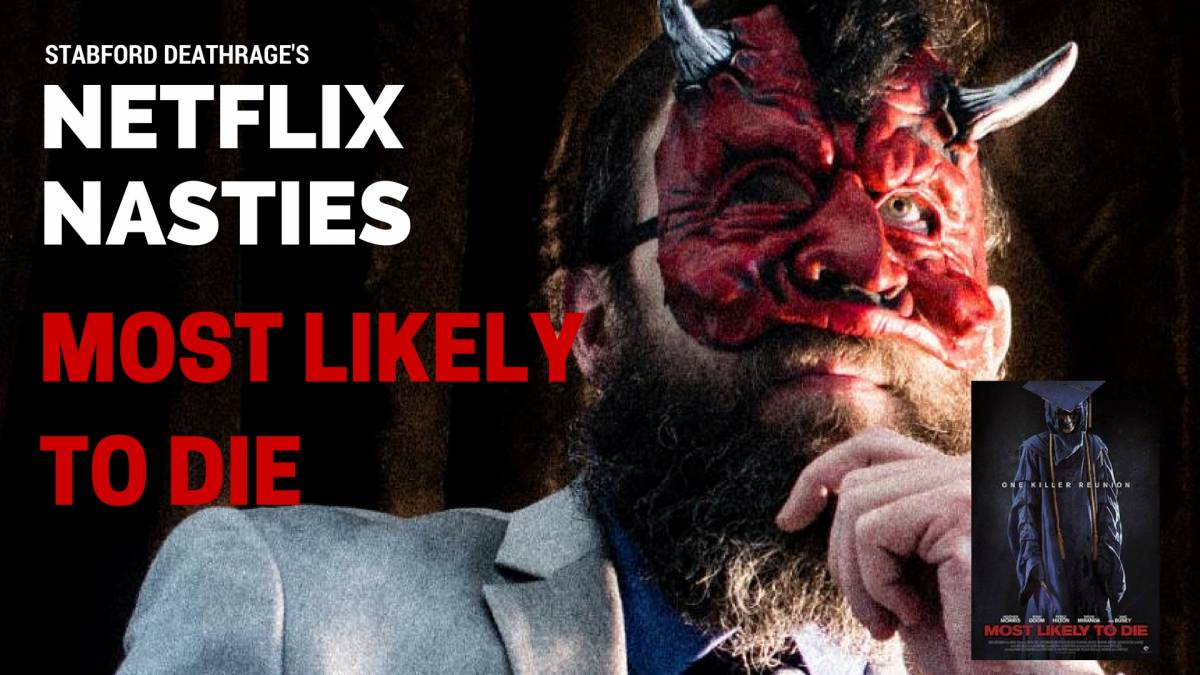 Alumni gather at a friend’s house for their 10-year reunion when they’re stalked by a masked figure in this boring horror film.

Most Likely to Die opens with a young woman who says, says, ‘I feel so old’ while driving her convertible sports car, and I wouldn’t blame you if you wanted to hurl a brick at your TV, because I’m glad there isn’t one handy myself. Her name is Ashley, and the reason we know this is because it’s written on her crop-top.

After stripping, she gets dressed in a graduation cap and gown because it’s in the script. She suddenly finds photos of her former classmates hanging suspiciously on the wall, and even she finds that to be weird and obvious. She plays a game of Hot Or Cold, which definitely left me cold. When she returns, someone has spray painted a large black X over her picture on the wall. She steps on a trap and is dragged by a rope into a small, creepy outbuilding and killed. The credits roll, then Jake Busey appears.

I know what you’re thinking. If Jake Busey is in the movie, he did it, whatever it is.

After more elaborate plans and traps, it’s revealed someone’s face has been defaced in their yearbook which sets up the backstory of why all this tedious revenge is happening. It’s not very interesting. Then everyone has a food fight, which tries to make the characters appear fun. It’s doesn’t work. Catty, gossipy, and boring plot developments occur. Of course, there’s no cell reception, and of course, Busey lurks.

Suddenly, Busey is killed. I know what you’re thinking, even though he appears to be dead, Busey did it.

After a million years of movie, the survivors finally discover Ashley’s body, and Perez Hilton shrieks like a 3-year old child. Did I mention Perez Hilton is in this film? He is, and I’m sorry. You can take that any way you’d like.

Suddenly, everyone’s a suspect but no one is interesting.

The killer wears a papier-mâché mask that looks like the defaced yearbook photo, and he picks off characters one by one. After finding blood in a soap dispenser, the surviving characters turn on one another. The killer kills people with a sharp graduation cap, and he seems to have a problem with necks, but that’s never really explained.

Suddenly, just when you think this movie couldn’t get any sudsier, the film ends several times unsatisfactorily.

Most Likely To Die is a horror/thriller lacking horror and thrills. It’s exactly like you’re trapped in a high school reunion with the bullying, gossiping kids, and they’re just as boring as you remember, and there isn’t enough booze in the world to make them interesting, and you pray for the sweet release of being murdered by the tortured loner no one remembers so you can escape the bullying and gossip, because that’s the only thing that could possibly liven up this dreadful party. You can take this advice of leave it, but if you’re ever invited to a high school reunion at someone’s isolated mansion with Perez Hilton and Jake Busey, maybe you should be unavailable that weekend.