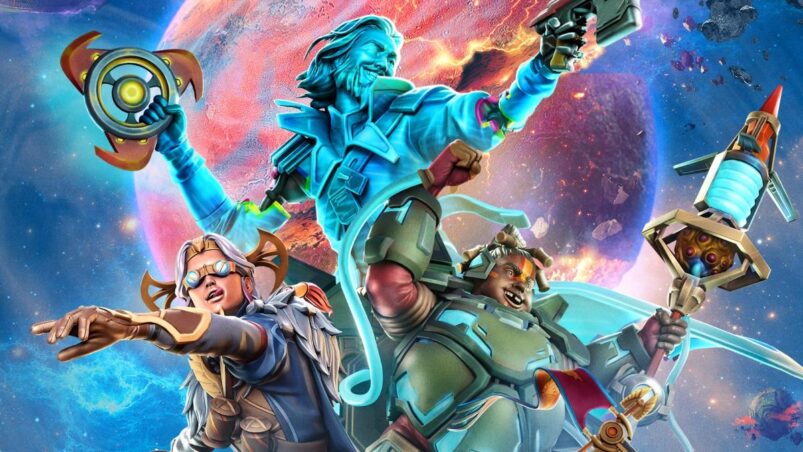 Collectible card games, or CCGs for short, are some of the most popular strategy subgenres, with thousands of players logging in daily to experience rock-solid competitive strategic and tactical gameplay. On the other side of the fence, tabletop miniatures games are popular with avid and veteran hobbyists due to the freedom to create, paint, and bring to life your own armies. CCGs and miniatures games seem like a perfect match as both tap into the desire to complete your collection, as well as the personal touch, and Moonbreaker makes the most convincing case so far for pairing these two design systems.

Unknown Worlds Entertainment’s Moonbreaker can be classified as a collectible miniatures game where you compose your own squads of captains and squaddies, and battle with other players in fast-paced turn-based competitive matches. The game’s set in an original sci-fi universe born from the mind of famed writer, Brandon Sanderson.

The first and most obvious advantage playing in Moonbreaker’s favor is its extensive in-game miniature painting system with quite the impressive suite of customization options, as if a hobbyist’s toolkit has been lifted straight out of their workshop. It’s safe to say that Moonbreaker will easily fulfill the desire of any budding painters and miniature enthusiasts to have their armies bear the marks of their craft. The game also has the advantage of beating Games Workshop, the juggernaut of tabletop miniature wargaming, to the punch of bringing a robust and effectively-implemented painting system to digital.

Gameplay-wise, Moonbreaker taps into the best that CCGs and miniatures games have to offer thanks to an engaging battle system. The overall flow and dynamics of the core battle design relying on a mana-type resource called Cinder for unit placement and abilities, as well as a form of hand management will be immediately familiar and gripping to many gamers with at least some experience in other card games.

But what makes Moonbreaker truly intriguing is that it takes inspiration from Counterplay Games’ now-defunct Duelyst and looks to perfect the formula of having cards transform into individual units that can move and act across a hand-crafted battlefield. Instead of Duelyst’s somewhat limited chess-like grid, players will have complete control and freedom over the position and movement of each unit, so that players can maximize their tactical precision down to the smallest pixel. Not only is this approach a great twist to the tried-and-true core CCG tactical combat design, but seeing your cards turned into actual 3D miniatures on a battlefield with their own dynamic and vibrant animations makes the tactical experience wholly exciting and engaging.

In its current state, Moonbreaker does have a few kinks and rough edges that need to be worked on and smoothed out to really drive its high potential home. The first of these issues comes from the miniatures-game-inspired combat where you’ll have pixel-perfect control over your units.

Terrain nooks, crannies, and corners will often create annoying and frustrating interactions with either unit positioning or ability triggers that the game doesn’t make clear enough for you to work around. For example, even the tiniest jutting out corner can block the successful activation of a grappling hook ability designed to pull an enemy towards you, even though you think that there’s enough distance between the unit you’re targeting and the blocking corner. It’s these tiny oddities that can lead to plenty of confusion and strategy-breaking situations.

Also, Moonbreaker isn’t the most technically polished game at the moment. Sometimes your keyboard camera controls may simply stop working and abilities can activate in the wrong place without your input or confirmation. The former isn’t as egregious for an as yet unreleased game, but the latter situation can basically lead you to lose matches unfairly because the game decided to trigger a targeted ability before you could find the right position.

In addition, just like any card, or collectible game for that matter, there are definitely some balancing issues, where certain units are overwhelmingly better than the rest in competitive matches. This simply makes the roster of minis feel small and limited and in desperate need of more content and tweaking.

Finally, the graphical style, while distinct, is a bit of a mixed bag. In combat, due to the color schemes and particularly aesthetic approach, there’s this washed-out look with many graphical elements of terrain and units clashing making it an unnecessary challenge to read the board at-a-glance.

All these issues aside, Moonbreaker is definitely looking like an engaging game with a unique mesh of CCG game design combined with miniatures game precision, control, and flexibility. While the extensive miniature painting system is quite impressive, its combination of gameplay systems gives the game a unique position in the market. It may be lacking in content, suffering from some technical hiccups, and the progression system is yet to be implemented, but Moonbreaker shows a creative approach to game design and is absolutely a game to watch closely.