Taking up the hunt on PC? Here's the lowdown. 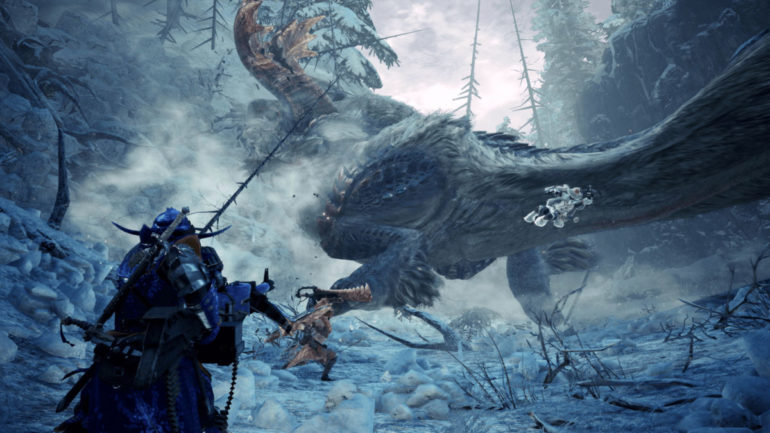 PC players will be able to brave the sub-zero climate of Monster Hunter: World’s expansion on January 9th, and Capcom’s monster-sized game will enjoy new areas, monsters and quests to offer aspiring hunters willing to brave the frigid land.

Monster Hunter: World is not a game that relinquishes its secrets easily, though. Failing to prepare is preparing to fail in the New World, and just like the first time you stepped into the Ancient Forest, you’ll need to ensure you’re prepared for the challenges that lie in wait in the expansion.

Get yourself some Defender equipment
If you’ve not played for a while, you may notice that you’re able to access armour and weapons from the recently introduced Defender range of equipment. This is Capcom’s way of providing players with an easy route through Monster Hunter: World’s base game content.

Across the board, the Defender set has great stats and a low cost for creating and upgrading equipment. This will ensure you’re quickly geared up for Iceborne’s initial content.
This is particularly useful for new players or players who may have fallen behind halfway through the game’s core gameplay experience. It’s the perfect opportunity to test out different weapons and playstyles and find something that feels good for you.

Complete the story
The reason the Defender set exists is because you’ll need to complete the base game in order to be eligible to play through Iceborne.
This is no small feat, with an average playthrough taking up to anything between 30 to 50 hours of gameplay as the game introduces every type of monster in the New World.

There’s no quick way around this. You’ll have to complete the story first, and you can’t be carried through by good equipment alone: missing a few attacks will render novice hunters quickly overrun, knocked out and sent away with their tails between their legs. You’ll need to learn how monsters behave, what equipment is most useful for your playstyle, and how the world interacts with your character.

SOS!
A tip for new players: SOS Flares allow other players to jump in and give you a hand with a troublesome beast, at a cost of making whatever monster you’re facing more difficult to accommodate a multiplayer session.

If you’re really struggling with a monster, open up your game for other hunters to help out. Often, the challenge is finding a monster’s weakness or bringing a key item that will turn the tables in your favour. Allowing other players to help you out will give you some breathing room, and if nothing else will distract the angry dinosaurs charging fang-first for you.

Remember that everyone shares the same faint limit. If your group exceeds the amount of times you’re allowed to get knocked out, you all fail – so you’ll still need to be on your toes.

Get your mantles, ingredients and gadgets
Spend as much time as you can with adding to your mantle, ingredient and Palico gadget collection. Specifically, keep an eye out for the Iceproof Mantle to help against all of the ice damage you’ll face up against, Ingredients are needed to ensure you gain sufficient stat boosts when eating before a hunt (which is always something you should do). Palico gadgets are useful ways of allowing your feline partner to help you out – whether that is through the use of deployable healing items or other support options.

Stock up on monster and item crafting materials
Always make sure your base has something going on when you’re out on a hunt. Keep cultivating bugs or plants you need – honey, for example, will ensure you won’t run out of mega potions as quickly – and ensure you’re checking in with the Argosy captain and the Tailrider Safari for easy ways to gain extra items.

Keep as many materials as you can. Iceborne weapons and armour may require you to make use of the lower-tier stuff.

Use the Bandit Mantle
If you’re taking on the core content before Iceborne, combine the Bandit Mantle with a fast weapon for an easy way to earn extra money during a fight. The mantle allows you to gain trade-in items that are used for selling.

This all makes a difference when you need to pay for upgrades, specific items, food, Palico gear, weapons and charms later on.

Pack the essentials
Iceborne is the next step up from Monster Hunter: World’s endgame. It’s not going to be easy.

Ensure your storage chest is full of Max Potions, Ancient Potions and Mega Potions for healing. I favoured crafting a lot of Flash Pods for an easy way to get a bunch of hits in, or for grounding flying monsters. Keep a surplus of traps for when you need to ensnare a monster rather than kill it outright, and always ensure you have some Antidotes to hand for when you run into poison damage. Ranged weapon users need to also take ammo stock into account.

If you run low, you’ll either need to grind some more or buy up some stock.

Get to know your clutch claw and weapon(s)
Iceborne adds new combos to weapons and an ability to add charms to them, as well.

Ensure that you’re not missing out on stats to fill by popping a charm of your choice into your preferred weapon when the expansion hits. You’ll also need to ensure you master the new clutch claw item, which makes grappling onto monsters easier. Attacking monsters while mounted enables you to create a hidden temporary weak spot for other hunters to exploit – perfect for carving off tails or cracking monster heads.

It’s a matter of timing – grab on as a monster is about to make a swing for something, and you’ll be immediately knocked off.

Take your time
It’s tempting to try and rush content, but this is a game where going at your own pace is perfectly acceptable. If you’ve hit a wall, take a break and grind out some lower-rank missions. Add some extra items or armour to your kit for the next time you face off against the likes of Tigrex or Beotodus.

Monster Hunter World: Iceborne is out now on PS4 and Xbox One, January 9th for Steam.