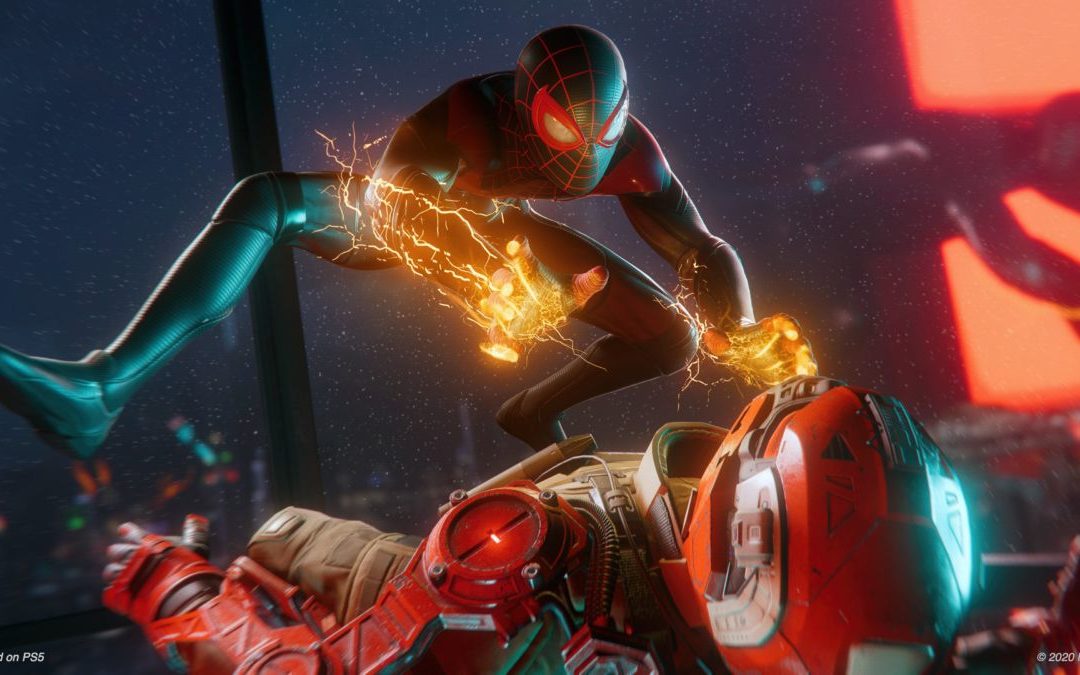 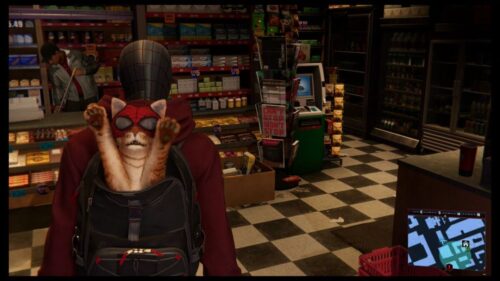 Minor spoilers to follow for Marvel’s Spider-Man: Miles Morales, so you’ve been warned. We’ve even broken out the spoiler cat, so you know we’re serious.

Thwip! The sound of the web-line shooting into place as I start my swing through the city is all I need to be right back in the groove. I’m in New York again, fighting crime, helping the people as Spider-Man. The name is a bit more confusing this time around, being that there are two. I’m not the same hero I was in 2018’s epic adventure, but it won’t take long before people know I’m different, and they may not know the name of this new Spider-Man, but we do: Miles Morales.

This story takes place after the events of the first Spider-Man game from Insomniac, when Miles has been trained by Peter and is helping him do superhero things that tie back to the events of the previous adventure. During all of this, our protagonist discovers new abilities he has and how his powers may not be the same as the original Spider-Man. There is also a lot going on with his mother’s campaign to be a councilwoman, old friends returning, and ostracized family members. These two sides of the young hero’s life come crashing together quickly in a high-stakes tale of greed and revenge that could cost Harlem dearly.

It’s exciting, well-crafted, and personal. Sadly, it does feel like the side story in between 2018’s Spider-Man game and the inevitable true sequel — seriously, stay after the credits for that tease — but as long as Miles is a part of the future stories, I’m fine with this episode feeling more self-contained.

Not only does the game use the same engine as the first, with a few spectacular enhancements, it also follows the formula that made the previous one a success. This isn’t just with the gameplay, but its story structure as well. Peter and Miles deal with similar threats, have friends become enemies, juggle their secret identities, experience love and loss, and help the community. The various parts all cumulate in a strong narrative that makes players feel for the characters. Fans of the first one will notice these similarities, but see Marvel’s streets of New York through a distinct set of eyes. Miles is a different character, still discovering himself and gaining the confidence to call himself Spider-Man, while fully existing in a world with that version of Peter Parker and his foes.

The city you web-swing through and battle henchmen in is still one of the highlights of the experience. The sights and sounds feel more vibrant this time, with the warring groups sporting red and an overpowering purple, while the streets themselves burst with colored walls, lights, flags, and culture. Characters are diverse and major players splash their own color and personality on the screen — with a big shout-out to Prowler for stylishness — and Miles’ new abilities generating some real electricity. It’s a splash of new hues and power that look crisp in his scenes. The music is a nice touch, with Miles having an affinity for beats—even working on one throughout the game — and blasting some sensational tunes in certain spots. It was fun seeing him put his own spin on being Spider-Man and the influence of his music comes across as important.

It’s a smaller, more compact story, so it makes sense to bring the scale down a bit while not taking away any of the freedom in the open world. Although the map is (mostly) the same, Harlem is Miles’ home and plays a bigger role in the story. Having only been to the real place a couple of times myself, seeing everything breathe made me want to return. The story setting feels warmer due to the holidays going on, but everything is cold and snowy as we explore the city. That’s my only real complaint, I hate snow and it visually hampers me with everything looking white. However, the addition of snow makes the city feel different from last time, with that particular aspect of the setting helping to solidify that Miles is alone in this while Peter is gone.

The new gameplay features are well-integrated and don’t detract from the previous entry. Combat is still buttery and interactions with objects and the environment are easy. Playing as Miles does feel a bit different, though. The normal amount of gadgets is cut down with less crowd-control features, while more strategic and helpful tech supplies this Spider-Man with a versatile arsenal. Landmines can be used to take out multiple targets, but only in certain environments, and gravity wells return to keep villains off their feet, but the biggest change is the holograms that fight alongside you instead of Peter’s tiny drones. Miles has his own set of powers as well with the Venom abilities that stun, de-power, and provide more area effects in combat. He can also learn to vanish at any point during a fight, which completely changes how some encounters can work. New upgrade trees may seem smaller, but they are certainly helpful in boosting existing abilities and granting a few more options when in a tight pinch.

With the new tweaks to the engine, all of the color and textures, as well as the numerous enemies on screen and effects for the various abilities, I’m not surprised that the game caused my PS4 to slow and chug at a few points. There were also a couple of moments where pop-ins occurred and some assets didn’t materialize coming out of cutscenes, but these were all small things. The only big bug I encountered, like many others, was replaying a mission and then coming back to my present save as Miles, unable to use any of my spider-powers or even web-swing, save for turning invisible. This is near game-breaking as it seems the only way I could find to fix it was reverting to a previous save, but this does seem like something that could easily be patched. Right now though, it cost me a few hours of gameplay.

Some of these new enhancements that are pushing the engine or the original hardware could be the issue, but I am happy to see that there were more enhancements implemented behind the scenes as well in accessibility. Players have control over several press/hold commands, sizes for various visual elements that pop up on the screen, and there are several small tweaks that will be beneficial to those who want to gear their responses to one sense more than another, like with the vibration feedback. My new favorite things to see are the American Sign Language option and chase assist, which slows enemies down a bit in those classic sequences where Spider-Man is swinging through the city as fast as he can to catch his prey. These portions can be hectic for many, but especially anyone who may lose sight of the target easily or have motor function issues that complicate staying on someone like that. Overall, these were good additions.

There is understandably some concern about the game’s length, but when it is this fun I’m not worried. The main story is easily beatable in two sittings, but I’ve already started my new game plus playthrough with a sense of glee. Like last time, there are costumes and gadgets to unlock, many activities to do for tokens, and a few side missions that are fun, as well as other activities. I miss the science mini-games, but everything in this installment seems just a bit more tweaked to fit Miles. This may feel like more of an expansion than a proper spinoff, but there is enough content to satiate fans of the 2018 game or bring in new players who enjoyed the Into the Spider-Verse movie. Don’t confuse Miles Morales for a sidekick or kid, and don’t pass up on another great adventure.

A code was provided to the writer by PR. 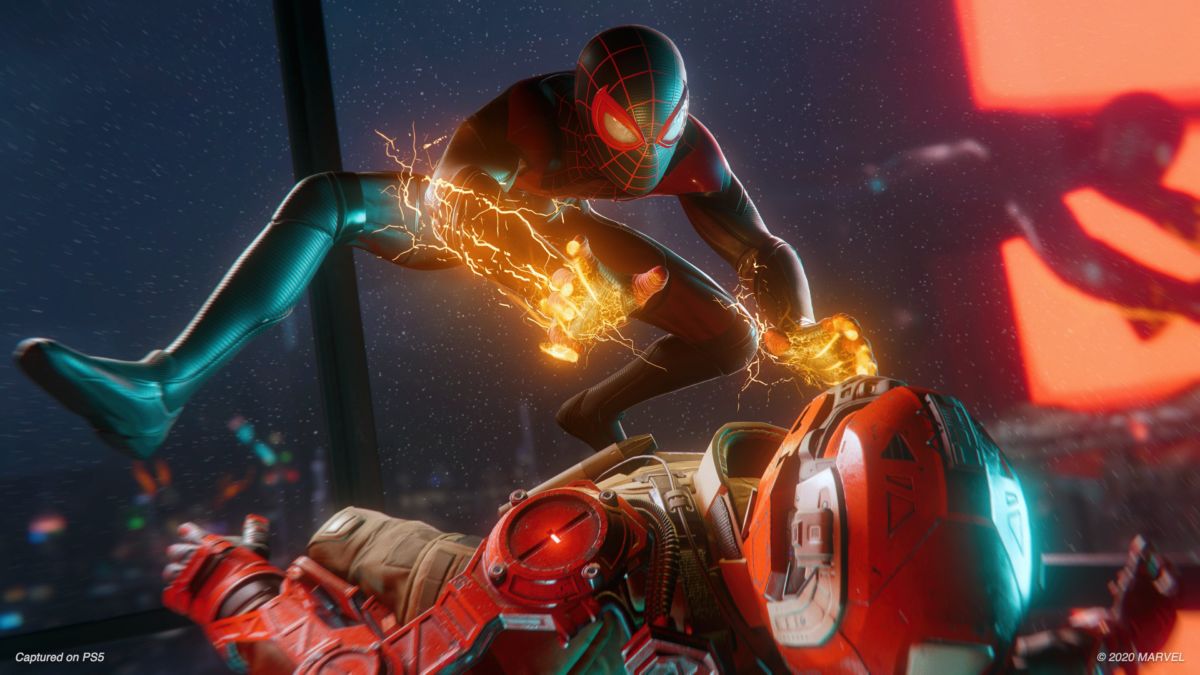 Verdict
There’s a new hero taking up the name Spider-Man with his own style and a brand new set of problems, but Miles Morales' adventure is just as amazing.
9
Cultured Vultures is a pop culture website established in 2013 covering all things gaming, movies, and more. We eat your words.
All The News On The Biggest Games