Roses Are Red, Violets Are Stealing Loose Change from My Pockets While I Sleep by David S. Atkinson REVIEW 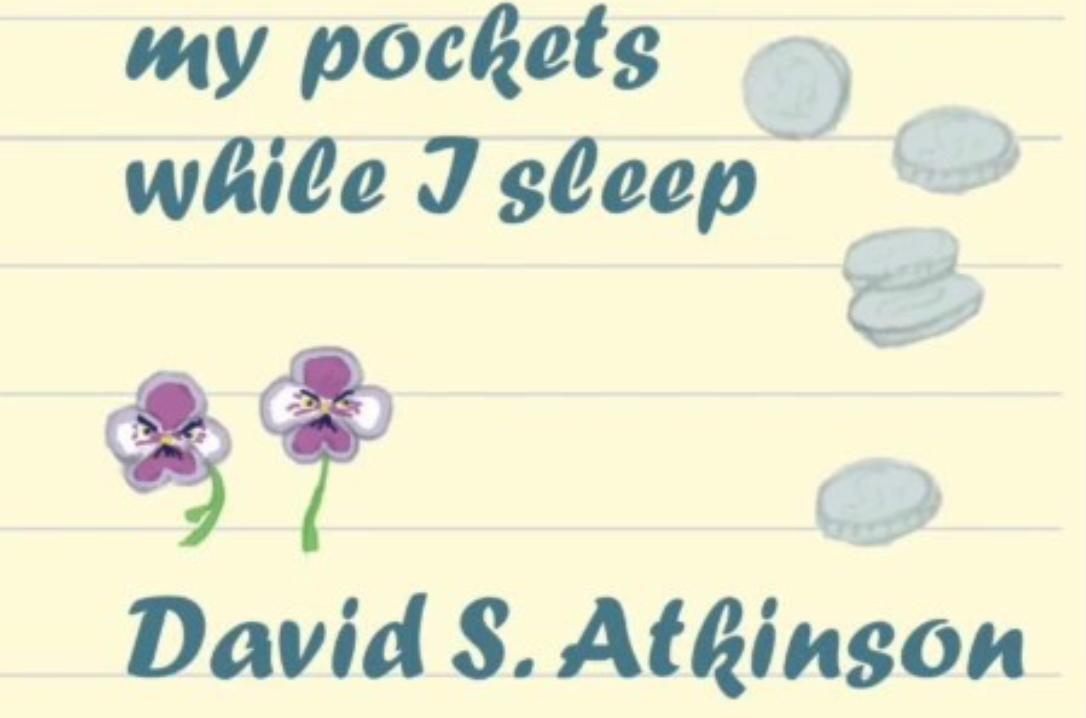 David S. Atkinson’s Roses Are Red, Violets Are Stealing Loose Change from My Pockets While I Sleep is a collection of absurdist flash fiction. Most of the stories aren’t longer than a page and a half. Despite that, all of them have very long titles, often ones that barely relate to the story. At least one has a title longer than the story itself.

Most of the stories are based around over-the-top absurdities treated as mundane and are packed with pop culture references. For example, “They’re Your Fears, They’re Your Terrors and They Live in a Cave in the Pit of Your Psyche and All are Named John Jacob Jingleheimer Schmidt” is about a man who tries to get his girlfriend back after she leaves him for selling her kidneys. He writes a love note to her on the sidewalk in chalk outside her place of work. However, every woman named Sarah who passes by it ends up coming to his apartment, including famous ones like Sarah Silverman. Unable to tell if his actual girlfriend is among the Sarahs, he decides to use them to take over the world.

“It’s funny, but my takeover of the world started when I tried to get my old girlfriend back.”

This story stands out in that, despite the humor in it, there’s also a tinge of melancholy to it and a subtle meaning in it about moving on. Most of the stories are simply ridiculous jokes taken to the nth degree. “Benjamin Franklin was piss on my apartment building door” is about just that. A man goes outside his apartment to find that Benjamin Franklin is pissing on the door and has humorous exchanges with him.

“Then he grabbed me by the shoulders in his majestic turkey waddle hands, dripping second amendments on my good fake tuxedo T-shirt, and leaned in like it was tax time.”

Some of the stories have a postmodern twist to them. This is especially true in “This Story Keeps Using the Name of ‘Achilles, Agony, and Ecstasy in Eight Parts’ as Its Title No matter How Much I Take Away Its Coachella Privileges” where the narrator discusses his problems with the story itself as it refuses to take any other title but one from a Manowar song. He discusses the ways he’s tried to reason with and punish the story to take a different title, but the story refuses to budge.

“I’m not really sure what I should do at this point, short of going to court to have this story ruled ungovernable and sent to juvenile cake-decorator’s prison with Paul Newman.”

This is a big strength with Atkinson’s prose. He has the ability to write in long, borderline non-sequiturs and make them sound entirely natural. Many of the “voices” in the stories are unique and don’t give the impression they all have the same narrator. Some narrators speak in a conversational tone with a lot of slang while others will be more affected. In “I contemplate the humble potato” the narrator does just that, considering his potato in a pompous manner. He grows to fear it after thinking about it.

“I feel sour milk nightmare on my dehydrated, starchy tongue and know the menace hiding below Flagstaff and deep within the antediluvian mud temple of synchronous sin in Idaho.”

I can’t point to any stories in the book that I think are bad. There are a lot here, the book being 250 pages with many stories not even cracking two pages. There are some stories that run together by being too similar, such as there being two stories about geographical locations disappearing. There are others I didn’t dislike but simply found forgettable.

Because of how absurd a lot of these stories are, it’s a lot to take in when read straight through. This is one I’d more recommend keeping around to read one or two when you can spare few minutes. It’s not a fault with the book, in fact, I’d say it speaks to how much Atkinson is able to fit in such small prose pieces. Reading several of these stories at once is both an exhilarating and exhausting experience.

Verdict
Roses Are Red, Violets Are Stealing Loose Change from My Pockets While I Sleep is an entertaining and hilarious collection of totally absurd short fiction. Atkinson shows what the form of flash fiction really is capable of. He fits more substance in one page than many writers can fit in ten. This book will upend many people's expectations of what fiction is supposed to be, but that's all the more reason to recommend it.
9
Cultured Vultures is a pop culture website established in 2013 covering all things gaming, movies, and more. We eat your words.
All The News On The Biggest Games