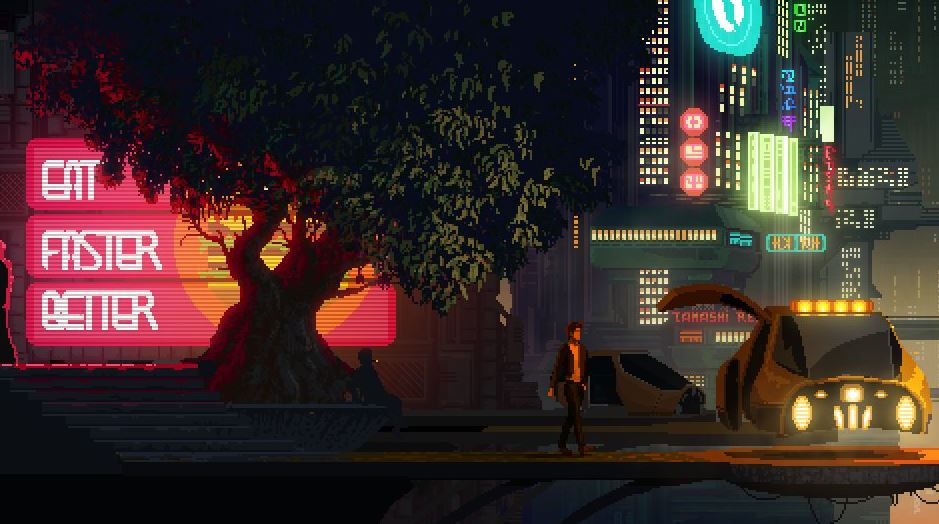 The Last Night, fully revealed at Microsoft’s E3 2017 conference, immediately caught the eye of anyone who likes Blade Runner, or even just anyone who has a working pair of eyes.

Although not a great deal is known about the 2.5D cyberpunk game so far, its distinctive style helped it to trend on Twitter and put it on the map.

Twitter is also where the game has been embroiled in some controversy, particularly because of Tim Soret’s previous comments about progressivism using the GamerGate hashtag three years ago. 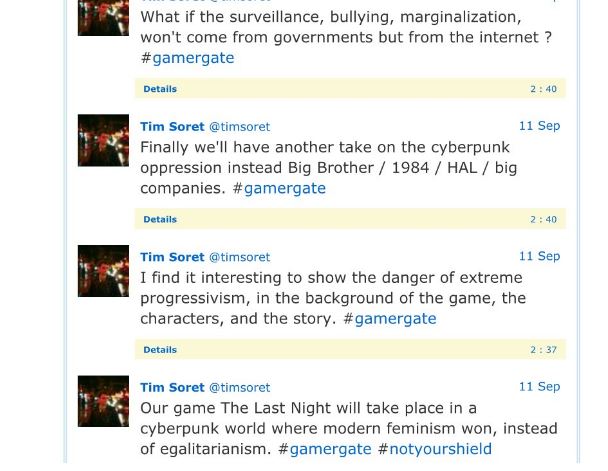 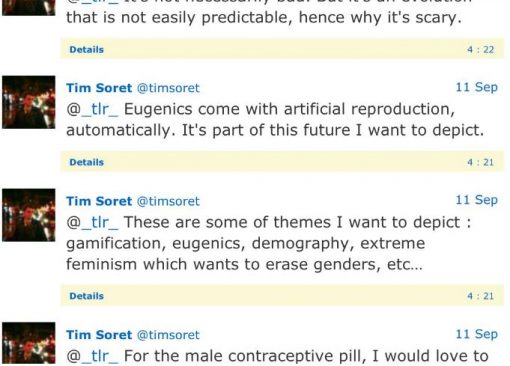 I wonder why all of these SUPER IMPORTANT TO MY PERSONAL VISION THEMES AND IDEAS aren’t in the trailer he’s so proud to show the E3 Press? https://t.co/yMG53lLatl

Dear @Microsoft @Xbox why did you spotlight the game of a sexist who thinks feminism is toxic #XboxE3 #TheLastNight pic.twitter.com/ZLwa53PLDS

Lead dev of The Last Night is so GamerGate that that shits in the game along with Vivian James, GG’s anime waifu mascot. https://t.co/9rYAAgfNSS

Some of Soret’s other tweets have also been highlighted:

Well, there goes my interest in “The Last Night” pic.twitter.com/0hrQECdZV7

dunno if he’s gotten any better but this is the lead dev of the last night pic.twitter.com/SVgBPsggsE

Vivian James is a “mascot” for the GamerGate movement.

These “revelations” have led many gamers and industry people to denounce the game, though there are an equal amount of people who are defending The Last Night and Soret’s previous comments (which may no longer reflect his beliefs):

Just ignore them, Tim. Your game looks great and this garbage will blow over. The product will speak for itself.

Tim, please, don’t waste your precious time and nerve cells on this, do your amazing work! We will support you either way.

Soret’s only acknowledgement of the controversy so far is this tweet:

He has not tweeted since.

If you want my two cents, the game looks good. That’s all I have for you. I have no horse in this race. Anyone now not buying the game will be offset by those who are hearing about it through, what is essentially, PR.

The Last Night is due for release in 2018. It will focus on a future where artificial intelligence has removed basic human principles, such as creativity. Charlie, a loner who struggles to integrate into society, is its lead.

Today we revealed The Last Night during the Xbox Press conference and have been overwhelmed with the response we have received. Both good and bad, and we specifically want to draw attention to a few things the creative director has said in the past.

We at Raw Fury believe in equality, believe in feminism, and believe everyone has a right and chance at the equal pursuit of happiness. We would not be working with Tim Soret / Odd Tales at all if we believed they were against these principles in any aspect.

The comments Tim made in 2014 are certainly surprising and don’t fit the person we know, and we hope that everyone reading this who knows us at Raw Fury on a personal and professional level knows that we wouldn’t tolerate working with someone who portrays the caricature of Tim going around the internet right now.

The wording of his statements toward feminism in 2014 was poor, and his buying into GamerGate as a movement on the notion that it represented gamers against journalists was naive, but in the same year he also cheered the rise of women in gaming. In a similar situation as the one happening now, folks on the IdleThumbs forums found questionable tweets and Tim took it upon himself to address them. What came from that was a dialogue where different viewpoints were considered and debated in a purposeful way.

Here is a link to everything including his tweets, his response, and the response of the forum; we hope you’ll take the time to read through it: https://www.idlethumbs.net/forums/topic/9728-cyberpunk-cop-killah-aka-the-last-night/

Side note: Debating Anita Sarkeesian’s efforts toward highlighting sexism in the games industry is touchy, and though Tim’s post back then was naive we felt that he wasn’t being malicious like so many others have been to Anita in the past, so we share all of this with the hope people can see that first hand. We understand that no matter what there will be people who will not look at Tim the same again and we respect that, too.

A lot can change in three years, including viewpoints, and Tim has assured us that The Last Night does not spout a message steeped in regressive stances. We trust Tim and know that he is an advocate for progression both in and outside of our industry, and we hope that this will be apparent moving forward.”

Soret has also made further tweets:

2 – In no way is The Last Night a game against feminism or any form of equality. A lot of things changed for me these last years.

3 – The fictional setting of the game does challenge techno-social progress as a whole but certainly not trying to promote regressive ideas.

UPDATE 12/06/17: Soret recently took to the stage at the PC Gaming Show to apologise for his controversial comments.

UPDATE 13/06/17: The first two images included in the article may have been faked. The Twitter user who posted them has since gone AWOL, and there is no mention of them in Soret’s Twitter history. Here are the mentions of GamerGate on Soret’s Twitter instead: 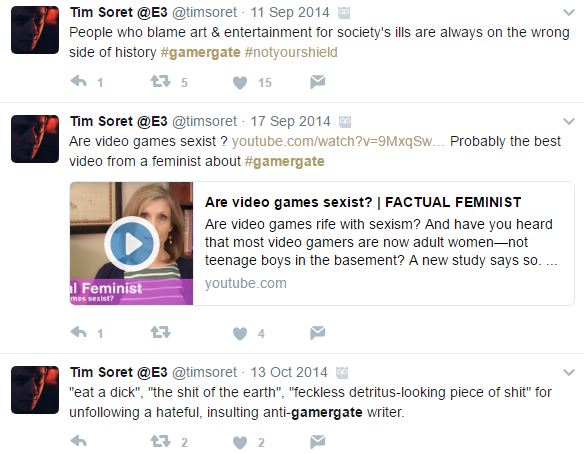 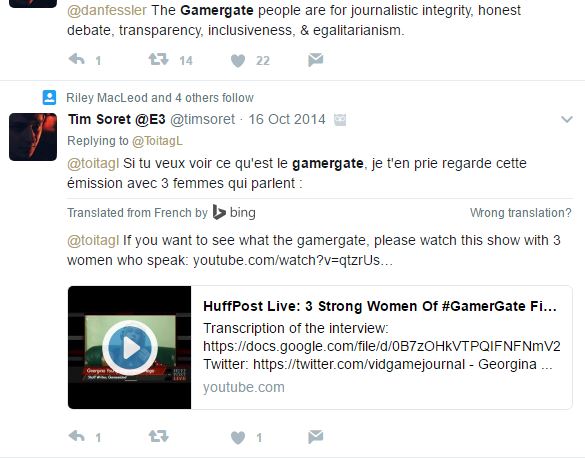 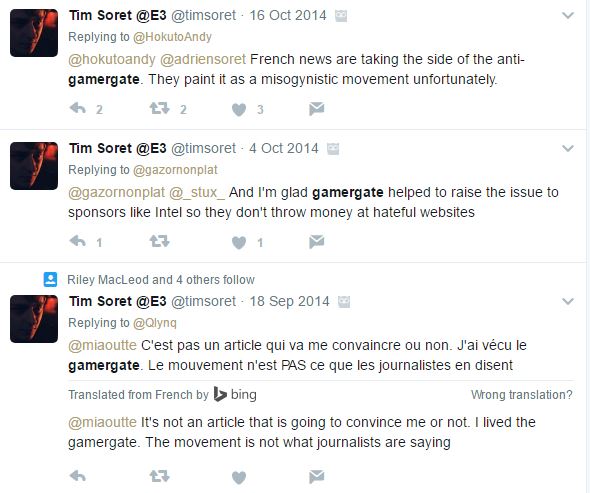 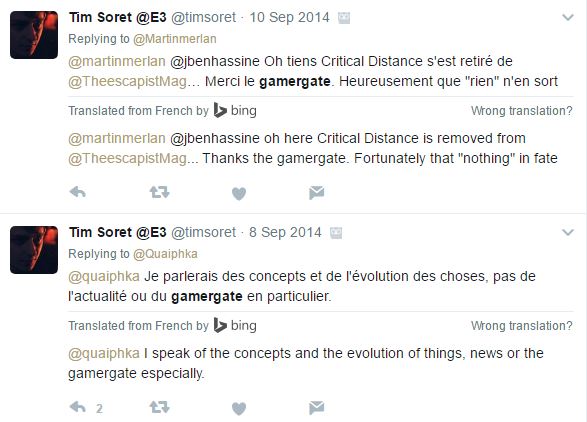