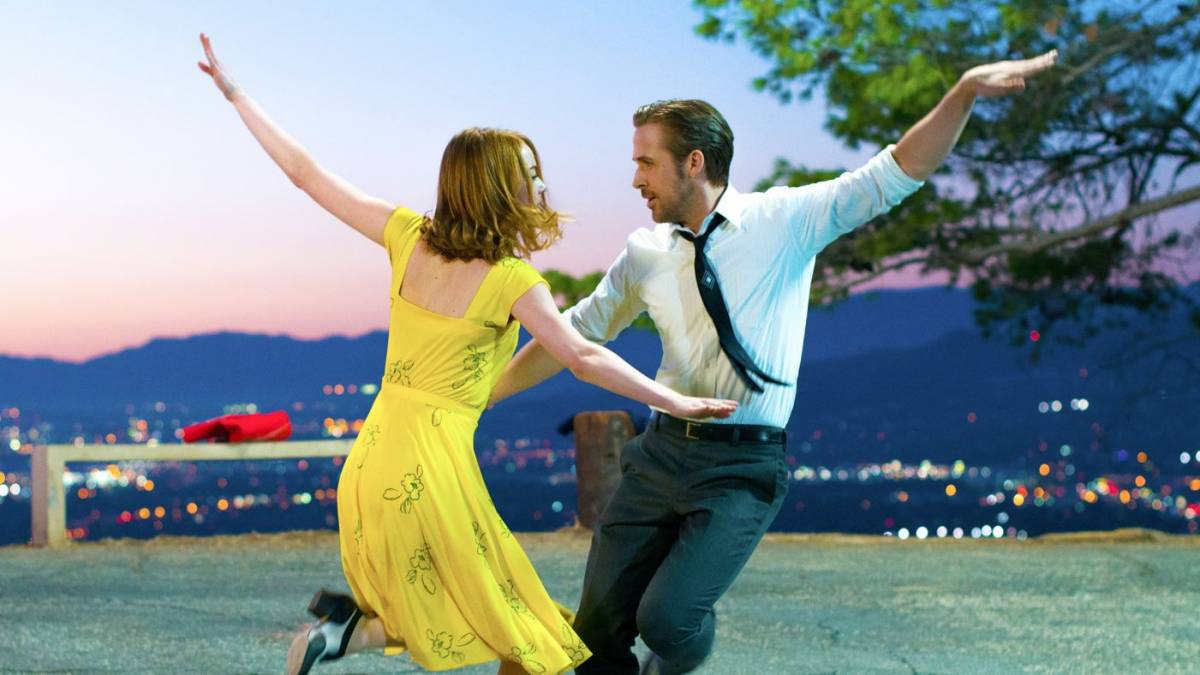 Opening with a one-take wonder, we observe young hopefuls stuck in traffic on their way to pursue their dreams. When one lady decides to sing, she is then joined by the rest in a carnival of acrobatic singing and dancing. Elsewhere, Chazelle’s camera glides around parties, dives into swimming pools and floats to the stars and back (literally). It’s confident filmmaking, bursting with visual invention.

Chazelle knows when to pull back on the style, though. La La Land has substance and beneath the glamorous veneer lies a love story that is both sweet and achingly sad. Trying to achieve the impossible in La La Land are Sebastian and Mia (Ryan Gosling and Emma Stone). He’s a struggling jazz pianist with aspirations to open his own club while she is a struggling actress working in a coffee shop. Holding Sebastian back is an ever-growing public disdain for the jazz genre. Mia’s aspirations are constantly shot down by unsuccessful auditions where she is often disrespected by casting big-wigs. They both long to achieve their dreams, what they find instead is each other.

It’s hard to think of a better screen pairing than Gosling and Stone. Their chemistry doesn’t fizz but rather explodes before our eyes. They add charm to their dance numbers, but also heartbreak when love collides with sacrifices they may need to make to be successful.

The choice between love and careerism takes hold during the third act. Both Sebastian and Mia realise that both may not co-exist to suit their needs. You won’t find anything as easy as donning spandex to get what you want here. I suspect that the outcome to this story is autobiographical to Damien Chazelle, but at least he sticks to his guns and doesn’t bow out of the safe Hollywood ending. Instead he throws a curveball that let’s you decide how you want to view the film as a whole.

I appreciated the tonal changes in the final third and felt it elevated La La Land to something more profound than a glossy homage to old musicals. Chazelle is clever enough to know that substance must be evident alongside such grand style.

Ryan Gosling and Emma Stone breathe life into their characters and while their talents should remain with the spoken word, it’s nice that their singing is a little more realistically sang, albeit a little wooden. With a two hour plus running time, they only sing for around fifteen minutes overall. It’s surprising how much of La La Land plays without actual singing. There’s plenty of jazz, though, which will please anyone who watched Chazelle’s bruising Whiplash two years ago.

La La Land isn’t quite the musical extravaganza that has been trailered. This isn’t Grease for a new generation. It’s basically Whiplash with only a few song and dance numbers thrown in. La La Land is altogether something more dramatic and revisits many of the themes Chazelle explored previously. The idea of sacrificing love for art is present throughout, though done in far less aggressive circumstances. Whiplash was a constant rush of adrenaline that overwhelmed with tension.

La La Land wants you to take in its beauty and get to know its young dreamers. The ending packs an emotional punch but most of the ride is a joyous visual feast that just wants you to have a good time.