In 1937, before he became the legendary jazz musician we all know, Charlie Parker was waiting to perform at the Reno Club in Kansas City. He was 16 years old, and flanked on all sides by older, more experienced players. One of them was Jo Jones, the drummer for Count Basie’s Orchestra (who would later go on to work with Charlie Mingus, Ella Fitzgerald and Art Blakey). Even at that stage Parker was a diligent, intelligent player who had dropped out of school purely to practice and was already grasping the rigors of complex phrasing and improvisation. Unfortunately though, he was a little out of his depth at the Reno Club and after a solid start he lost the key and the beat, prompting an incensed Jones to throw a cymbal at his feet.

Parker took it hard, but ultimately it provided the first real push that led him to becoming one of the most important, influential musicians that ever lived. It’s a story that is mentioned frequently in Whiplash, a potent, engaging film about a young drummer (Miles Teller) struggling to make his name in a cutthroat NY music conservatory, under the tutelage of teacher/conductor Terence Fletcher (J.K. Simmons). The film is named after a Hank Levy big band piece which is notoriously difficult, owing to its bizarre 7/4 meter. Andrew Neiman, the drummer in question, is very talented and frighteningly dedicated, Fletcher sees his potential immediately but the piece proves challenging even for Andrew and he loses the tempo during his first attempt. That’s when Fletcher shows his true colours.

Simmons has always been a talented, laudable performer, the decision to hire him to play J. Jonah Jameson in the Raimi Spiderman was such a perfect bit of casting that the new series seems to have deliberated kept the character off-screen because they know they won’t find someone better. More recently he impressed as the voice of Tenzin, Avatar Aang’s decendant in Legend of Korra, the sequel series to The Last Airbender. This is on another level though, as Fletcher, Simmons is manipulative, empirical, threatening and hell-bent on coaxing world-class performances out of his players even if it kills them. Miles Teller impresses as the protagonist, his first turn in a truly challenging leading role and the supporting cast are all great, particularly Paul Reiser (BURKE!) as Andrew’s timid, loving father. 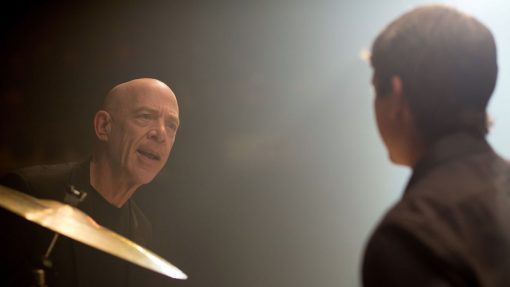 Jazz is a uniquely freeform style of music, difficult to grasp but massively rewarding once it is. The characters in Whiplash do not present it as such, and that’s half the point. Instances of musicians actually enjoying themselves as they play in this film are virtually non-existent. Andrew cries, sweats, screams and bleeds as he pushes himself to ridiculous limits in order to hone his craft. Whatever he does though, it’s never good enough for Fletcher. He doesn’t regard music in terms of enjoyment, he sees it in terms of sheer, impenetrable determination, he regards self satisfaction as the enemy of talent. Some critics have argued that framing the music in this light is a complete misinterpretation of the spirit of jazz and they would be right, but that’s by design, Fletcher and Neiman are misinterpreting it as characters and writer/director Damien Chazelle makes that the tragic guiding irony of his film.

It’s shot in a stark, Spartan fashion with only the most intermittent glimmers of a soul hidden amongst the agony and bloodshed. Striving to be the absolute best is a fruitless, self-destructive path best left for Kanye West and Ash Ketchum and the film makes no secret of that. When Neiman desperately hires a car in order to make a performance on time, only to roll it and crawl out of the mangled wreckage, still blindly determined to make the show on time, no part of you is cheering him on. This is not a film about people who love music, this a film about people who kill themselves over it.

Presenting something as wonderful as jazz in a horrifying, corrupted guise is no mean feat, but Chazelle and his crew pull it off masterfully. The razor-sharp editing, uncomfortable close-ups and crisp sound-design, filled with excruciating pockets of silence all come together to build something somehow beautiful in its sterile hideousness. Never before have I seen a film with virtually no literal violence that feels so overwhelmingly violent. In Fletcher’s version of the Yardbird story, Jones didn’t just humiliate Parker, he threw the cymbal at his head, effectively attempting to kill him. Fletcher also suggests that Parker sat up for nights afterwards endlessly practicing his key work, rather than actually going out, playing and enjoying playing. This misreading frames the fatal flaw of regarding music as a perfectionist’s art, especially with regards to something as malleable as jazz. This film is dark, gripping and utterly ferocious, it does for blind ambition what Full Metal Jacket did for military discipline, or what Irreversible did for revenge.