The second season picks up where the first left off, with all the same frenetic energy. 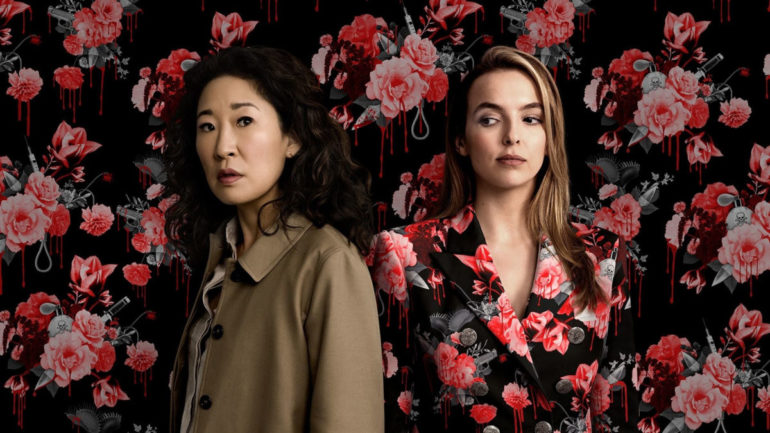 “What could be scarier than a massive little girl?”
– Harlan, That Mitchell And Webb Look

Even though the series is called Killing Eve, it’s easy to see why the books it was adapted from were named for the scene-stealing anti-hero Villanelle. Jodie Comer’s portrayal of an overgrown neurotic schoolgirl is on a par with Miranda Richardson’s Queenie from Blackadder II, surely still the benchmark for lovably deranged women, even if Comer’s giving her a run for her money.

‘Schoolgirl’ is perhaps an infantilising way to describe her character. Frankly, though, the show started it: this season literally puts her in a pair of child’s pyjamas. Further, there’s often an underlying vulnerability to her performance – and you could put that down to her age, her gender, or the horrible situations she keeps wandering into. It’s this, and the fact her various victims are usually bad eggs, that keeps her hovering on just the right side of the audience’s sympathy.

This isn’t to rag on Sandra Oh’s flustered secret agent Eve, it’s just that, no matter how glossy her hair is, in many ways Oh is playing a real person where Comer isn’t. It’s like putting Arthur Dent opposite James Bond, only with a smouldering mutual attraction. Apparently people complained that the fairly PG-13 Good Omens was ‘queerbaiting’, so I can only suggest they go nowhere near Killing Eve, where so many scenes are dancing on the edge of suddenly slipping into rough gay sex without following through on it.

(Are the various Bond girls just hapless vessels for Bond’s sublimated attraction to the villain du jour? Who knows, but you could get a seriously dank undergraduate thesis out of it.)

Beyond that, they run the gamut together. They’ve been playful,  physically fought, played out the cat-and-mouse dynamic pretty much every way round it’s possible to do it.

Even though Phoebe Waller-Bridge is gone as showrunner, replaced by her similarly posh friend Emerald Fennell (no, for real), Killing Eve still bears a lot of the same scars as Waller-Bridge’s comedy Fleabag. Namely, it features women indulging their own whims in a way fiction still usually reserves for men, even though it’s clearly a winning formula.

That’s only a statement about gender insofar as it reflects how society treats gender – mainly, it’s a statement about how storytelling works. As a species we indulge in fiction to see people take the extremes of behaviour we ourselves might not. We vicariously share in the experience of seeing fictional characters hitting fire-alarms, or making a mess out of spite, or just shooting people, and Killing Eve offers up all of these and more.

I mentioned James Bond earlier – he, and his spiritual bastard son Sterling Archer, have always been flighty, dilettantish, self-absorbed types at their core, and audiences have always loved them for it. It’s not that fiction is unwilling to depict women as flighty and self-absorbed, it’s that all too often, creators are unwilling to make this a fun thing in the same way as it is for Bond and his boozy, fuck-happy descendants.

Many have commented on the irony of Bond being a secret agent, yet constantly introducing himself by his real name. Likewise, as Eve notes to her colleagues, Villanelle’s whole thing is stagey, attention-grabbing behaviour – even when it isn’t a performance for Eve’s benefit, just for the sheer fun of it. This is shown loud and clear in that, when she’s not obsessing over Eve, she’s obsessing over fancy clothes that border on the outlandish. There’s a moment when she crows with delight on unboxing a pair of shiny trousers that really seems to summarise her character. You could call this gender stereotyping, but I point to Bond again, who was never less than immaculately dressed. And despite Eve falling definitively on the le Carré side of fictional spycraft, she’s not even trying to pretend all this showiness doesn’t appeal to her.

(I firmly refuse to make any sort of smutty pun about Villanelle ‘rubbing off’ on Eve here. This isn’t that sort of column.)

Despite being such a clearly (and I hate to invoke the f-word) feminist show, between the two leads and Fiona Shaw as a spy boss to rival Judi Dench’s M, Killing Eve has consistently had some surprisingly excellent roles for male actors. This season doesn’t give us anything quite as charming as David Haig’s twinkly old hand or Darren Boyd’s utterly useless pen-pusher, but seeing Leeds native Julian Barratt (The Mighty Boosh, Flowers) as a soft-spoken Southern creep, you realise ‘my God, the man can act!’. It seems almost perverse that, when playing so far against type, his character is actually called Julian.

Likewise, Henry Lloyd-Hughes, best known as the school bully in The Inbetweeners, turns up here as a reptilian Steve Jobs type. The central cast of The Inbetweeners reported being shocked when Lloyd-Hughes, a man as well-bred as that surname sounds, turned up for auditions as a pitch-perfect chavvy tough – which must be a bit galling for them, given that they’ve all gone on to play essentially the same roles over and over again.

However, Lloyd-Hughes’s character – impeccably acted as he is – is a useful springboard into the obvious realms of criticism of this season. Specifically, that the writers had pretty clear ideas of things they wanted to do, and were pretty devil-may-care about how they actually got there. Granted, it’s not the worst thing in the world for a narrative to be guilty of, but it still catches in one’s throat.

Lloyd-Hughes pivots drastically from being turned on by Villanelle’s defiance, to being a Hitchcock-style micromanager, and at some point in this turn they jet off to Europe together. Why? Mainly, it seems, because the plot demands it. Barratt, too, suffers from this: even given the circumstances, Villanelle ends up far too damsel-ish opposite him, and this would seem to be so he has room to stretch out and show himself off as a creep. This comes off as a bit too ham-handed of a moralistic ‘beware the nice ones’ story, one which might have worked in a soap opera, but when the purported victim is a cold-blooded assassin it rings a bit hollow.

(Though it’s perhaps telling that here, it’s the men who end up with shaky characterisation and being discarded quite casually.)

Still, it’s fairly easy to dismiss stuff like this since it’s ultimately just backdrop. The beating heart of the drama is, and always has been, the relationship between Eve and Villanelle. Of course, this isn’t simply a ‘relationship’ in the romantic sense, but it’s not necessarily not that either.

But this leads into the other major issue, and it’s the same one that crippled the BBC’s Sherlock – all the wider plotting does just end up being backdrop, blithely tossed aside to focus on the characters and their interpersonal relationships. Lloyd-Hughes’s CEO is using his company’s terrifying amounts of personal information as leverage to do whatever the hell he wants. Pretty meaty, contemporary stuff, right? Something that’s immediately relevant to the modern audience? Something that merits a serious exploration? Uh-oh, it’s been wrapped up in thirty seconds, largely offscreen.

This is one of a number of promising plot arcs that are left to fizzle out in favour of Eve and Villanelle mucking around together. Granted, this tendency is nowhere near as egregious as it was in Sherlock, which by the end had the mysteries (in a Sherlock Holmes adaptation) being left by the wayside in favour of David Moffat’s bad fanfiction, which seemed to think being convoluted was the same as being good. Unlike Sherlock, the central draw here is the interplay between the two leads, rather than everything around it, so this is focusing in on the right aspects rather than exactly the wrong ones.

This is making a pretty stark choice – you’re invested in that interplay, or you’re not, and in that case Killing Eve won’t have a lot for you. Which seems fair enough. The thing is, though, at some point you’ll be wanting the show to offer a payoff to all that, and not just to endlessly string out the cat-and-mouse (ooh, but which one’s the cat, ho ho) tension – which this second series kind of does. When Villanelle brings up the idea of them going off together like Bonnie and Clyde, you can’t help but think “Gosh, that sounds interesting – go on, show, write that!”. But then, where would we be if fiction just gave us what we want the whole time? 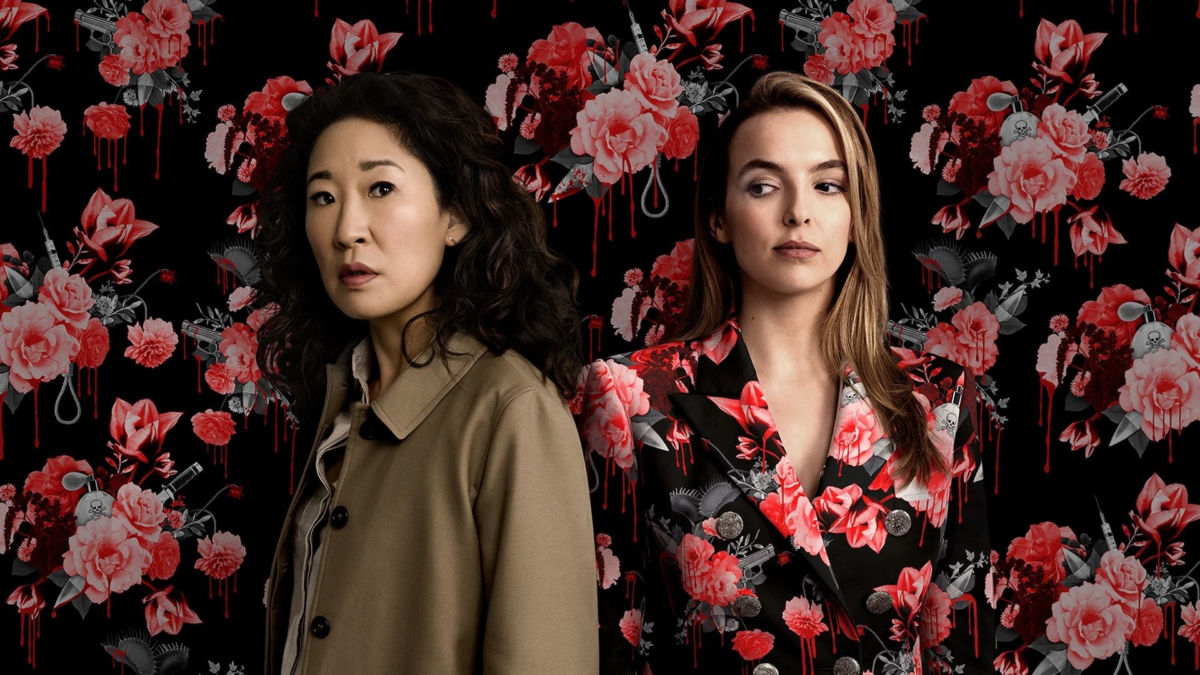 Verdict
Killing Eve’s mask of polished spy drama continues to slip and reveal a genuinely compelling tale of obsession and – dare I say it? - desire.
9
Cultured Vultures is a pop culture website established in 2013 covering all things gaming, movies, and more. We eat your words.
All The News On The Biggest Games