INTERVIEW: David & Lorenzo Henrie on This Is the Year, 80s Movies & More

The brothers share their experience working together on This Is the Year, and plenty else. 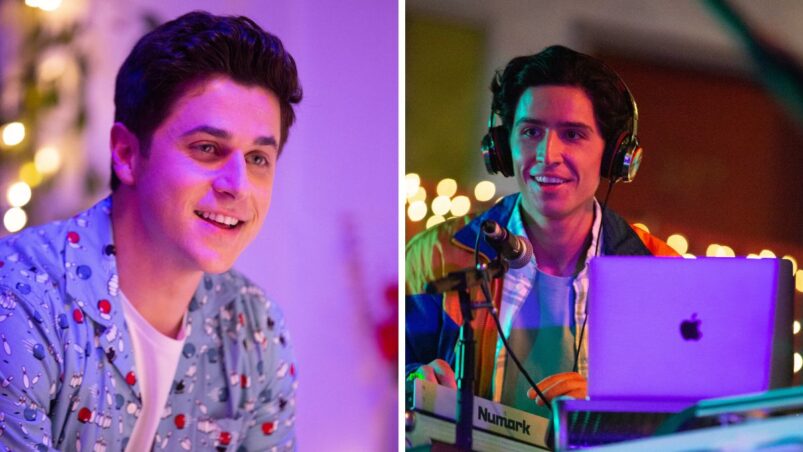 David & Lorenzo Henrie in This Is the Year

I sat down to speak with director David Henrie and his brother Lorenzo (who plays the main character Josh) about their new movie This Is the Year.

David Henrie is an American actor, producer, director, and screenwriter. He is known for playing Ted Mosby’s future son Luke Mosby on How I Met Your Mother and Justin Russo in Wizards of Waverly Place. Lorenzo Henrie is most commonly known for playing Chris Manawa in AMC’s hit series, Fear the Walking Dead.

What was it like working with each other on this project?
D: It was so great because our goal was to make a movie that the whole family could sit down and watch. We made a movie primary for teens, tweens, middle-school and high-school, but we wanted a movie that the whole family could watch, so we created a family atmosphere on set, I got to work with my brother…the fact that I knew him so well, he was able to give me what I needed on camera quickly, which saved us time and allowed us to get shots in addition to what we already planned, so creating that family atmosphere on set, hopefully that love will translate on camera and give the whole family an experience of a feel good movie that they can very much enjoy with their kids.

What about for you Lorenzo? You can tell us if David was a dictator on set. [We laugh]
L: I ditto everything David said. And the fact that we were able to do this as partners, produce it as a family company, direct, act…one of our goals was really to service other people on set – the grips, the hair and makeup. I think because I was a producer on the film, I was able to be in the hair and makeup room, and hear what they needed, then go tell the producer, who’s our father – the COO of our company – to say: “Hey pop, here’s the things we need.” With the actors as well, like, catering wasn’t good today, let’s Uber eats some food for you guys at a better restaurant. Those things you can’t do unless you are producing it, which we were able to do and make everyone feel good, so I hope that translates on screen to a good product.

The film pays homage to iconic teen 80s movies, like Say Anything, Footloose, Back to the Future, Fast Times at Ridgemont High. So, if you could choose an iconic 80s teen film to be the story of your life, which film would you choose?
D: Oh shoot! There’s so many…all those movies that you just brought up was part of the influence for the film, that was the goal. Any 12 or 13 year old sitting down with their mom and dad to watch the film, I want the mom and dad to have something where they go: “Oh! I like that!” or “That reminds me of something”, but at the same time it’s new and fresh for the 12 year old who’s the core demographic. I wanted the parent to sit down and get something out of the film as well. And yeah, all those movies I grew up watching really inspired me. I am trying to think of which one might be the one…
L: I spent a lot of time in detention back in high school so I think –
D: Ferris Bueller?
L: Ferris Bueller and/or The Breakfast Club. [laughs]
D: I would go with Ferris Bueller because I wanna drive that sweet car.

In the film, the main character Josh wears this windbreaker, and calls it a great conversation starter. What piece of clothing or accessory that you own do you feel would make a great conversation starter?
D: [laughs] That’s a great question! I’m trying to think…I got a couple obnoxious blazers, like really loud, colourful blazers…I actually have one. It’s a trench coat, it’s like bright shiny red, never worn it, but if I did wear it…it’s like the colour of your lipstick but even redder…head to toe, shiny. I think it’s meant for the rain, but it does not look like it would do very good in the rain, so I’ve never worn it. But yeah, that would be a great conversation starter. It’s like watching a literal lipstick walk down the road.
L: Yes, it hurts my eyes whenever I see him wear it.
D: I’ve never worn it. [We laugh]
L: Yeah, but it hurts my eyes. Every time I wear my little newsie cap, everyone always comes to me and are like: “I gotta get one of those!” So, I kind of think that one’s a conversation starter.

Did you keep the windbreaker?
L: It’s somewhere in the garage.
D: It’s funny that you bring up the windbreaker though, that’s very much a part of Josh’s arc, of expectations versus reality. I feel like young people nowadays deal with social media, movies, television, telling them how their lives should be, and they might have this overidealistic expectation of how their life is supposed to go – the girl they’re supposed to date, what they’re supposed to do with their lives. They expect so much, and that’s not the reality a lot of the times, and sometimes reality can be even more beautiful than the expectation, so his windbreaker really symbolises and overidealistic love for 80s movies, so he tries to emulate those. As the film progresses, he starts to deal with that in a literal way, and the windbreaker really plays into that symbolically.

The film is a coming of age teen flick, but do you think you also meant it as a love letter to the movies?
D: Absolutely! A 100%. I hope it has a nostalgic feel to it, cause that’s kind of what I was going for, someone my age can sit down and watch and go “this makes me feel good”. Kind of like the movies I watched when I was growing up, so absolutely a love letter to past 80s and 90s coming of age films that I grew up watching. Hopefully it has the same warm feeling as some of those movies, just in a more modern context.

So Lorenzo, what was it like playing Josh? Do you feel that you share any similarities to the character? Are you maybe a DJ on the side as well? [We laugh]
L: Yeah, every Friday and Saturdays. I think David tried to write Josh in a way that people could relate to him, where a lot of kids in high school deal with that theme of expectations versus reality, where they try to go after this girl that is more of the pretty “hot” girl; he doesn’t even know who she is. They try to chase things that are not reality, instead of falling in love with that person who truly wishes the best for you. There are a lot of themes in Josh’s character arc that I relate to, but also a lot of kids relate to in high school, especially the pressures of social media and all those things going on…he’s a good guy.

You guys have another project that’s coming up – a Netflix series called A Tale of Dark and Grimm. Do you want to tell us a little more about it?
D: A Tale Dark and Grimm is based on the New York Times Bestselling book of the same name; it’s a new spin on the classic Grimms fairytales. A lot of the modern day fairytales stripped away a lot of the meaning of the original fairytales, a lot of the scary elements, because they feel like kids can’t handle it, and what’s great about the books is that it puts a lot of that meaning back in, and believes that kids can handle it – it’s okay to scare but you don’t want to scar. So, we put in all that rich, psychological development that went into the original fairytale – we’re telling fairytales authentically told in a whole new way. It’s the story of Hansel and Gretel, who seek the perfect parents, so they run away from home because their parents chopped their heads off. But don’t worry! They get put back on. Like I said, it’s scary, but it doesn’t scar and it has a lot of profound meaning – it’s another one that the whole family can sit down and watch, for that 6 to 10 audience, that’s our demographic, but the whole family can sit down and get something from it.

When I interview first time directors, they tell me that now that they’ve gotten a taste for directing, they never want to go back. Do you feel the same way?
D: Totally! I feel like you learn so much, it’s an exciting time…once you’ve had that taste of it, you can’t leave, you want to keep going. So I learned what to do, what not to do, and I can’t wait to do it all over again. We have a lot of things percolating that we’re excited to do here soon, so standby, because there are a couple big things coming down the pipeline

Last question: which is better, real life or movies? [We laugh]
D: That’s a great question!
L: Depends on the day.
D: Both work hand in hand, one can help inform the other, and life is all about the golden mean as Aristotle would describe it – coming right in the middle, not being too excessive on one side, or not being too defective on the other. Shoot right in the middle and I think the goal with this film was to try and harmonize the two. Not painting too overidealistic of a view of the world in films to where it’s unrealistic, and you’ll never get that thing, but at the same time, not negating that and saying movies are bad – they are a glorious and beautiful thing. I think storytelling can help make sense of the problems of life, and can help straighten out life’s path for the viewer, so our goal is to really create harmony with the film, and we hope that the viewer will take that away.

This Is the Year will be released in theatres and on streaming September 24, 2021, and A Tale Dark and Grimm will hit Netflix October 8, 2021.