Sometimes it's okay to lose. 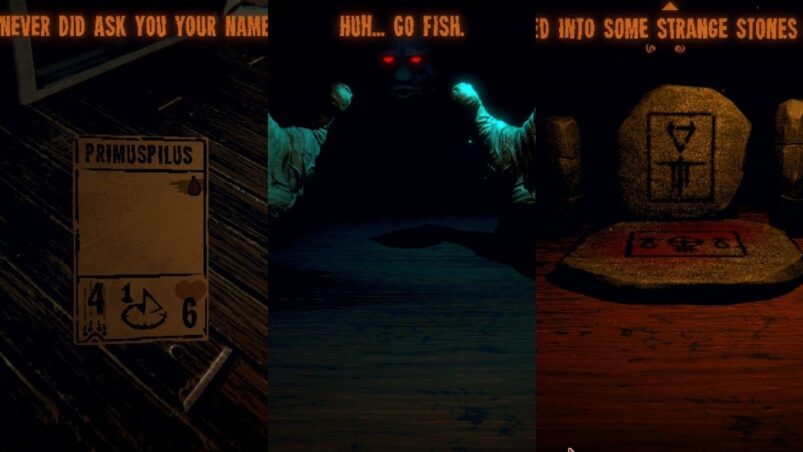 Inscryption may seem like a straightforward roguelike card game on the surface, but there are a lot of twists, turns, and funky elements that make it more than just another card game. To get you on track with the game’s idiosyncrasies, here’s a helpful Inscryption strategy guide to get you started.

Players will be playing lots of combat encounters in Inscryption with the goal of defeating their opponent. Unlike most card games where players achieve victory simply by assaulting their adversary until their hit points drop to zero, in Inscryption you’re rewarded for dealing more damage than is needed with a special resource. This resource can be spent in special adventuring locations out of combat to purchase new cards, upgrade cards, or get new items.

Tying closely with the previous tip, occasionally your opponent may call for a surrender midway through a combat engagement. There are only a few circumstances when this would be a viable option. Typically, it’s more profitable to continue the encounter to cause as much overdamage for extra resources, even if it means going through the motions of a foregone conclusion.

On top of being a card game, Inscryption is also an adventure-puzzle game. And there are plentiful puzzles littered throughout the initial starting cabin, but also in the greater game world once the players escape the cabin. A good portion of the puzzles are actually vital to progressing the narrative, so it’s a wise idea to get in the habit of actively seeking out puzzles and solving them.

Though Inscryption’s world may not be massive in scope, there are still plenty of opportunities for experimentation and poking around different corners. This is actively rewarded in the game not just with resources or items, but also with additional lore and opportunities for branching paths. You might even stumble into something that could give you an edge in an encounter or prepare you for what’s to come.

The most common rewards for exploration and puzzles are extra cards. While more cards in the player deck isn’t always better, it still means the player has more options to work with in encounters, be it combat or otherwise. Once the player escapes the cabin and reaches the wider world found in Inscryption individual cards can give to full card packs, which give the player even more options with which to play with when interacting with the game’s enigmatic characters.

Use Your Pack Items

Aside from their core playing cards, players will have access to additional support equipment that can give some kind of benefit, an extra card, or play with the game’s rules in some ways. It may initially seem that it’s better to use such items sparingly to save them for really challenging encounters. However, there will be plenty of opportunities for players to find new items and restock that it’s encouraged to use their special pack items to gain an advantage, especially if it means causing overdamage in a combat encounter.

Don’t Over Stack Your Deck

Deck-building is a prominent card game feature in Inscryption where players will need to augment their small starting deck with new cards. There might be an initial desire to simply get as many cards as possible, since there are no apparent drawbacks. In actuality, keeping decks lean or at least with a balanced size so that draws are predictable will be more consistent in helping players win combat encounters.

One of the most effective ways of keeping card deck size in check is through card upgrades. In the initial cabin, this could mean combining duplicates into one at the Mycologist or sacrificing a card to transfer its effect to another more valuable one. Safe to say, there will be plenty of opportunities to affect cards in a variety of ways to increase its strength without making it unwieldy and inconsistent.

In combat encounters, the player’s creatures will always get the first attack when they ring the bell. It’s entirely possible to defeat the opponent before their creatures are even able to deal damage back. Because of this dynamic, the game generally favors high attack creatures that can deal the killing blow, not to mention that if a creature overdamages a target in front of them, said extra damage will spill over to creatures behind the target.

You might think that Inscryption is all about winning and being as efficient as possible. In the first portion of the game when stuck in the cabin, there’s actually a benefit to purposefully losing and throwing games, as some puzzles and items might refresh.

There are also some narrative events that won’t trigger until the player has been defeated a certain number of times. All this means that the player can spend more time exploring, doing more puzzles, and learning Inscryption’s strange world.