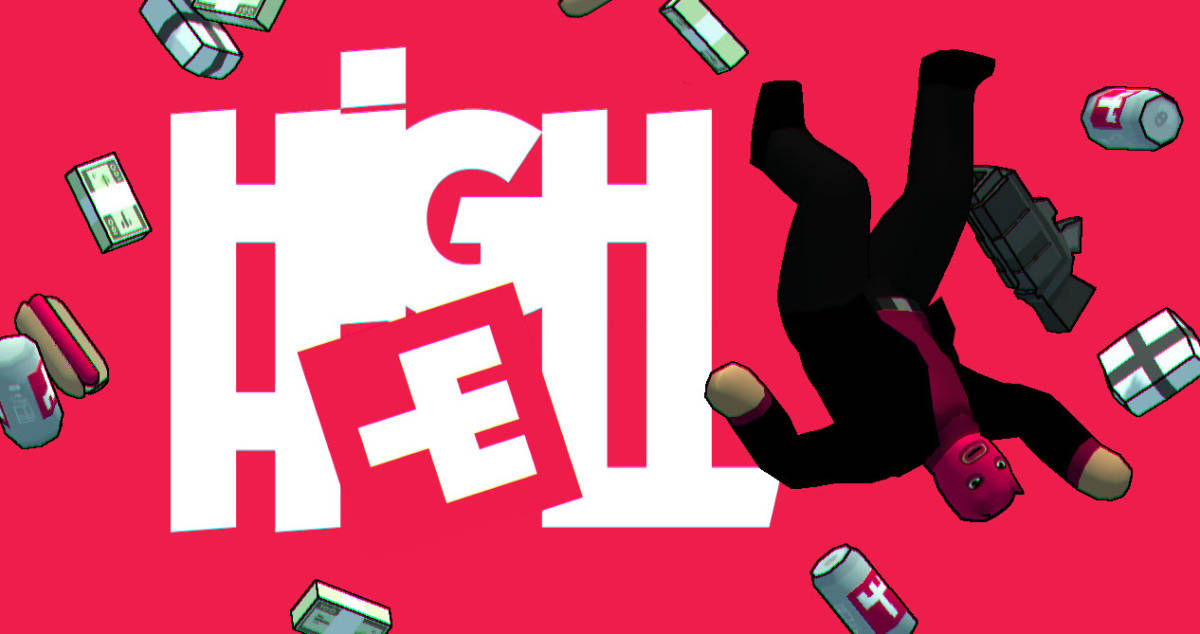 High Hell wastes absolutely no time with cutscenes, characters or context. You are dropped into its first level, one of many gray skyscrapers, construction sites, and increasingly outlandish demonic strongholds, the scenery and props awash with reds, yellows, greens and more to make the clutter, objectives and enemies stand out. You’re tasked with kicking down a few doors and crouching under a barrier on your way to steal your sole weapon for the game’s two-hour duration – a soul-stealing shotgun that leeches the health from enemies and returns it to you.

This is a handy function, because High Hell’s demon henchman, suicide bombers, attack dogs and more all hit hard and hit fast. Even dodging the basic mook’s single-shot, laser-sight-telegraphed shot can be a doozy if there is more than one or they get the drop on you. The aforementioned suicide bombers often hide in blind corners and are the fastest enemies in the game – good luck hitting them once you’ve aggro’d them.

The lethality of the enemies and the nature of your health restoration (a single full health pickup exists in later levels, but other than that you’re on your own) encourages an unusual pace of gameplay – there is a validity to the tactic of “kick in every door guns blazing,” but you have to back that brazenness with a high competency for precision shooting and bobbing-and-weaving. Enemies will not let you breach a door without an immediate and punishing response – often the more careful and considered approach is better, especially for your first run of each of the game’s 20 missions. Most levels feature multiple paths, with a focus on verticality and flanking that let you take advantage of skylights and unguarded doors to get the drop on tougher foes and groups.

If you forced me to compare it to something, I’d say High Hell is like a slightly more forgiving Hotline Miami in first-person. You can take a bit more damage, but lose the clairvoyance of the top-down perspective – the sooner you accept that you’ll die more than average in most shooters, the more fun you’ll have with the trial-and-error nature of High Hell.

Replaying sections of levels you die in is seldom a problem; one of the boss fights (which appear every five missions) frustrated me because I kept dying long before I could test out any of my theories as to how to remove the boss’s protection. This made me feel like I was just beating my head against a wall, until I learned the layout of the level and the boss’s pattern through some deliberately-sacrificial runs. There aren’t many ways to interact with High Hell’s environment – you can kick it, shoot it or press it/pick it up, and the solution to any obstacle will always be a combination of that and your movement abilities.

I say movement abilities, but really it boils down to run, crouch and jump, with a sort of jump-jet that slows your falls to remove fall damage concerns. These limited inputs and abilities never feel like a drag, however, due to both the short length of the game and the increasingly complex level design. Later missions feature so many nooks and crannies for enemies to ambush you from, not to mention vertical blind spots and sniper loopholes that you’ll be too concerned with frantically killing every threat coming at you to worry about anything else.

The levels themselves, from their design to the props and set dressing that lend them their unique character, really elevate the game in a way that the gameplay by itself simply wouldn’t be able to handle. Your foes are a cabal of odd demons, many simply clad in red ski masks and leather jackets, who are obsessed with money, drugs and hot dogs. Some of them run around in their underwear, others entirely naked (complete lovingly rendered floppy bits), all trying to kill you as bricks of cocaine, empty beer cans and copious amounts of sausage fly around in response to the explosions and gunfire. Bits of destroyed scenery and hilariously-posed ragdolls are the leavings of a good shootout in High Hell, and it never fails to amuse.

The action itself is highly enjoyable, though it can take a while to sink in (hence my special appreciation for the humorous aftermaths) as you find your footing with the pacing and required level of precision, reflexes and general playstyle. Gunfights feel like 80’s one-vs-all action movies, with your hero (a generic, never-named character whose face you can customize with a square .png file) storming drug labs, goat sacrifices, warehouses, offices and even a docked zeppelin, always with the goal of ruining every bad guy present and trashing their stuff.

Each level has a main objective and usually a side objective, always a variant of “find, steal, turn off or kill X.” High Hell makes efficient use of its two hour runtime, with new enemies and curveballs in the environment introduced just as you become used to the way things are. Each level takes between a minute or two or as long as five or six, depending on your skill level and aggressiveness. You are scored at the end of a level based on time, objectives completed, enemies killed and how much of their money you burned. Boss fights can take a few tries to figure out, but are relatively short and simple once you figure out the trick.

That’s the best way to describe this game – short, simple and enjoyable once you figure it out. Its weird visual design and thematic content has an undeniable charm to it, the action is frantic and gratifying to get better at, and it’s great fun to go back through favorite levels, whether for a better score or just because.

The minds behind High Hell includes Doseone, known for Enter the Gungeon and Gang Beasts, and Terri Vellmann of Heavy Bullets. That pedigree and the blending of their styles is evident here, and it certainly makes for one hell of a fun game. It could use a secondary weapon or two and some other movement abilities (perhaps a functional grappling hook, like the one that appears as a prop at your insertion into each level) just for kicks, but what’s here is more than enough enjoyment, especially if you’re the type who enjoys beating yourself and others in high scores and speed runs.

Verdict
Short but sweet, High Hell could benefit from a bit more variety in player abilities and weapons, but nonetheless makes the most of what it has to create a chaotic, challenging and gratifying few hours of vulgar, hilarious mayhem.
8
Cultured Vultures is a pop culture website established in 2013 covering all things gaming, movies, and more. We eat your words.
All The News On The Biggest Games