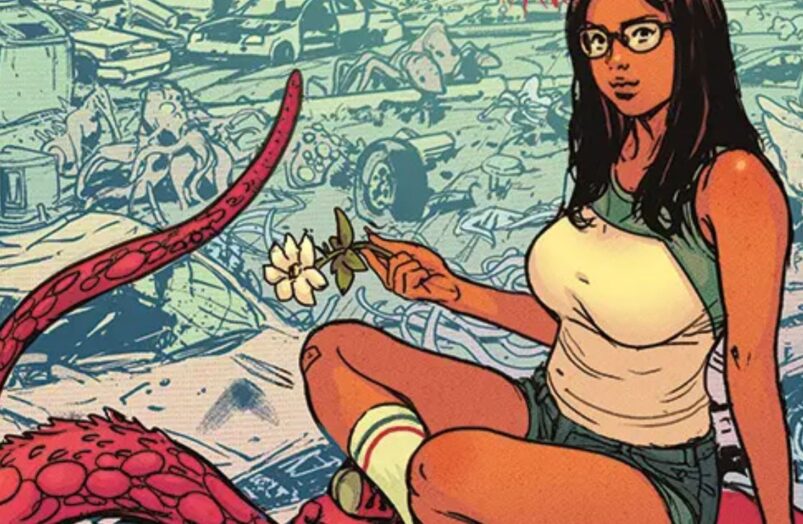 If there’s one thing most horror fans love, it’s a good monster story. Since the publications of great gothic works such as Mary Shelly’s Frankenstein in 1818 and Bram Stoker’s epistolary novel Dracula in 1897, monster literature evokes emotions almost as frightening as the monstrous characters themselves.

Among these early horror authors is H.P. Lovecraft. Although a controversial figure, Lovecraft combined science fiction, fantasy, and horror to craft shocking horror monsters so influential that the literary subgenre “Lovecraftian horror” stems from his impact. Heart Eyes #1 from popular horror/sci-fi/fantasy publisher Vault Comics, infuses elements of Lovecraftian horror throughout its eerie debut that will unsettle readers.

In the comic, sanity-consuming beasts ripped straight out of one of Lovecraft’s novels decimate the Earth. A young streamer tries to capture some of the mayhem on his phone, only to find himself engulfed by the oozing tentacles of the beast behind him. Humans are the prey here, that much is clear, but the narration offers food for thought: Humanity was already on track to self-destruction. The monsters only expedited our inevitable destruction.

Wearing glasses and an atypically trendy outfit for an apocalypse, main protagonist Lupe wanders the San Antonio streets seemingly unphased by the destruction around her or any looming monsters. At one point, we see her crying briefly before she wipes the tears away and plasters a huge smile upon her face — looks are deceiving in this comic. Right away, Heart Eyes #1 establishes how the happy-go-lucky Lupe conjures that fear of unusual phenomena within Lovecraftian horror all on her own.

Eventually, the carefree Lupe stops to pick up an octopus stuffed animal before a young man emerges from below the Riverwalk and pulls her underneath. This is where she meets tunnel-dweller Rico. For Rico and his family, the underground provides safety from the monsters waiting to destroy the fragments of humanity on the surface. An instant connection forms between Rico and Lupe, despite their diametrically opposed attitudes.

Lupe’s infectious outlook on their generally dire existence encourages Rico to explore the outside he fears so much together. Love in the time of the apocalypse makes a sort of sense. When the world has already been ravaged and survival becomes everyone’s main concern, distractions away from panic are welcomed by some. Although Rico’s family raises legitimate concerns about Lupe’s odd behaviour, it’s hard to root against a cute romance for the traumatized Rico.

Heart Eyes #1 exudes a Lovecraftian ambiance. Aside from the narrative fusing fear into its hopelessly apocalyptic setting and disconcerting main character Lupe, artist Victor Ibáñez layers Lovecraftian details into his linework with a precision most akin to cinematic poster renderings. Terrifying monsters engulf multiple pages across two-page spreads, reducing humans to insignificant minutiae in true cosmic horror fashion. Almost as if the creatures are leeching color from the page, Addison Duke’s saturated hues imbue the comic with an ominous tone. Monstrous roars emit nearly audible vibrations through Simon Bowland’s lettering and SFX work. The fear factor dials up quickly throughout the comic.

As humans, we fear what doesn’t feel natural. It’s why shock reverberates in our hearts when we hear or witness unspeakable acts of violence. Yet, because of social media and oversaturation of information, we’re acquiring a slow numbness to real horror enacted by mankind. And we run to what does feel natural during those overwhelming feelings of dread, such as a source of love. Heart Eyes touches on each of these themes poignantly in its first installment.

Heart Eyes #1 is unique in that it fully leans into Lovecraftian horror yet turns the subgenre’s core theme of fearing the unknowable on its head, and I can’t wait to read more.