20 Years On, Halo: Combat Evolved Is Cemented As An All Time Great 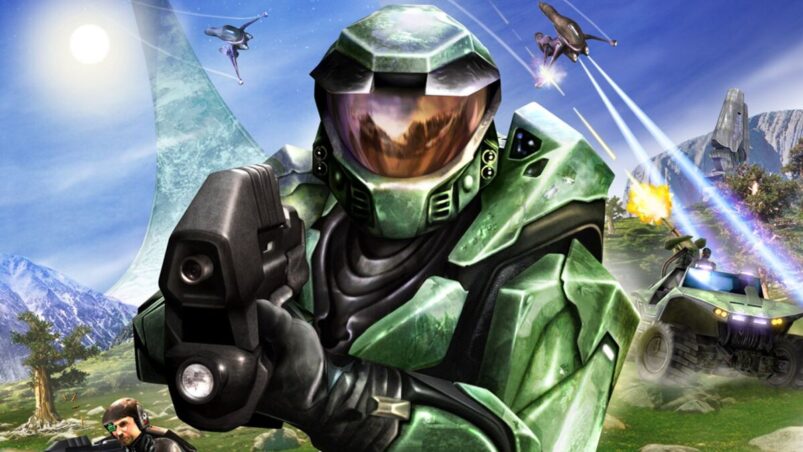 There’s no getting away from the fact that today, November 15th, 2021, marks the 20th anniversary of the release of Halo: Combat Evolved. It’s a scary realisation if, like me, you were 10 years old at the time and are now a fully grown adult with a family to look after and a mortgage to pay. Back then, platformers, action-adventure games, and RPGs dominated the console space, but Halo changed that, popularizing first-person shooters on every platform.

However, in all honesty, Halo: CE wasn’t that original a concept and certainly can’t claim to be the first FPS on a console. In fact, it wasn’t even Bungie’s first release featuring an armored marine in the near future working with AI companions to battle a hostile alien force. What it did do so successfully, though, was blend lots of different ideas together in a neat package that few others have managed this well before or since.

Halo offered a bit of something for everyone and all of it was fine-tuned and balanced from the get-go. There was exciting vehicular combat, with players able to pilot tanks and weaponized 4x4s along with alien Covenant machinery. The multiplayer contained a huge variety of maps and game modes, allowing smaller action-packed matches or larger and more tactical battles. But more important than all of that was the inclusion of a proper story, something that was practically unheard of in the genre.

The narrative in Halo: CE drove everything along and created an air of mystery, pushing you to uncover the secrets hidden away on the giant structure. Bungie took a more cinematic approach to storytelling than what came before, including long cutscenes and lots of in-game dialogue to add exposition. Players stepped into the role of Master Chief, a biologically augmented supersoldier, as he battles against the Covenant on a strange world built by an extinct civilization. It’s a classic sci-fi tale inspired by the likes of Ringworld, Ender’s Game, and Starship Troopers and, with a few twists, captivated fans.

The Chief himself resonated with players, despite largely being a faceless vessel that fans use to experience the story. He instantly became a mascot for Xbox and one of the most recognisable characters within the industry, known around the world by his iconic battle armour. Only the likes of Mario and Sonic can claim to be as famous with gamers and the general public.

Aided by the beautiful presentation and gorgeous orchestral soundtrack that was almost unlike anything seen on a console up to that point, Halo: CE was a game just begging to be explored. Players were even given the freedom to go at their own pace and poke around, rather than going from corridor to corridor in a linear fashion.

Of course, Halo: CE also marked the start of a franchise that has not only dominated the gaming world but also expanded to other areas. Along with spin-off games and sequels, there are comics, novels, and toys based on the series, as well as a big-budget TV show coming to Paramount+ next year. Halo is one of those few gaming brands that has jumped into the public consciousness and established itself as part of popular culture. That’s a massive achievement and incredibly impressive for a title that started life as a real-time strategy game for Mac computers.

It’s also hard to imagine the Xbox brand without Halo, with Bungie’s debut effort helping to prove that the Microsoft console could work. While the first console never set the world alight, Halo and its sequel gave it the jump-start it needed, establishing a foothold in the industry. Millions bought the console just to play Halo: CE and the Xbox 360 went on to build on that as a hugely popular system with games like Halo 3 and Halo: Reach. The Halo franchise has always played a big role in the popularity of Xbox and that could be demonstrated once again with the launch of Halo Infinite.

In a world where a great majority of FPS games look the same, with even the Halo franchise itself straying somewhat, Halo: CE is a shining example of what developers can do to stand out. The way that 343 Industries has gone back to basics and is rebooting the series with Halo Infinite in an attempt to bring back that Halo: CE magic just shows how timeless many of its ideas were and how they still hold up today. It paved the way for much of what was to come in modern FPS games and every shooter since owes a debt of gratitude to the game in some way.

READ NEXT: Halo Infinite: The Story So Far