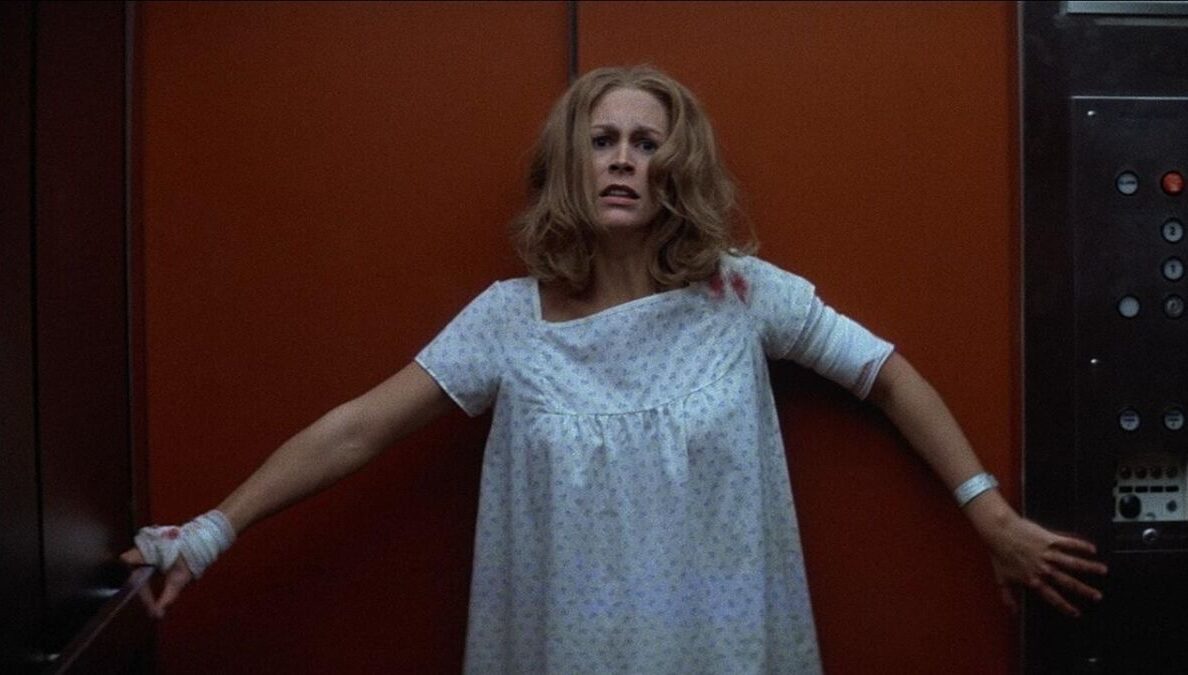 Whereas the original film is shrouded in the mystery of what is happening, sequels get to the gory goods faster.

The audience knows the players. They know the stakes. And they are ready for more.

With 2021 marking the 40th anniversary of director Rick Rosenthal’s Halloween II, the film remains a masterclass of a slasher sequel.

Opening with the briefest of flashbacks, we relive the haunting finale of John Carpenter’s 1978 slasher classic Halloween. We watch as psychiatrist Dr. Loomis (Donald Pleasence) guns down the masked killer Michael Myers, only for Michael’s body to disappear moments later.

To little surprise, he is still very much alive, free, and headed to Haddonfield Memorial Hospital, where final girl Laurie Strode (Jamie Lee Curtis) is being treated for injuries sustained earlier in the evening.

Halloween II succeeds where many slasher sequels fail, as the film abides by the “bigger and bloodier” methodology, but never at the expense of its narrative and pacing. The film’s coherence is undoubtedly thanks to John Carpenter and Debra Hill returning to produce and write the script — their contributions cannot be understated in shaping The Shape’s stellar second outing.

How easy would it have been for them to recycle the urban streets of Haddonfield? Instead, the sequel opts for the more confined and claustrophobic siege-esque setting of Haddonfield Memorial. The isolated nature of the hospital is the perfect stage for Michael to step briefly from the shadows to add another notch (or ten) to his murderous belt.

And with the new setting, a new creative means for him to hunt his prey.

There is level-headedness to how his ferocity is approached in Halloween II. We see the increasingly intimate and more elaborate ways Michael hunts, slaughters, and stages his prey. And while the body count is greater, and the means he kills is far nastier, it never feels outside the realm of what Michael has always been capable of.

While Halloween II is very much the beginning of Michael’s overt transformation into The Shape, the film’s kills are representative of his growing comfort with killing.

This is evident in Halloween II’s unmissable mean streak, and the sequel’s nastier tone is set long before Michael’s first victim. Early on, we see a mother rushing her son to Haddonfield Memorial, holding a towel to his mouth as blood gushes from it, the result of a razor blade being lodged in his mouth.

Perhaps there’s more than one monster in Haddonfield tonight?

While inconsequential to the rest of the film, this brief but graphic moment defies an essential rule Carpenter and Hill established with the original: Oh, yes, there will be blood.

The increased violence is evident from every kill, as Michael has evolved from “simply” slashing and stabbing his victims. With experience comes his willingness to experiment with all manner of medical instruments lying around his new hunting ground.

Michael’s actions seem less abrupt or reactionary, and thus more methodical, as if he has begun taking ownership and pride in his *ahem* work.

Whether it’s Michael repeatedly dunking nurse Karen Bailey’s head into a 200-degree hot tub, introducing Dr. Mixter’s eyeball to a syringe, or draining all of Nurse Virginia Alves’ blood from her body with a severed IV line, you could say The Shape has a very little chill in how he chooses to end his victims.

These kills are complemented by Rosenthal forcing the viewer to stew in kills a few beats longer than Carpenter ever dreamed of. As if to say, “Sure, Michael’s back, but unlike you’ve ever seen him before.”

Michael’s skewering of Nurse Franko is the most blatant example of his showing off his handy work. Adding insult to the injury of impaling her in the back with a scalpel, Michael then proceeds to lift her off her feet, holding her in the air like a game hunting trophy as Laurie tries to parse what she’s looking at.

A majority of my praise for the film wouldn’t hold true if the sequel were to pick up several years later. But there is purpose and power in this film being an extension of a single night rather than a more traditional sequel. It’s taken a few viewings for it to truly sink in, but it’s easy to forget that the events of Halloween II are mere minutes or hours after the events of the original.

Additionally, Halloween II signifies Michael’s transcendence into The Immortal Shape. Sure, he survived being shot six times, but, who knows, maybe he was wearing a kevlar vest under his coveralls, right?

Whether it’s The Shape ignoring his hand being scolded in the hot tub, playing possum after being shot multiple times by a state trooper, or only being blinded when Laurie shoots him in the face, his invulnerability is now undeniably otherworldly.

And while he’s literally set on fire at the end of the film, it comes as no surprise that, much like a phoenix, he is destined to rise from the ashes.

Albeit a homicidal phoenix.

When discussing Halloween II, I always recall a scene from the original film, in which Dr. Loomis and Sheriff Bracket discover a mutilated dog in the old Myers’ house.

Loomis comments, “He got hungry,” and while some have interpreted this line literally (as in, Michael decided to munch on some poor pup), I always interpreted it as Loomis commenting on the reality that Michael’s appetite revolves around death.

An unstoppable killing machine that has been unleashed by his own accord or from some sinister divine power onto the citizens of Haddonfield. Quite literally turning their town into hell on earth for many that reside there.

And, if you ask me, a forty-year franchise spawning 12 films certainly corroborates that The Shape’s appetite for death and destruction shows little indication of ever truly being satiated.

READ NEXT: 10 Years Later, Is The Thing (2011) An Underrated Prebootsquel?