God of War Ragnarok: Where To Find Chaos Flames 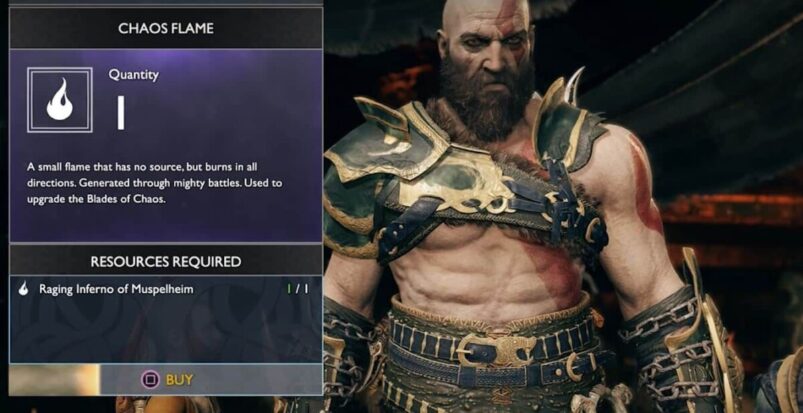 A small flame that has no source, but burns in all directions. Generated through mighty battles.

Chaos Flames in God of War Ragnarok are valuable weapon upgrades used to increase the statistics and abilities of the Blades of Chaos – the second weapon unlocked in the game. Playing the game and progressing the story will naturally reward Chaos Flames in order for Kratos’ weapons to become more powerful.

If you’re looking to power up the Blades of Chaos, you’ll need more than just Chaos Flames – keep an eye out for Chaos Sparks, too. The Chaos Flames are a valuable resource though, and can be found in multiple areas, usually after boss fights.

Chaos Flame 1: The first is after defeating the Dreki in Svartlefheim during The Quest for Tyr. Seeking Tyr, a large lizard known as the Dreki rises up to attack Kratos and Atreus. Defeating him drops the first Chaos Flame.

Chaos Flame 2: The second can be gained by defeating Forest Ancient in Vanaheim during The Reckoning. This happens whilst aiding Freya in Vanaheim.

Chaos Flame 3: The next is rewarded for defeating Frost Phantom in Midgard during The World of Fate. Freya aids Kratos in defeating this powerful foe.

Chaos Flame 4: Another is given for defeating the pair of Dreki in Vanaheim during the Creatures of Prophecy quest. Just as the Dreki before, only double the trouble. These beasts will attack on the way to Freya’s base camp.

Chaos Flame 5: The next one is gained by defeating the Soul Elder in Muspelheim during The Summoning. Similar to the Forest Ancient, this beast guards the main story’s final Chaos Flame.

Take your Chaos Flames to the Huldra Brothers’ workshop to upgrade your Blades of Chaos.

God of War Ragnarok is available on PS5 and PS4.