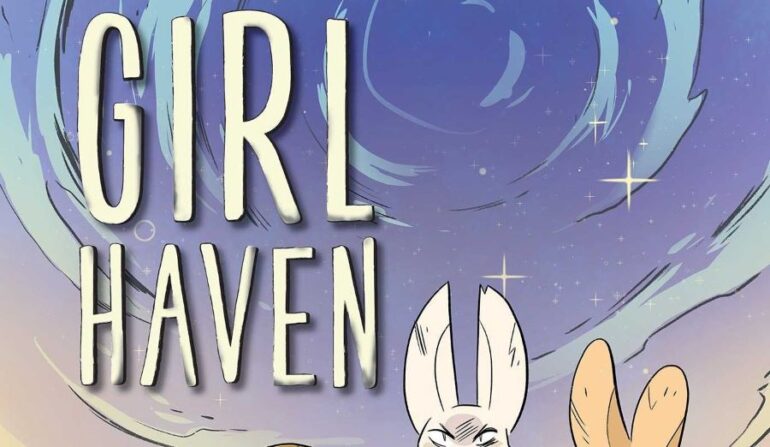 Lilah Sturges kicks off Girl Haven with an author’s note that ends with the words “love is stronger than fear”, and by the end of reading, you realise that sentence is actually the key message of the story as well as a reassuring and empowering message for readers. If you are familiar with Sturges’ previous work – especially Lumberjanes – you will know that the theme is already well embedded in the work we have come to expect from her. Girl Haven is no different.

The story begins with Ash, who is struggling with the mysterious disappearance of their mother several years earlier. Ash is also wrestling with a nebulous gender identity, just out of reach and hard to quantify. When Ash and the Pride Club is swept – via accidental magic spell – into the magical world of Koretris that has only so far existed in Mum’s stories, Ash learns that the world needs saving – and finally begins to understand their own identity too. Back in the real world, everyone has always said that Ash is a boy. But if boys aren’t allowed in Koretris, then what does that mean for Ash? And why are all of Koretris’ residents certain that Ash is the one who was meant to save them?

Girl Haven’s strength – of which there are many – is a commitment to a theme and that is – of course – gender identity. It is front and centre; even as the teens learn they must do battle against the evil force that is blighting the land, the story is ultimately about this question of identity rather than fighting the big bad for the sake of it.

Meaghan Carter’s artwork is full of colour, from page one, and it shouldn’t pass anyone by that the palette is based heavily on the blues and pinks of the trans flag. From the block colours on the opening pages to the backgrounds in Koretris to the clothes worn by characters such as the brilliant Mrs Bixby, the very look of the book itself supports and reinforces the theme.

This extends, of course, into the story. The characters of Eleanor, Chloe and Junebug literally introduce themselves with their pronouns at Ash’s first visit to Pride Club. Through the character of Ash, from the very start, it feels as though Sturges is taking the hand of a young reader and guiding them through the experience of existing as a young, queer person. For the most part, the older characters reflect and reinforce this; from Mrs Bixby, the leader of the rabbits, to Ash’s father, those on the side of good are good in a way that makes Ash feel safe in exploring their own inner turmoil. This is how things should be, an ideal, and Sturges is not afraid to make that clear on the page. In every coming out story, there always seems to be some external person who gets in the way. It is quite refreshing to see that here, the only person getting in Ash’s way is Ash.

But don’t make the mistake of thinking that Girl Haven is in anyway a preachy story. It’s a great read in and of itself, full of bright and vibrant characters. Chloe and Junebug are particularly delightful. Chloe has a jacket emblazoned with ‘feminist killjoy’, and Junebug happens to have everything in their bag they could need just in case they’re ever swept into a fantasy land. Ash’s characterisation suffers a little bit from being the lead and having such inner conflict to deal with, and Eleanor plays the straight woman against Chloe and Junebug’s quirks in a way that sort of makes her a bit forgettable in comparison to them, but not everyone in a fantasy adventure can be Legolas and Gimli. Someone has to be Frodo and Sam, and Ash and Eleanor share some truly touching scenes as she helps Ash explore themselves more deeply.

It isn’t possible to say much about the big bad evil that Ash and the gang have to save Koretris from without spoiling what I think is a pretty sophisticated extension of the gender identity theme, but it ties in beautifully. Not a page in this book feels like it is wasted, or filling time.

Girl Haven is part of a wonderfully queer line-up coming from Oni Press this spring – and if this seriously cute YA graphic novel is a sign of things to come then we are all in for a treat.