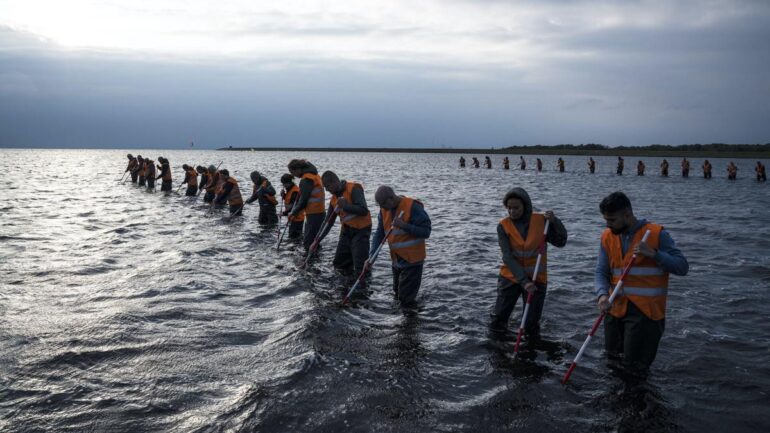 February, tail-end of winter, only really has one thing going for it other than being brief, and that’s Valentine’s Day. Which is something of a booby prize in the era of pandemic. Sure enough, most of the romantic vibes you might get from this month’s television are of the capital-R-Romantic, artistic idealism sort. There is some of the other sort of romance, but that carries its own sting in the tail, as you will see below with the biggest new TV shows of February 2021.

Scandinavian noir is practically a genre of its own at this point – I don’t know, perhaps something about the parts of the world where winter lasts six months lends itself naturally to the dour, cynical stories you tend to get in noir. And the Investigation draws on real dour, cynical events: the murder of journalist Kim Wall, or, as it was known locally in Denmark, ‘the submarine case’.

There’s only so much mystery you can spin out of a murder when the victim was last seen going onto a submarine with one other person. But this isn’t the tack The Investigation takes. Instead, as the title suggests, it focuses exclusively on the investigative work around the murder, rather than the murder itself. One for fans of the locked-room mystery who prefer the locked-room aspect, then. Scandi-noir veteran Søren Malling and Pilou Asbæk lead the cast.

2. Crime Scene: The Vanishing at the Cecil Hotel | February 10

This is Netflix’s latest true crime documentary, and when I say ‘latest’ I mean another entry on a long, long list – so how can this one stick out from the crowd? The gimmick here is to not focus on a specific murder, or even a specific murderer, but to feature a specific locale where some heinous acts went down.

In a way, they’ve accidentally made a better version of those tedious ‘ghost hunter’ shows. That genre always makes a great deal of the idea that once upon a time bad things happened in their location-of-the-week, then undercuts this more interesting content by spending most of the time fumbling about in the dark looking for ghosts. (Fun fact! None of those shows has ever found one.) Crime Scene takes that format and removes the obvious hokum.

This instalment looks into the grisly history of Los Angeles’ Cecil Hotel – which is still open and operating today, although likely won’t appreciate the publicity. In its time it has been home to two separate serial killers, and witnessed at least sixteen suspicious deaths, so it has something of a reputation. Even changing its name couldn’t take the curse off, and as recently as 2013 a body turned up in the water tank. Two stars, not my best night’s sleep.

Bob’s Burgers has been running since 2011, and remains one of the more robust animated comedies out there, simply by virtue of being able to stick to a coherent plot and having a creative direction that’s not ‘pointlessly edgy’. So, really, why not reuse the same blueprint? It’s that or cede ground to the shambling, festering corpse of The Simpsons.

Instead of H. John Benjamin, the father here is played by Nick Offerman, best known as the pretend conservative from Parks And Recreation. Yes, they’ve got a father with a distinctive voice who has a brood of three children, the youngest of which wears a weird animal hat, they’re not even pretending to leave their comfort zone.

Fox has already put out two episodes of The Great North as a sneak preview, and the overwhelming consensus is that it’s pretty much Bob’s Burgers transplanted to Alaska. But, again, that’s no bad thing. Its sort of gentle, family-focused, mildly surreal sitcom hasn’t run out of steam yet.

Dwayne T. R. Johnson – probably the best example of a wrestler making the leap to being a more general media star, and best known recently for playing a Polynesian demigod in Moana – has his own go at telling the fictionalised story of his own early life, in the vein of Everybody Hates Chris.

Honestly, Johnson is probably the wrestling world’s best choice for something like this – he’s a good-natured, charismatic guy, who hasn’t gone too far and become a meme like John Cena, or Hulk Hogan before him. This isn’t to say Johnson can’t get larger-than-life in the same way, though. The central conceit is that the show is him looking back on his life and times ahead of his 2032 run for President. Could still happen, although he would only be the second President to be a veteran of the WWE.

I’ve credited Russell T. Davies before as being ‘Britain’s undisputed master of gay media’, a category in which I include Doctor Who. So now he’s turning his hand to a drama about five gay men living through the 1980s and the height of the AIDS crisis, any thought of it being predictable subject matter must be leavened with surprise that he hasn’t covered this already.

As much as this is a period piece about free-marketeering London, it’s also got shades of Davies’s last big project, the uncomfortably prescient Years And Years, about it. The retro setting is just that, a setting – the meat of the show is in following a group of people through a period of time. It’s about characters and personalities, it’s not one of those historical pieces where you make reference to something that’s going to happen, and so look clever and witty without actually being either.

Perhaps settling into his position at the top of his particular tree, Davies has brought some big names into the cast: Stephen Fry, Keeley Hawes, and Neil Patrick Harris, who unusually is actually playing a gay man rather than an unstoppable hetero-sex machine. The show’s already out in the UK, and has been greeted as ‘a masterpiece’.