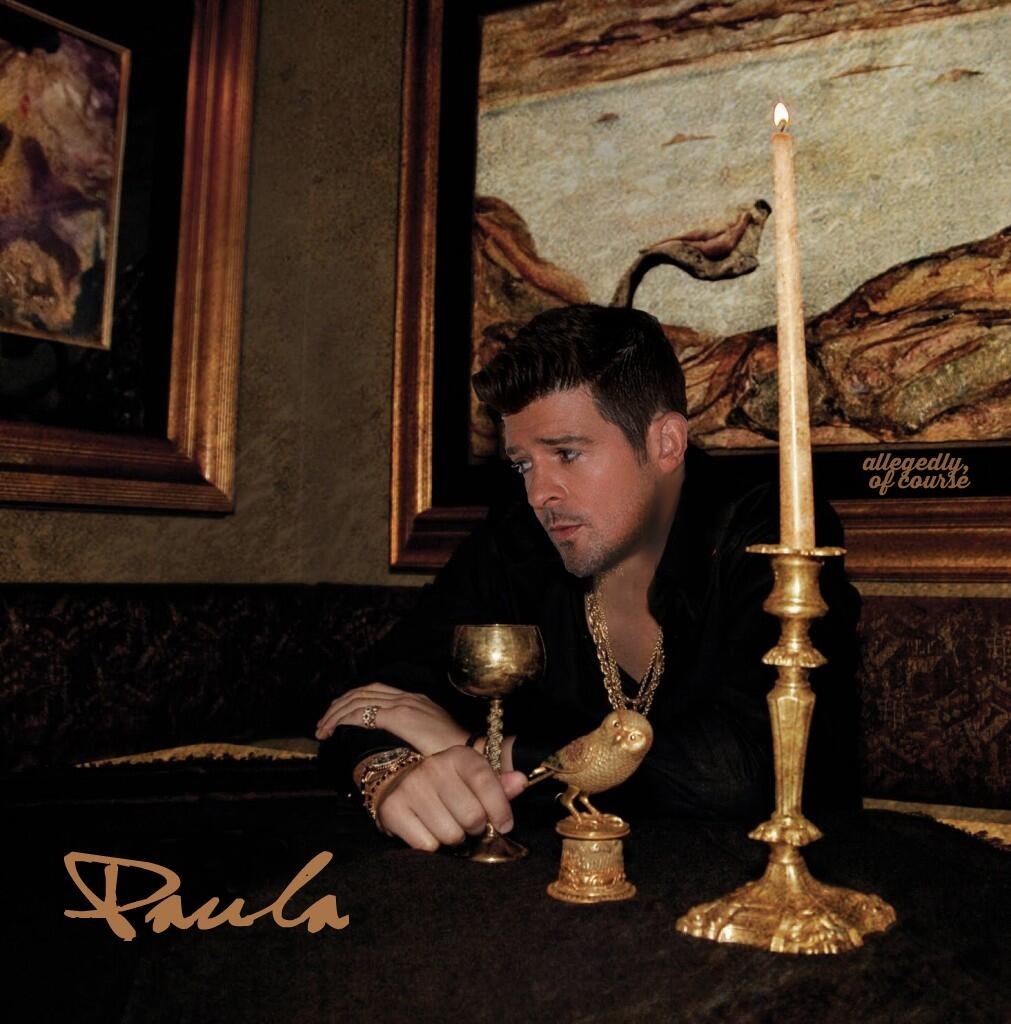 No one likes you, mate.

Today my faith in humanity has been restored. Life is good, the world is a beautiful place and it turns out people CAN be trusted to make the right decision from time to time. Today will be remembered as one of the most important dates in history: decades from now, people will still ask each other “where were YOU when you heard about Robin Thicke’s first week album sales?” The response, inevitably, will be “on the internet, laughing my arse off” but people will carry on asking anyway, simply as an excuse to relive the memory of this glorious day.

It’s now been a week since Robin released his seventh (SEVENTH!) studio album. Paula has received a lot of attention in the build up to its release, as it seems to be a grandiose attempt to win back his wife Paula Patton, who came to her senses earlier this year and threw in the towel after 20 long years. With several gold- and platinum-selling albums under his sleazelly-weaselly little belt, you could only expect this sort of publicity to bolster his selling power. Well, if you did expect that, I’m afraid you’d be wrong.

The UK sales figures were published today and, make ready the drumroll…Paula has sold…530 copies.

I’m no mathematician but…that number seems a little low to me. Was there some sort of shipping error? Did they accidentally only send the album to one branch of HMV way out in the Orkney Islands? Do you remember Adam Rickitt, Robin? Probably not. He was in Coronation Street for a while in the 90s and then they let him do an album and it tanked and he was never really seen again. Anyway, Adam Rickitt’s career-ending album charted 159 places higher than yours. Just saying. You were so popular last year Robin. How did this happen? Where did it all go wrong?

I have an idea: Robin Thicke is where it all went wrong. Sure, he did well last year with that song that may or may not have been advocating rape culture (it was) but really, very little of that success can be attributed to him. With a track that may or may not have been ripping off a Marvin Gaye song (it was) and significant contributions from so-hot-right-now Pharrell and T.I, Thicke could have been any old twat waving alphabet balloons around and the song still would have taken off. As the old saying goes, you can drape lots of sexy naked ladies on a turd, but it’s still a turd.

I’ve had the displeasure of listening to Paula twice this evening and, well…it’s shit. I don’t say this because I dislike Robin Thicke and want to tear him down. I do, but there are so many other ways to do that. I have integrity. From a purely musical point of view, Paula is shit. The lead single “Get Her Back” is so mind-numbingly insipid that frankly I struggle to understand how he even made it to 530 sales. And the rest of it is just a hot mess. Genres flying all over the place, overly-theatrical backing vocals, absurdly cliched lyrics. There were no less than three occasions when something on this album made me laugh out loud. Listen to “Something Bad” and tell me you’ve ever heard a more aptly-named song.

“Blurred Lines” did well because even though the content was suspect, the music itself was so infuriatingly catchy that even if you hated him and it, you could still find yourself dancing to it after a few too many. With Paula, Thicke seems to be relying wholly on the message of the album, which in itself is kind of troubling. The fact that he sees this album as a grand romantic gesture to win back his wife just emphasises the kind of problematic colossaprick he is.

Let me paint you a picture. You’re in a shitty relationship, you break it off. The person calls you relentlessly for weeks and months, calling you awful names, telling you they still love you, telling you they’ve taken an overdose and it’s your fault because they don’t want to live without you. Meanwhile, they’re going around telling all your friends and family that it’s just temporary and you’re working things out. You’re just overreacting, they know you still love them and they’re willing to wait. FOREVER. This album plays that scenario out against a backing track of uninspired porn music.

The lyrical content of Paula really isn’t much different from the scene I just created for you, and that’s pretty terrifying. If I were Paula and I listened to this album I would be applying for a restraining order and sleeping with something sharp or heavy under my pillow.

Luckily. the numbers suggest it’s statistically very unlikely that she’s listened to it yet. Or anyone else, for that matter.