Forza Horizon 5: Hot Wheels Is Great For Racing, Not Exploration

Trying to stay on track. 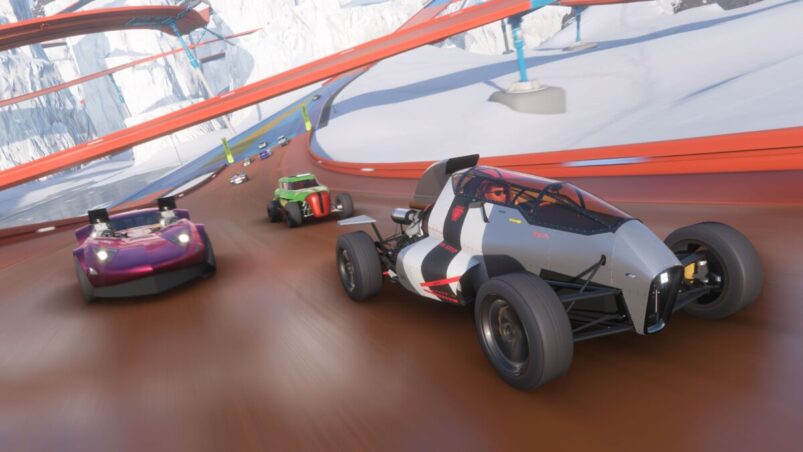 The Forza Horizon series is widely considered to be one of, if not the best active racing game series on the market, with Forza Horizon 5 sitting at the pinnacle of the entire genre. The gameplay, content and open world design all coalesce to create a simply unmatched racing game, so the announcement of a Hot Wheels expansion was an exciting one indeed.

Sure, veteran players might think this DLC is unoriginal due to the fact that Hot Wheels was already featured as DLC for Forza Horizon 3, but that collaboration was widely regarded as one of the best parts about the third game. Other players might not be as hyped about this iteration considering the last version has been nuked from the store, thanks to Forza’s usual “End Of Life” sunsetting program. It’s still a load of crap, by the way, as it’s kind of hard to get excited about something when it can just disappear arbitrarily a few years down the line.

Concerns about preservation aside, Forza Horizon 5’s Hot Wheels expansion takes the exemplary racing action that the series has become known for and turns it up to 11. In true Hot Wheels fashion, the races are bigger, faster and ultimately sillier than they are in the base game, and it’s arguably all the better for it. Racing around the huge tracks showcased in the Hot Wheels Park is nothing short of exhilarating.

From a pure spectacle standpoint, the Hot Wheels expansion is astonishing. The world itself is exciting and varied, as you move from three unique biomes: a forest, a desert canyon and an ice mountain with a volcano in the center. Yes, you can drive a car sideways around the vent of the volcano, and it’s as awesome as it sounds, while the various boost pads, air jets and water flumes ensure there’s excitement in every single section of the map.

As for the racing itself, Playground Games has ensured that the physics engine of Forza Horizon 5 could properly handle the ludicrous megatracks of Hot Wheels. Speed, g-force and other factors are more important during Hot Wheels races than ever before, given how you spend the majority of your time laughing in the face of gravity. Going too slow or making the wrong turn during these gravity defying sections is practically a one way trip into oblivion. Certain sections of track are magnetised so you don’t fall if you go too slow, but other portions of the track are a bit more precarious.

Like the regular Forza Horizon 5, players can explore the Hot Wheels Park, complete races or player created events, complete stunt challenges like speed traps, danger zone jumps and drift zones and smash bonus boards for XP. Unlike the base game, progression through the Hot Wheels DLC is a lot more linear, as you complete events and challenges to earn Hot Wheels Medals.

Doing so lets you progress from using B class cars, through to A, S1, S2 and X class cars. Yes, you’re unable to use your X class supercar immediately with the Hot Wheels DLC, which might be a bit of a bummer for some players, but the cars you receive from completing the DLC’s events, along with the tracks themselves, more than make up for that. Basically, you’ll still be going 200mph from the get go, with the pace only getting faster as you progress.

From a pure racing standpoint, Forza Horizon 5: Hot Wheels is an amazing experience, with the tracks and sense of speed proving to be more exhilarating than even the regular Forza Horizon 5 experience. However, while the racing is great, exploring the actual world of Hot Wheels Park isn’t quite so satisfying. The open world exploration that defines the Forza Horizon series just doesn’t hit the right notes.

The entire park is mostly oversized Hot Wheels tracks, but the majority of the tracks have barriers on either side, so it can make freeform exploration feel a bit more annoying than it normally would. Normally, you’d drive down a road, see a bonus board appear on the map and stop to grab it, but most of the time with the Hot Wheels Park, you have to drive 1km either forwards or backwards to find an off-ramp, then circle back to grab your collectible. For me, it ruins the natural curiosity of exploring a new world.

Navigating the park can also be somewhat confusing as the Hot Wheels tracks can look like an interconnected web of roads that’d make Spaghetti Junction seem comprehensible. Trying to use the map or mini-map to navigate the different roads when so many overlap and intersect can make following where you need to go more difficult than it needs to me, even if you’re using the GPS tracker.

The exploration flaws are only a somewhat minor gripe, considering that the races themselves are some of the best that Forza Horizon 5 has to offer, and the expansion even includes various Hot Wheels pieces for players to create their own events too. Forza Horizon 5: Hot Wheels already feels like a massive and enjoyable expansion, and hopefully the player-created content will mean there’s even more to look forward to while we wait for the game’s second expansion.