Home
Gaming
Football Manager 2022: How To Stop Getting So Many Injuries
Gaming Tips & Guides
·3 min read

Football Manager 2022: How To Stop Getting So Many Injuries 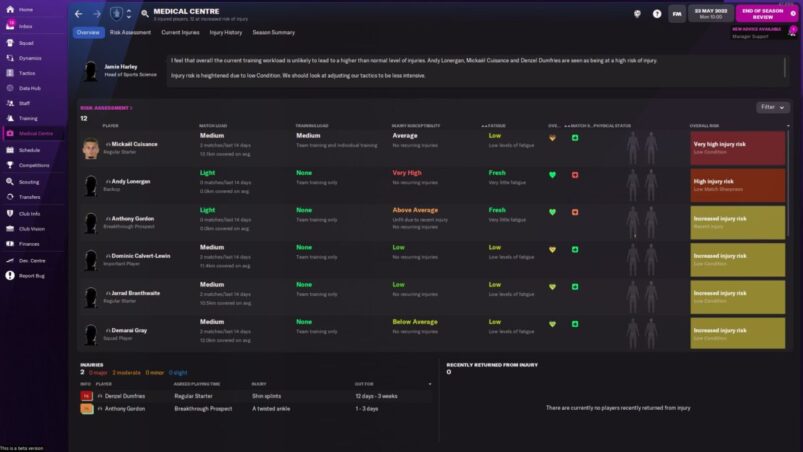 Injuries are the bane of every football team in the world, with even short layoff scuppering the best laid plans. Many Football Manager players know exactly how frustrating injuries can be, especially in Football Manager 2022.

Seemingly as a reaction to the overpowered nature of certain tactics in the previous game, Sports Interactive appear to have made injuries more of a common thing in Football Manager 2022. Squads can no longer hound and harry like Liverpool no matter who they are and now have to pick and choose their moments. But there are other things you can do to limit the amount of injuries you get in the game too.

Here’s how you can stop getting so many injuries in FM 22.

Stop Pressing Every Second Of Every Match

Gegenpressing gets a much needed nerf in Football Manager 2022 in that your players now cannot press all game, every game and not feel the physical effects of it.

If you are triggering presses as frequently as possible, your team will likely be out on their feet halfway through the second half. The more tired your players are, the more likely they are to pick up injuries.

Instead of relentlessly pressing this year, it’s recommended that you pick and choose your moments using match plans to make your players press when they’re losing or just during certain periods of the match.

Make sure you’re using your subs and swapping out really tired players before a match to make sure they last the distance. While it might be frustrating to not be able to use your best players every single match, one missed match is better than dozens.

Use Your Risk Assessment

An oft-overlooked facet of the Medical Centre is the Risk Assessment, which tells you just how at risk a player is of getting injured. Unless you’re a gambling man, you should really take into account that some of your players are at risk.

If you notice that a player is at a super very high risk of injury, either take them off early or bring them on late to get them involved while limiting their risk of getting injured. You can also check their workload, which brings us to the next tip.

Sometimes your staff can be very dumb and seem like they’re trying to kill your players, which is sometimes why it’s always worth just double-checking how they handle at risk players when it comes to training.

Check the risk assessment to see if any high injury risk players are training on too high an intensity then tweak as you see fit to reduce their load.

Invest In Staff and Facilities

Speaking of staff, the best staff and the best facilities will often yield the least injuries. Not only will generally having more staff mean that you are able to help injuries heal better, but the most adept staff limit the chance of injuries to begin with.

A good physio will help a player come back from injury quicker and also have a much better idea of what kind of training load to give them. While not applicable for every team out there, sometimes the best investment you can make is on your staff rather than that nineteenth wonderkid.

A common mistake that we’ve all made at least once: Make sure that your players aren’t made available for your developmental teams for any longer than they need to be when building fitness.

While good for building fitness at the start of the season, it’s really not wise in the middle of a congested season to make senior players available for the under-23s as it can not only make them more tired, it can also lead to fixture clashes.

Sometimes players just get injured and there is nothing you can do about it. The numbers the game constantly crunch in the background have decided that your player is going to be smote down and that’s all there is to it.

When my brand new signing got injured 1 (one) minute of making his debut for several months, it sucked, but it’s also football and football is often unfair. The sport wouldn’t be much fun without any drama.

READ NEXT: Football Manager 2022: How To Score From Corners