Football Manager 2022: How To Score From Corners

Head the ball, score the goal. 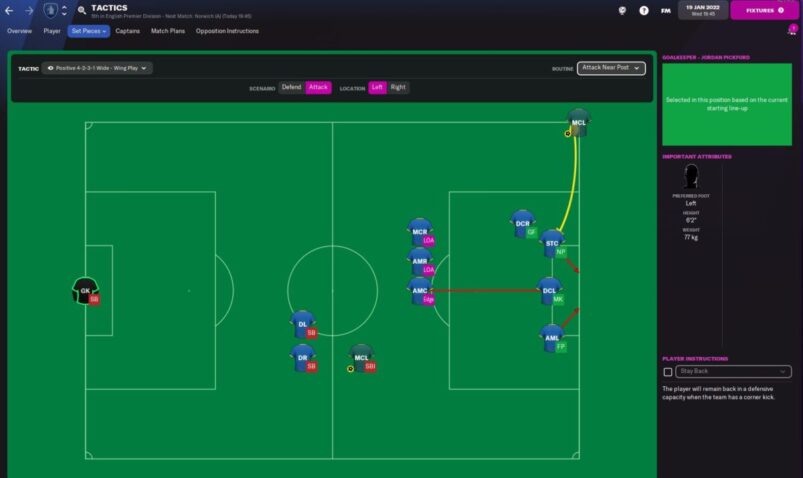 Football Manager 2022 is the deepest football sim out there, a game that allows you to build your own footballing dynasty playing the brand of football that you want. But there’s nothing wrong with channelling your inner Pulis and trying to score more from corners.

Set pieces are often overlooked by Football Manager fans, with a lot of people just going with whatever the default setup is. While you may get the occasional goal without even trying, you really ought to practice set pieces and set your own routines in FM 2022.

We’ve played a couple of seasons in Football Manager 2022 and have found a couple of routines that have really helped us to rack up quite a few goals already. Bear in mind that whoever attacks the ball should probably be your tallest player and also the one with the best heading attributes, and whoever takes the corner should have the highest corners attribute.

You’ll notice right away that these corner tactics aren’t at all complicated, and that’s because they don’t need to be.

With this routine, simply set your best header of the ball to attack the near post, then also put someone on the back post. Instruct your corner taker to aim for the near post and you should see a lot more attacks.

This routine works because the near post is the least congested area of the 6 yard box and is usually open for an attacker to make a late dash into. Having someone on the far post also increases the chances of someone turning in a flick-on.

An underrated corner tactic from last year makes its return in FM 2022: playing it short.

This tactic is very straightforward, just set player instructions to short on your corner taker and then have a good crosser of the ball come short for the ball. This player will then dribble and cross the ball in from an even better position.

As other football games prove, taking short corners can really jar opposition defences, especially in man to man marking. You want your player who’s come short to be a good crosser of the ball and then make sure you’re setting your best headers of the ball to either be in the center or attack either post.

This corner tactic in FM 2022 works because it disrupts the man marking and allows for a new phase of play while also helping you to maintain possession.

As with all corner tactics, these aren’t going to help you score a goal every game as that would just be realistic. You should also make sure to switch between your routines, otherwise the AI will just pick up on what you’re doing.

Football Manager 2022 is available now on PC and Xbox.

READ NEXT: Football Manager 2022: How To Change Height