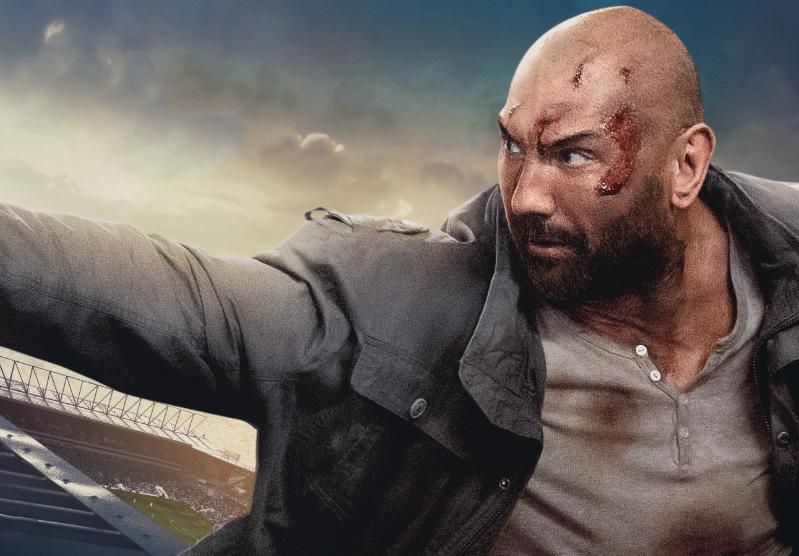 The best way to describe Final Score would be ‘Die Hard in a football stadium’. Make no mistake, this is a film which wears its influences on its sleeve, to the point where aside from the basic premise of the combat savvy protagonist having to infiltrate a locked down structure seized by terrorists, it even ‘borrowed’ two key plot elements form Die Hard. Namely, the hero dropping a body from a height to alert the authorities of the situation, and the hero using a handheld radio to communicate with a police officer on the outside at regular intervals.

Bautista stars as Michael Knox, a tough as nails US veteran who comes to the UK to check in on the family of his best friend, who was killed in action. With his musclebound body and his no-nonsense attitude, Knox is certainly not an individual to to trifled with, although most of the fight sequences were so rapidly cut together that it was hard to tell if he was punching his enemies or editing them to death.

Aside from the sloppy action sequences, there is no denying that Bautista is an actor with a great deal of natural charisma and talent, and while his role in Final Score lacks the humor that made his portrayal of Drax in the Guardians of the Galaxy movies so memorable, he is perfectly adequate in the role of a reluctant savior desperately trying to rescue his niece from terrorists and to prevent a political crisis in the process. The leader of the terrorists is played by Ray Stevenson, who is also on top form despite his occasionally wonky accent.

Because every onscreen tough guy needs to have a comedic sidekick, Amit Shah appears as Faisal, a shy and socially awkward employee at the stadium who unwillingly gets caught up in the madness. In terms of personality, Faisal is the polar opposite of Knox, and the back and forth between the two characters will surely bring a smile to your face. The same can not be said for the fact that many of the characters in the film mistake Faisal for a terrorist because of his ethnicity, because it’s too late in the day to find humor in stereotyping.

Pierce Brosnan is arguably the biggest name on display here, which is why it seems strange that aside from delivering a speech about his favorite chicken from when he lived on a farm (no, really), he is given very little to do. It probably won’t be much of an assumption to say that he was only here to collect his paycheck, but most viewers would probably be happy to hear Brosnan talk about chickens all day as long as we never have to listen to his singing from Mamma Mia! ever again.

Director Scott Mann, who you probably know from The Tournament, evidently has a talent for fast-paced adrenaline-fueled action, because the majority of Final Score takes place while a football match is going on in the stadium, and from the moment of kickoff, the tension never ceases to rise. While there are some unbelievable moments, such as Bautista driving a motorbike through the roof at top speed and somehow not being noticed by the crowd, there is still a lot of fun to be had here if you try not to think too hard.

So Final Score clearly does not offer a great deal in the way of originality, but having said that, the film is still recommended viewing, because where else are you going to see Dave Bautista swinging like Tarzan from a giant football banner? If you still haven’t decided whether or not to see Final Score, just keep one thing in mind. This is a film where an American was punched in the face for referring to football as soccer. That alone should tell you if it will be something you’ll enjoy.

Verdict
Despite its unbelievable plot and sloppily-edited fight sequences, Dave Bautista's impressive performance as a tough guy with a heart was enough to make Final Score worth viewing at least once.
6
Cultured Vultures is a pop culture website established in 2013 covering all things gaming, movies, and more. We eat your words.
All The News On The Biggest Games