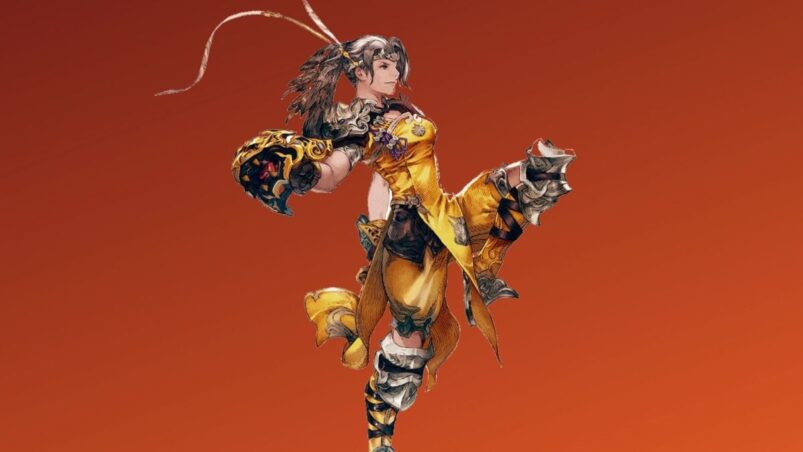 The Monk is a DPS class available in Final Fantasy XIV, a melee fighter who battles their way to victory by unleashing a flurry of kicks and punches. Their playstyle focuses heavily on positioning and fast combo attacks, while also being right in the thick of the action.

While critically overpopulated, DPS roles have some of the most interesting playstyles, with the added bonus of causing some serious damage to foes. The Monk definitely fits this purpose, having the potential to cause utter mayhem on the playing field.

However, compared to most other DPS jobs in Final Fantasy XIV, Monks can be a little difficult to get the hang of as they have a pretty steep learning curve.

If you’re thinking of picking up the Monk job in Final Fantasy XIV, here are the basics of what you need to know to become a master of martial arts.

You can unlock the Monk as a job in Final Fantasy XIV after leveling a Pugilist to level 30. They are a disciple of war, which refers to physical damage type classes and jobs that specialize in weaponskills as their main offensive abilities.

The job is very fast-paced and requires a great deal of positioning. Monks predominantly use fist weapons, dealing damage to foes by kicking and punching.

As a Monk, you’ll be primarily making use of striking gear, light strength-based DPS melee equipment. Pugilists, on the other hand, wear leather armor.

The Monk’s playstyle involves quick physical-based combos, which allows them to unlock their inner chakra to unleash even more damage.

How to Become a Monk In Final Fantasy XIV

The Monk job isn’t available from the get-go – you’ll first need to level up a Pugilist to 30. After doing so, complete the L30 PGL class quest, “Return of the Holyfist”. You’ll find the quest giver, Hamon, at Ul’dah – Steps of Nald, Thanalan.

Make sure you’ve completed the “Sylph-management” quest too.

Once you’ve finished “Return of the Holyfist ”, you’ll unlock the quest that allows you to unlock the Monk job, “Brother from Another Mother”. Go to Gagaruna in the Pugilist’s Guild at Ul’dah – Steps of Thal.

Upon completing the quest, equip the “Soul of the Monk” to officially become a Monk.

The playstyle of a Monk is extremely fast-paced, requiring you to deal out quick attacks and keep a close eye on timers, as well as your positioning. Out of all the DPS jobs, Monk is by far the most hectic, which can seem a little overwhelming at first.

The job has a steep learning curve as you’ll have to memorize specific rotations and positions (flank or rear) to truly be effective. Compared to other DPS classes, Monk is probably one of the least friendly to new players.

That said, once you’ve got to grips with the basics of the Monk job, it’s no harder to play than other classes.

In addition to positioning, you’ll need to manage your stacks of Greased Lightning, which increases both your attack speed and damage. Monks have a relatively high damage output, as well as the shortest GCD (global cooldown) out of all the classes due to their Greased Lightning buff.

They also bring a good amount of utility to Raids due to their party buffs, such as Mantra. This ability increases HP recovery through healing actions by 10% for yourself and nearby party members.

Additionally, their Brotherhood ability increases damage by 5% to all closeby party members. As a result, Monks complement other physical damage dealers, enhancing their performance while doing a hefty amount of damage themselves.

If you enjoy strategic gameplay that is quick, challenging, and with a focus on martial arts, the Monk job could be your true calling.

Monks have a lot of actions you’ll need to memorize to ensure you deal the most amount of damage possible. They all have short cooldowns, which allows you to hit a series of attacks in quick succession.

While the amount of actions and rotations you need to remember can seem quite daunting at first, once you get into the swing of things, selecting the right ones for maximum damage will become second nature.

Bootshine
Unleashes an attack with a 200 potency.

True Strike
Unleashes an attack with a potency of 270, or 300 when performed from an enemy’s rear.

Snap Punch
Unleashes an attack with a potency of 270, or 300 when performed from an enemy’s flank.

Fists of Earth
Reduces the damage you take by 10%.

Twin Snakes
Unleashes an attack with a potency of 240, or 260 when performed from an enemy’s flank.

Arm of the Destroyer
Unleashes an attack with a potency of 110 to all enemies close by.

Demolish
Unleashes an attack with a potency of 80, or 110 when performed from an enemy’s rear.

Rockbreaker
Unleashes an attack with a potency of 150 to all enemies close by.

Shoulder Tackle
Rushes the enemy and unleashes an attack with a potency of 100.

Fists of Fire
Increases your damage by 10%.

Mantra
Increases HP recovery when using healing actions by 10% for yourself and all closeby party members.

Four-point Fury
Unleashes an attack with a potency of 140 to all close-by enemies.

Perfect Balance
Applies 6 stacks of Perfect Balance, with each stack allowing the execution of weaponskill that needs a specific form without being in that form.

Dragon Kick
Unleashes an attack with a potency of 230, or 260 when performed at the enemy’s flank.

Form Shift
Applies Formless Shift to self, allowing you to use a weaponskill that requires a specific form without being in that form.

Meditation
Opens up a Chakra. Up to 5 can be opened at once.

The Forbidden Chakra
Unleashes an attack with a potency of 340.

Elixir Field
Unleashes an attack with a potency of 250 to all close-by enemies.

Tornado Kick
Unleashes an attack with a potency of 400.

Riddle of Earth
Applies 6 stacks of Riddle of Earth, with each stack reducing the damage you take by 10% and negating all action direction requirements.

Riddle of Fire
Increases your damage by 25%.

Enlightenment
Unleashes an attack with a potency of 220 to all enemies in a straight line in front of you.

Anatman
Increases the duration of Twin Snakes and your current form to maximum, while also stopping their expiration.

Six-sided Star
Unleashes an attack with a potency of 540.

Before you start your Monk journey in Final Fantasy XIV, here are a few tips to help you get the most out of your gameplay and, more importantly, be as destructive and menacing to your enemies as possible.

Apply Leaden Fist first
Using this buff transforms Bootshine from a mediocre opening attack to a potent hard-hitter, even more so when you deal damage from the rear.

Keep on top of your Greased Lightning stacks
Greased Lightning can be stacked up to three times, or four if in Fists of Wind mode. With each stack, your cooldowns are reduced and your damage is increased.

Unfortunately, if you let the timer of Greased Lightning run out, you’ll lose each stack.

Always keep Demolish on your main target
This ability applies damage over time to a target, so it’s essentially free chip damage while you prioritize more direct attacks.

Always keep your GCDs rolling
Staying on top of your global cooldowns is a large part of playing Monk effectively, ensuring you deal maximum DPS.

Try to read up on encounters before attempting them
While this tip can be applied to any class in Final Fantasy XIV, it’s especially important for the Monk job due to its focus on positioning and cooldown management.

Understanding the basics of an encounter is helpful for knowing what to expect from bosses – how they move, what abilities they use, and the number of phases they have, etc.

As a result, you’ll have a better idea of where to position yourself and the best rotations to use to take the boss down as quickly as possible.