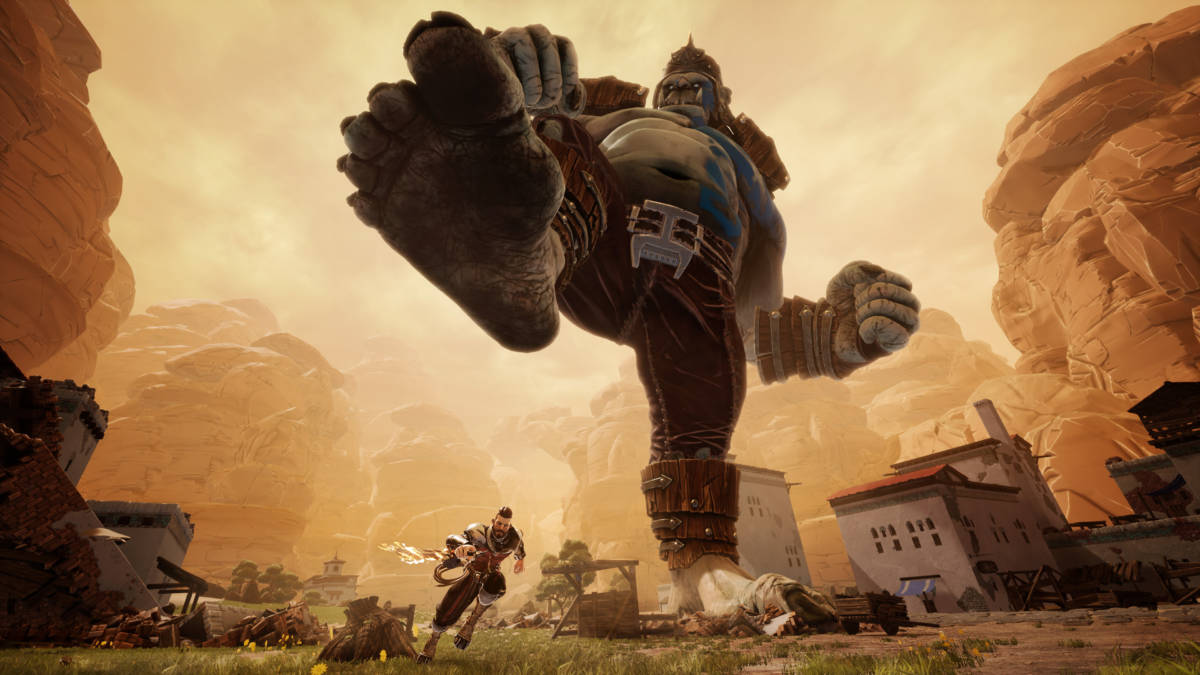 Oh boy, this one is disappointing. I had high hopes for Extinction, hopes about as high as the Ravenii that are plaguing its world. On paper, Extinction looked to blend the swordplay of games like Devil May Cry or God of War, with colossal enemies from the likes of Shadow of the Colossus and Attack on Titan. Unfortunately, the resulting game is less than the sum of its parts.

You control Avil, who is the last living Sentinel trying to protect humanity from the Ravenii; giant ogre like creatures intent on destroying everything in their path. It’s a fight that Avil and his partner Xandra are losing, badly. In a last ditch effort to survive the ravenous hordes, an alliance is formed with King Yarrow, and together they try and plan a way to turn the tide of war.

Whilst Xandra and Yarrow serve as nothing more than voices in your head offering up exposition and inane banter, Avil takes the fight to the Ravenii and their more human sized allies, the Jackals. Each mission contains one of several objectives, such as kill so many enemies, rescue so many civilians or protect key watchtowers. We’ll get to those towers in a minute.

No matter what the objective is, gameplay is broken up into three key aspects; combat, traversal and Ravenii battles, and none of them live up to the potential put forward by the game’s premise. The combat with the Jackals is a bland, button mashing affair, requiring you to mash square until the bad things fall over, as it’s the only attack in the game. There are extra combos depending on when you press square, but it can’t rescue the combat from feeling tedious.

Other than missions that specifically require you to kill Jackals, the only reason to actually engage with the combat is to protect civilians. These innocent bystanders are conveniently congregated next to portals scattered throughout each level, and rescuing them requires holding triangle for a few seconds. The funny thing is, even if you’re surrounded by Jackals, most civilians can be extracted without too much fuss, making the combat mostly redundant. 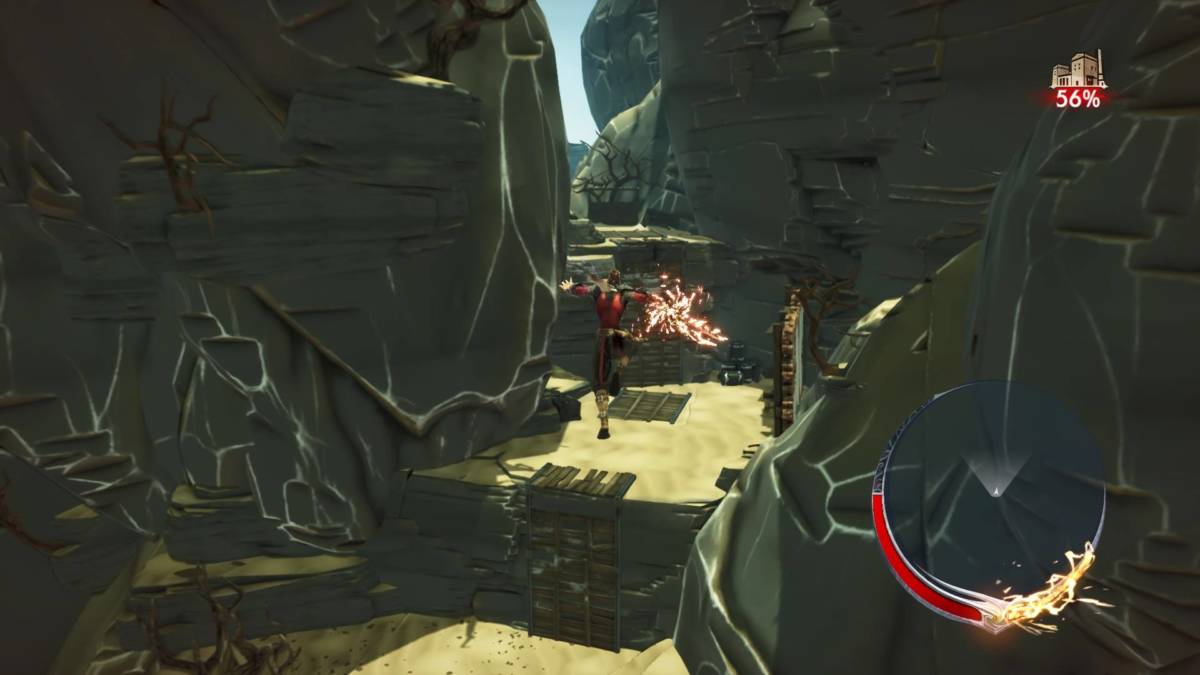 The parkour/traversal aspect of the game isn’t that much better. It often feels unresponsive, as you frantically tap the jump button to hop your way up the side of the wall only to tumble back down to the ground. Avil is certainly agile, which would ordinarily be a tick in the pro column, but it’s often difficult to actually control him in the way you’d like. Trying to navigate tight streets with Avil can be much more testing than it really should be.

Things do improve once Avil takes to the skies, as he can grapple to certain points using his whip whilst automatically bouncing along trees and rooftops to keep his momentum going. He also has an air dash and glide to really get some distance. Navigating the levels can suffer from certain contrivances, such as Avil only being able to climb on wooden ledges, so when the level opens up and you’re free to explore and tackle the Ravenii, it’s an improvement.

That being said, you still have to tackle the Titans–I mean, Ravenii, and that can be a huge pain in the ass. Like Attack on Titan, Ravenii can be killed by severing the back of their neck, and the best way to get there is by chopping off limbs to immobilise the giant before going in for the kill. At its most fluid, you’ll be using Avil’s Rune Strike to take out the big guy’s leg before clambering up their back and beheading the bastard.

Fighting your first few Ravenii is when Extinction is at its best, as you’re overwhelmed by the sheer size of these absolute units. Unfortunately, once you get into the swing of things, fighting Ravenii can feel like routine. It becomes as tedious as the rest of the game, and even though Extinction adds additional armour types to the Ravenii to change up your strategy, all it does is just prolong the same outcome. 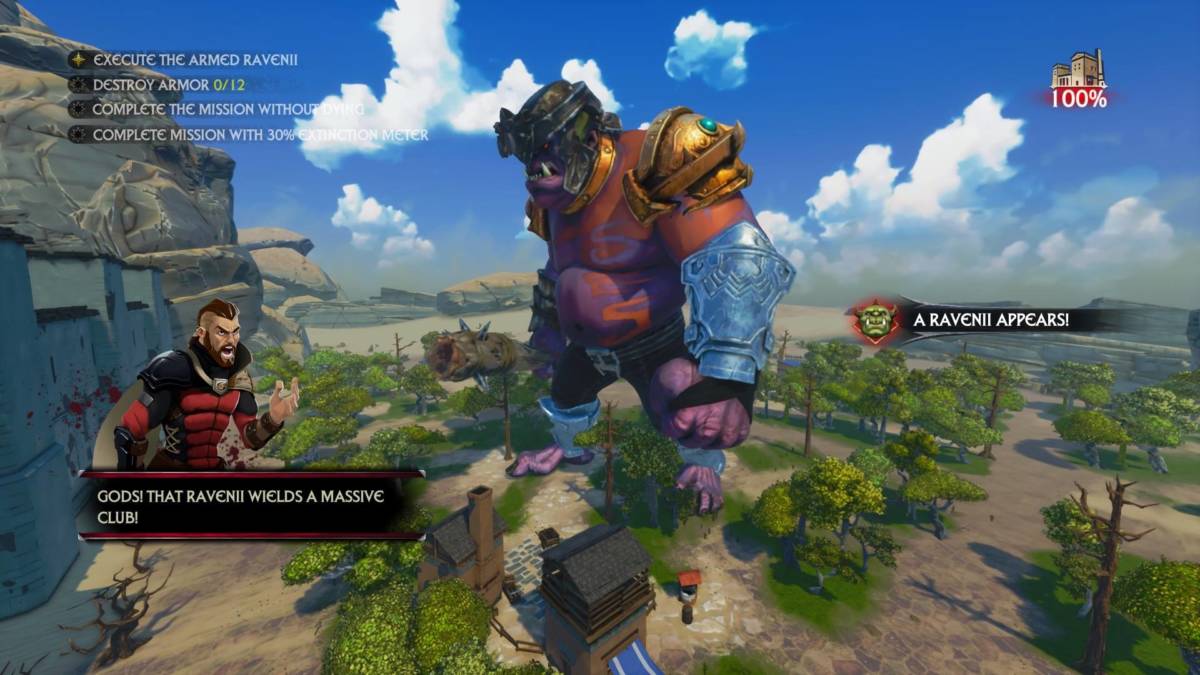 But even getting to the execution can feel like too much hassle. Climbing a Ravenii can sometimes feel like a herculean task caused not by how difficult the Ravenii are to kill, but how wall jumps and wall runs can sometimes cause Avil to climb endlessly into the monster’s armpits, or groin.

Though you can chop their legs off and scale their back like it ain’t no thing, different Ravenii can have different armour configurations, and if they possess Brightsteel leg armour, you’re screwed because Avil can’t destroy it. If the Ravenii is wearing a belt with a pouch on it, you can just grapple up to it and climb up from there. If not, prepare to get angry.

The environment is also a big factor in fighting Ravenii. In a city with plenty of tall buildings, scaling the massive monsters is much easier, but there’s plenty of levels that take place on flatlands with very little in the way of architecture. It’s hard to get vertical when you’re not being given to tools to get there in the first place.

The key problem, in a game with plenty of problems to begin with, is that a large portion of the campaign missions are procedurally generated. The layout of the levels, the buildings that occupy it, the Ravenii that spawn in and the armour they wear are all dictated randomly before the level even begins, which can turn a frustrating game into something much worse.

For every possibility of a “save the citizens” level where they’re all grouped up in one area to make things easier, you’ve got a mission to kill Ravenii on a relatively flat tile set with no mobility options. Though there’s plenty of 2D games that utilise procedural generation to create levels, using it in a 3D space is strange. There are too many variables at play, meaning that it often creates experiences that lean too heavy on either side of the difficulty spectrum. They’re either too easy or too hard, there’s no middle ground. 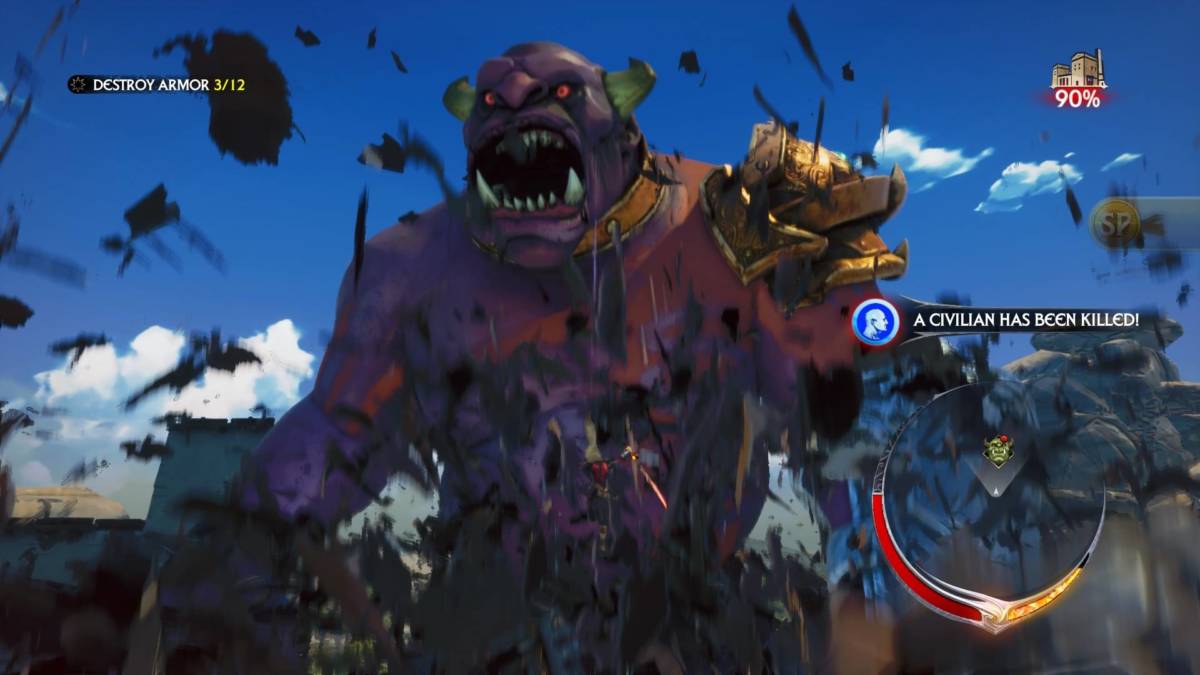 The watchtower defense missions can be particularly contentious. You have to protect key buildings from Ravenii attacks, but you’re completely at the mercy of the RNG gods. If the game decides to have all the towers spread apart, and the Ravenii spawn nearby, you’re done for. You can only spin so many plates, yet Extinction feels compelled to ask the impossible of you. Avil can only be in one place at one time, yet these missions require a zen like mastery of a clumsily handled game.

It was those missions that forced me to tapout on Extinction. There were so many issues with this game, including a dodgy camera that doesn’t allow you to see a Ravenii’s attacks, which can insta-kill Avil, along with a UI and gameplay structure that felt more like a budget game than a full price title, but the awful procedural generation was the killer.

At the very least, not every mission is procedurally generated. The levels that the developers came up with allow the game to show a little bit more focus and try to present the game in its best form, but it’s still a disappointing experience. They’re an improvement over the random levels in the same way that being stabbed once is better than being stabbed twice. If you like swordplay and fighting giant monsters, avoid this game. You’ll find your love tested.

Speaking of games about murdering giant monsters, check out our review of Attack on Titan 2, which we much preferred over this game.

Verdict
Extinction wants to be a variety of different games, and fucks up with every single one. A haphazard gathering of multiple genres, Extinction fails to develop the multiple aspects of itself, leaving behind a game that’s underwhelming at best and frustrating at worst. Microtransactions: Nope.
4
Cultured Vultures is a pop culture website established in 2013 covering all things gaming, movies, and more. We eat your words.
All The News On Your Favourite Games