Attack On Titan 2 (PS4) REVIEW – Better Than Most Adaptations 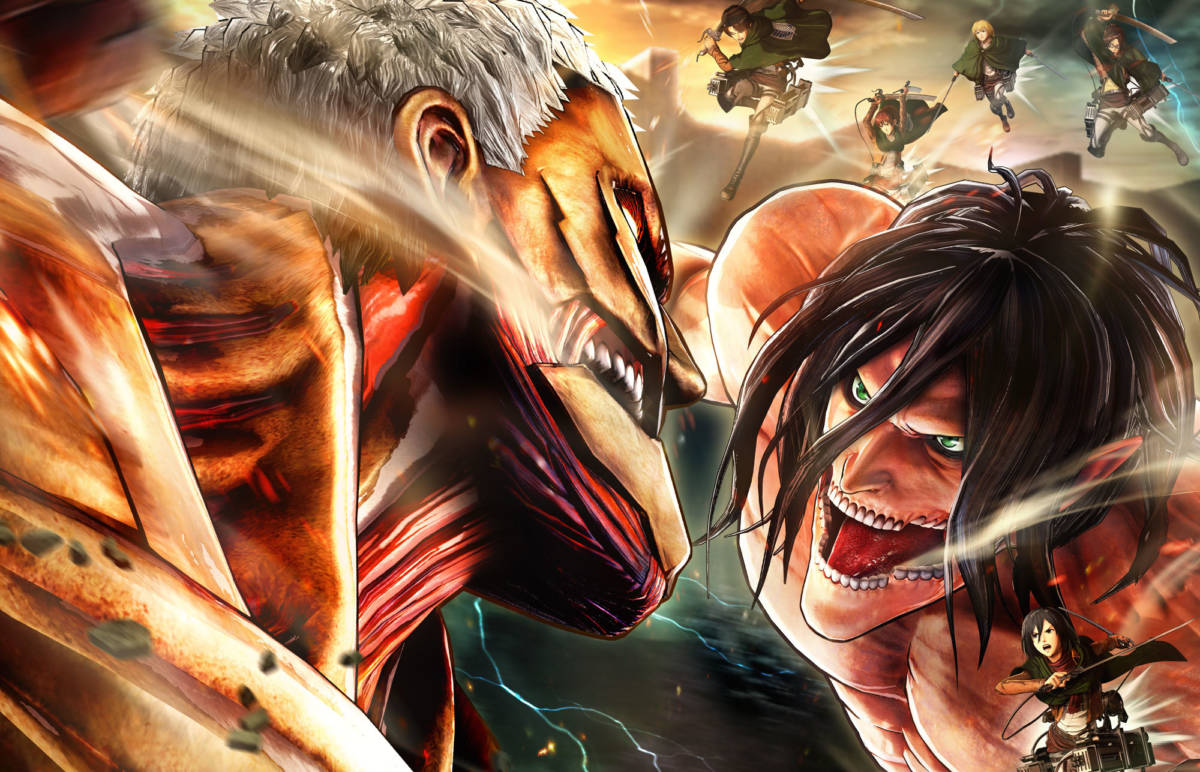 To some degree, I have to tip my hat to any developer that has the daunting task of adapting a movie, book or TV show into a video game. Compared to an original IP, you have to make sure the game is accessible to all audiences whilst ensuring it remains faithful to the source material, because the last thing anyone wants in the 21st century are angry fan bases knocking on their door. Above all else, though, it needs to be fun and have enough depth to keep gamers wanting to come back and carry on playing.

Ask any anime fan what series could be adapted well and I am willing to bet a bag of Reese’s Pieces that Attack on Titan would be somewhere on that list and rightly so. It’s a fun, action-packed anime with interesting characters and decent storytelling to go with it. However, we’ve all been burnt by good anime having terrible video game adaptations before. Fortunately, this isn’t one of those times. The clue is in the title, after all.

For example, Seven Deadly Sins, while okay to play, was little more than threadbare fan service. It made the mistake of playing it safe and throwing in nearly every genre imaginable, and the game became a chore to play as a result. Admittedly, I was pretty much expecting the same with Attack on Titan 2, but what I got instead was a game that, despite a few nagging problems, offered a surprising amount of depth, and gave me the impression that this was lovingly made by fans for fans.

For the uninitiated, the plot involves humankind being at constant war by gigantic horror-show attractions known as Titans. The war follows the viewpoint of Eren Yeager and his friends, who enroll to become cadets fighting the Titan horde. Unbeknownst to Eren is that he possesses the Titan gene himself, which could be used to the army’s advantage, and things only get crazier from there. That’s an oversimplification of the plot and there are many twists and turns, but if you would like to know more, the series is on Netflix. Pop it on and you can join me for the review in a bit. I’m not going anywhere. 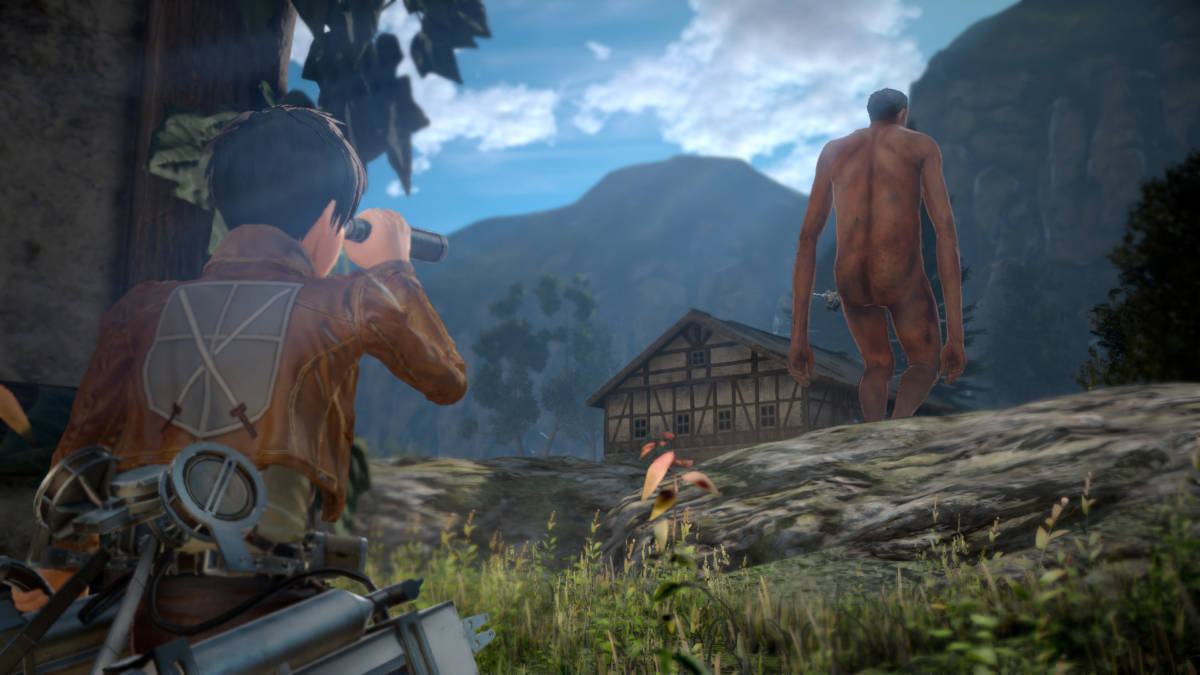 Firstly, let’s get this bit of praise out of the way: it follows the plot remarkably well and does include several plot points from the manga that are expected for season 2, when that gets the English dub. Allowing you to create your own character and seeing the main events unfold through the eyes of your own character brings in a certain amount of weight to the game, giving your character dialogue choices to help further friendships with the main cast. In doing so, you unlock perks that’ll aid you in the heat of battle. While nothing big changes in these dialogue options in the way they would in Telltale or Bioware games, they’re still a nice perk to have. You don’t even need to be a huge fan of the either the manga or anime mediums to understand what is going on as Omega Force do a terrific job of making the game relatively easy to understand.

The presentation of the game, whilst murky with its browns and grays is still decent, with plenty of attention to detail in the cel-shaded graphics. Most cut scenes are done in first person view just to help drive home the fact that you are in this war and you are fighting these Titans alongside the rest of the characters. It’s the little things that help this game stand on its own two feet and help the player immerse themselves into the world further.

As far as gameplay is concerned, levels are pretty much the same on all fronts. Titans are attacking the area, you need to use your horses or ODM’s – Omni-directional mobility gear to zipline you from place to place, which has you acting out like Spiderman on a very dangerous crack binge.To kill a Titan, you must strike at its nape which is located on the back of its neck, but hacking off limbs give bonuses so it’s worth toying with your opponent before finishing it off.

At the end of each level, a big boss Titan appears, but the only real difference is that they have weak spots which you must attack instead of the nape. They also have a health and stamina bar but sometimes you can’t quite tell if the game is being harsh but fair or if you’re generally being useless. Some of the bosses can be taken down with one attack, yet others see you wasting precious time attacking the same area over and over again for only a small amount of health to go down.

If you just focus on the main mission objectives, you can finish a level within mere minutes, but as previously stated, the game is peppered with other elements to help freshen things a little bit and prolong the experience. There are side missions, which generally entail trying to prevent your fellow cadets from being eaten by the Titans. Helping them out means they can help you in battle, attack other Titans and unleashing special moves. Pro tip: always make Levi a part of your team if you can.

As the game progresses, your fellow cadets can build bases that can help you replenish supplies, mine for extra crafting materials and attack Titans. Realistically though, you’ll only need the mining bases and the replenish bases if there’s not enough around the battlefield, though those instances are rare. Further along in the game you will then get the option to capture Titans for Hange’s research.

There are specific Titan’s for each class that you need to fill out and provides other ventures to earn more experience points, money and combat bonuses on the battlefield, leveling up in this game becomes very easy, provided you know what you are doing. While a nice touch for completionists this mechanic could potentially give other players a bit of a headache when you realise that most of these Titans look the same, especially when you’re preoccupied on other avenues. 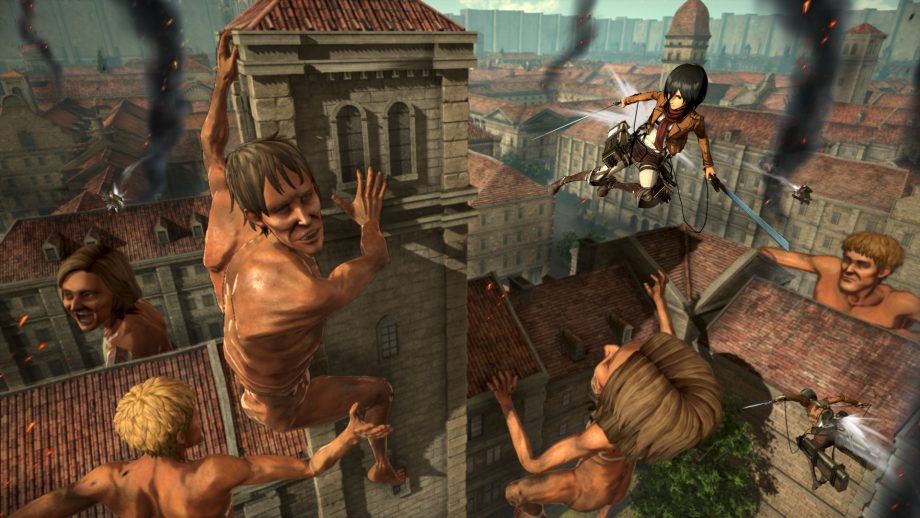 This is where things on AoT2 get tricky. Though it’s nice that Omega Force are doing everything they can to keep you playing and the sentiment is there, it’s hard to escape the feeling that there’s too much to do and keep track of. Between zipping from rooftop to treetop, carrying out your own objectives, helping your comrades, building your bases, defending your bases, capturing Titans and making sure they’re not the same ones you already captured while not getting eaten by a Titan yourself, all while making sure you have enough gas and blades to keep you going, battles can become overwhelming very quickly. Throw in a few glitches that left some Titans flopping around the floor like dying fish, along with texture pop ins and some chuggy frame rates when there are more than 4 Titans in the area, and things start to become tedious.

In between story battles you are taken to the barracks, which gives you a chance to build on your friendships. Depending on your answers and how far you develop the relationship, you can unlock some much needed perks and unlockables. Crafting weapons and ODM kit’s or upgrading your current set out is a nice touch, but renders the item shop completely useless as you can pick up most of what you need in battle or if you choose to take part in scout missions. What are scout missions I hear you plead? They’re pretty much the same as the main missions, but with a survival edge to them as you are usually asked to do 3 to 4 missions at one time to unlock more of the map for – you guessed it – more scout missions. 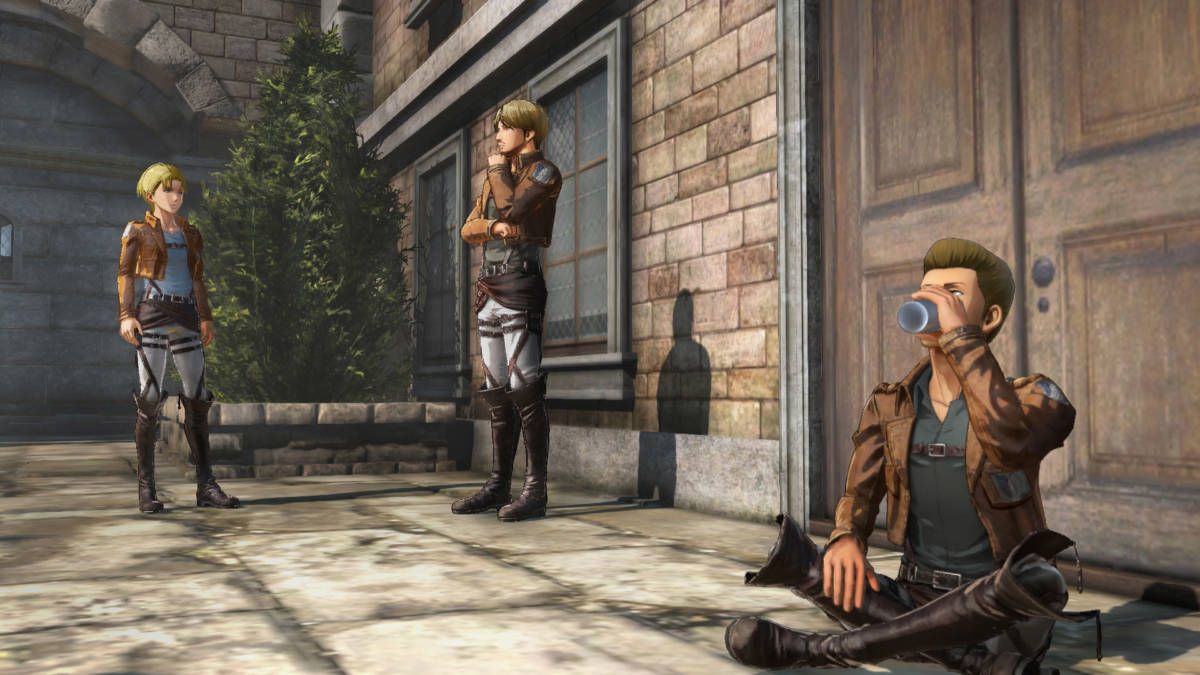 The main benefit to scout missions are to help your character level up to equip more perks and you can find more rare resources for your equipment, but only true completionists will probably relish the challenge. Still, it’s great that AoT2 includes such elements as upgrading your kit, as it gives you good incentive to get back out there and make your blades sharper or cover longer distances with your ODM. More casual gamers might get put off by this system, but if you stick with it you can reap some great rewards.

I can’t entirely fault the team at Omega Force for what they did, you can see the hard work they pulled off to make AoT2 as immersive and deep as possible without taking too many liberties. My overall experience of AoT2 was mostly fun, positive and kept me coming back for more like an all you can buffet. I’m a sucker for hack and slash games despite their repetitive nature and any fan of the genre will appreciate the work put in.

I suppose the best way I can sum up AoT2 is that it doesn’t break any new ground, but it doesn’t need to; the core mechanics are simple and easy to pick up and play. Everyone involved can give themselves a hearty pat on the back for doing what they could to draw in old fans, causal fans and fans who may not know what the anime or manga is about. If you’re looking for a decent hack and slash game to play to get that awful taste of Dynasty Warriors 9 out of your mouth, give this one a whirl and forgive the minor bugs and glitches.

Verdict
Fun, gory and surprisingly deep for an adaptation, Attack on Titan 2 may not break any new ground, but will win over the hearts and minds of old and new fans alike. Microtransactions: None
7