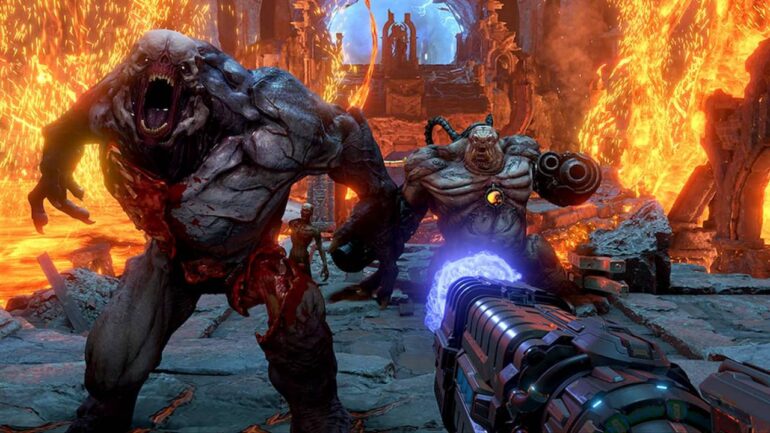 It’s no secret that DOOM Eternal, id Software and Bethesda’s premier movement shooter and consistent hype generator, is a firm favourite of the senior staff here at Cultured Vultures. Launching in 2020, the demonic FPS stole our hearts with its challenging yet rewarding gameplay, god-tier soundtrack and brilliant level design. Those DLC campaigns were a bit of alright too, even if those Spirit enemies can get in the goddamn bin.

After id and Bethesda confirmed that The Ancient Gods would be the last proper DLC for the game, it was kind of assumed that development would slow down to a crawl, but that doesn’t appear to be the case. DOOM Eternal’s executive Marty Stratton issued a statement on Twitter to talk about the future of the game, confirming that the previously announced Invasion Mode is being cancelled in favour of a single player Horde mode instead.

It’s sad that this change has come about due to the fact that the team is struggling to deal with the effects of the global pandemic. In an ideal world, id Software would have been able to implement both an Invasion Mode for players who want it, alongside a Horde mode for other players to test their mettle against the strength of Hell’s armies.

That being said, if I had to pick one, I’m way more excited about the idea of a Horde mode than Invasion. While it would’ve been an optional extra for players who wanted it, it’s hard to escape the feeling that adding that human element would tip the difficulty too far against the Doom Slayer. The enemies in DOOM Eternal are tough, sure, but their AI allows them to be predictable and easier to overcome. Humans aren’t predictable, so it would make the game tougher as a result. It would’ve been great for the people who want it, like those who enjoy the same feature in games like Dark Souls, but I know I’d be turning it off.

Besides, id Software have already created a crucible for those players who want to see how the Doom Slayer would fare against player controlled demons in the form of Battlemode. The development team has committed to supporting Battlemode with a refresh coming soon, and at least another new map. More details about those will be confirmed at QuakeCon in August, but the point is that there’s something there for those competitive minded players.

More than anything though, I’m in love with the idea of how id Software would implement a Horde mode in DOOM Eternal. There’s so many ways they could go about it, whether it’s through changing the theme on a week by week basis, adding roguelike mechanics so that you unlock new abilities and perks per wave, or adding specific challenges like only using certain weapons. Then, we’ll all inevitably panic when the final wave is 27 Marauders, all buffed by Spirits. I might eat my words if that happens.

There’s no doubt that the lack of Invasion mode will be disappointing to a lot of people, which is completely understandable. Again, it would have been great to have seen both Invasion and Horde mode as part of the same game. However, if the ongoing pandemic has been as difficult on the team as they’ve said it has been, it feels like this roadmap of sorts is the best solution: honouring the community’s desire for a new single-player mode while remaining committed to the existing competitive mode. I can’t wait to see more.

READ MORE: Where Does DOOM Go Next After DOOM Eternal?