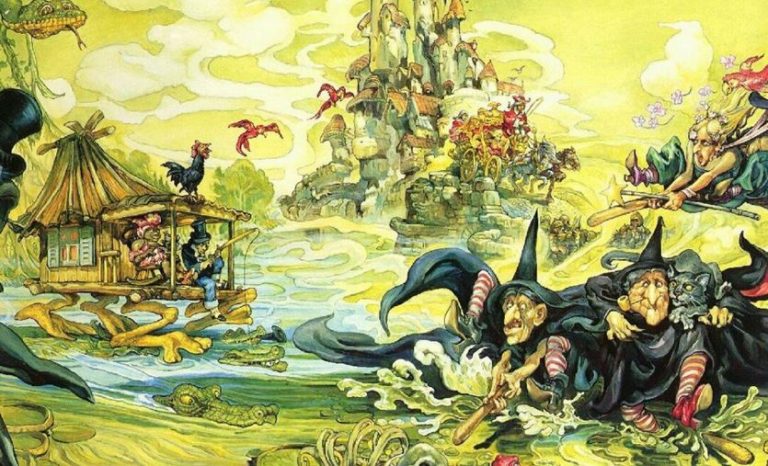 ’ is the second of the books featuring Granny Weatherwax, Nanny Ogg and Magrat Garlick, and the characters here are much more familiar than the ones we saw under development in ‘Wyrd Sisters

’. The Granny of ‘Wyrd Sisters’ didn’t seem quite comfortable in her skin, and Nanny wasn’t much more than an excellently written stereotype with not much substance at all.

This time around, Granny knows who she is and Nanny reveals hidden depths that were not even hinted at the first time around. As for Magrat, she is a character who suffers for being placed alongside such strong companions, because here, once again, she has no chance of standing out, although perhaps she is beginning to show signs of the strong characterisation of her own that later on makes her a queen.

Twelve books in, there are definite themes that are developing, and definite groups of characters who are involved in the stories that develop these themes. The witches, for example, have now had two stories based around the power of storytelling, belief and fate; firstly in the theatre and now here, with fairy tales. Death covers philosophy; the wizards, science and the Watch, issues. They don’t all fit precisely into these categories, of course, and later on I suspect it will deviate even more, but as a vague way of cataloguing, I think it holds up at this early stage.

With this in mind, it is very important to note that the storytelling aspect of the witch books is in no way more whimsical than the others. In fact, I would argue that the witches – especially in this book – actually grapple with ideas that are far more complex and much darker than anything the wizards or the Watch have ever come up against. They may battle end of the world scenarios on an almost daily basis but the witches are involved in bloody and desperate struggles for people’s souls and, in Granny’s case, her own soul too.

I was struck in particular with the mirror effect in this novel. There is the literal mirror, of course, where Granny is haunted by Lilith, but there is also a definite blurring of the line between good and bad. When Granny and Nanny find the wolf who has been convinced he is human, a creature that is essentially being tortured from the inside out, they are horrified by the very idea that someone could do such a thing. That horror is seemingly forgotten a little while later, when they turn Nanny’s cat, Greebo, into a human. Greebo has a much easier time of it than the wolf, seeming to enjoy the opportunity to have a fight or two and still be given a saucer of milk at the end of the day. This is beside the point, of course; in this case, the end justifies the means, even if the means are deplorable. Granny and Nanny make this decision with no hesitation and no regrets. If the ending is the one you have chosen, they seem to say, the means are just something you have to do. For a novel concerned with the traditional black and white narratives of fairy tales, it is a very human statement being made.

To Granny herself then, who ends this novel as the character I remember from later books. Granny is fated to the good witch, no matter how she might rail against it. When she finally arrives at her showdown with her sister, we learn the true meaning of her rage; she is not angry that Lilith chose the life of the ‘bad one’. She is angry because Lilith got there first, and stories dictate that one sister must be good whilst the other is bad. ‘I had to be the good one’, she says, and all her fury is wrapped up in that single comment. Granny could be bad, so easily; in fact, you suspect that being so might come more easily to her than being good. She has to keep such a grasp on her self-control because if she lets go for even a second, Lilith is what she will become and that, to her, is now the worst possible fate when once it might have seemed so attractive.

This power of mind over matter, the internal struggle, feels far more real, and relevant, than a plague of shopping trolleys or a dragon on the loose ever could. If you like your fantasy to have a human face, you could do much worse than going back to Sir Terry’s witches.