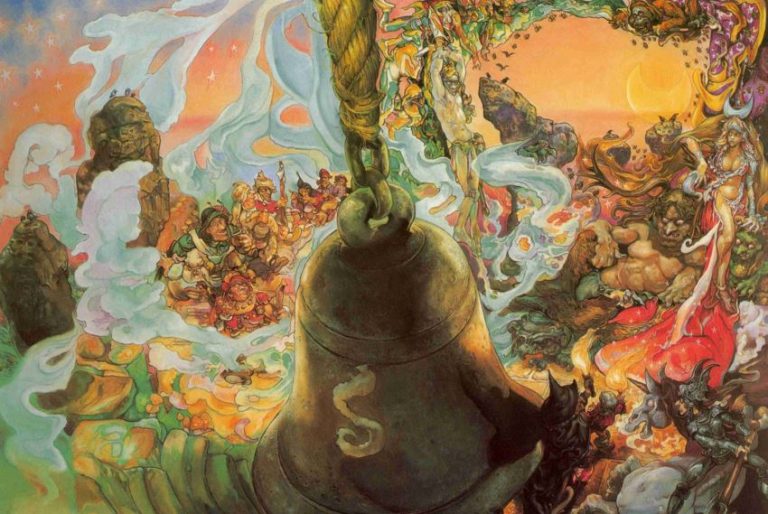 It struck me reading this novel, the third in the series which follows the witches, that whilst Sam Vimes and the Watch may be my favourite group of characters, the witches just have storylines that totally blow most of the other novels out of the water.

I spoke in my ‘Witches Abroad’ article about Granny Weatherwax and how she is a character constantly at war with herself, and about the themes of the witch novels; storytelling and belief, and how these ideas that seem quite whimsical are actually anything but fanciful. ‘Lords and Ladies’ is another such story; when the barriers between worlds become weakened, a terrible force that was once banished from the Disc threatens to return. The elves are coming and they are far from the fairy tale creatures that the name might conjure up.

This book opens with an author’s note, explaining the sequence of the witch novels. This is the first time that Pratchett has felt the need to comment like this and, as far as I remember, he does not make any such comment later on. With this, the fourteenth novel, I suppose it is fair to suggest that we are still in the early days of the series and with readers still working on becoming familiar with Discworld, Pratchett may have seen a real need to make it clear that ‘Wyrd Sisters’, ‘Witches Abroad’ and ‘Lords and Ladies’ do form probably the most clear recurring storyline so far. You don’t need to think much about it to realise that Granny is still reeling from her confrontation with Lily in ‘Witches Abroad’, and to begin to make other links.

When the elves are described as ‘all cruelty and cool unkindness; a mind full of intelligence, that’d use other living things and hurt them because it was fun’, the words could as equally apply to Lily as they do to the elves. Just as Granny, Nanny and Magrat have formed as characters, the shape of the enemies that the witches take on have begun to form into coherent patterns too. Vimes or Rincewind would not be able to do battle with a force like the elves. The poor darlings wouldn’t even know where to begin. The elf invasion of Magrat’s castle is truly terrifying, something I struggled to read by myself late at night, and it is only Granny that you can imagine saving you from that.

There is a very different feel to the witch novels, one that clearly sets them apart from the others, at least in my mind. I don’t know if it is the idea of stories that appeals to me so much, or the very internalised and personal battles that appeal to me so much, but there is just something. They are earthy, pastoral feeling novels about earthy, pastoral people, but so far from simple in spite of that fact. That might be what I like best about them; the complexity of the ideas that are hiding behind simple people and simple stories. I am not surprised that Pratchett chose the witches to be the launchpad for his books for younger readers; it is possible, as he demonstrates so well later on with Tiffany Aching, to use these simple and earthy people to introduce younger people to the intricate themes of Discworld. He does not, in my opinion, ever really simplify his themes at all; he just makes use of the best characters he has for the job. That is, of course, the witches.

This book also contains what I think is the most evocative passage so far, six pages of atmospheric writing that I would assign as reading for anyone who asked me to demonstrate Pratchett’s skill as an author. It is a simple scene, once again; Jason Ogg, son of Nanny, is called upon to shoe Death’s horse, Binky.

He does this blindfolded, as he has done every time he has been asked to do this, and the quality of the passage blew me away. I could quote the whole thing, but I will limit myself to a few lines near the beginning: ‘On nights like this, normal people would pull the covers over their head, sensing that there were times when the world belonged to something else. In the morning it would be human again; there would be fallen branches, a few tiles off the roof, but human. For now…better to snuggle down…But there was one man awake.’ If anyone ever asks you to prove Pratchett’s worth, tell them to read about Jason shoeing that horse. They won’t be able to say a word against it.

Favourite Quote: “Nanny Ogg looked under her bed in case there was a man there. Well, you never knew your luck.”