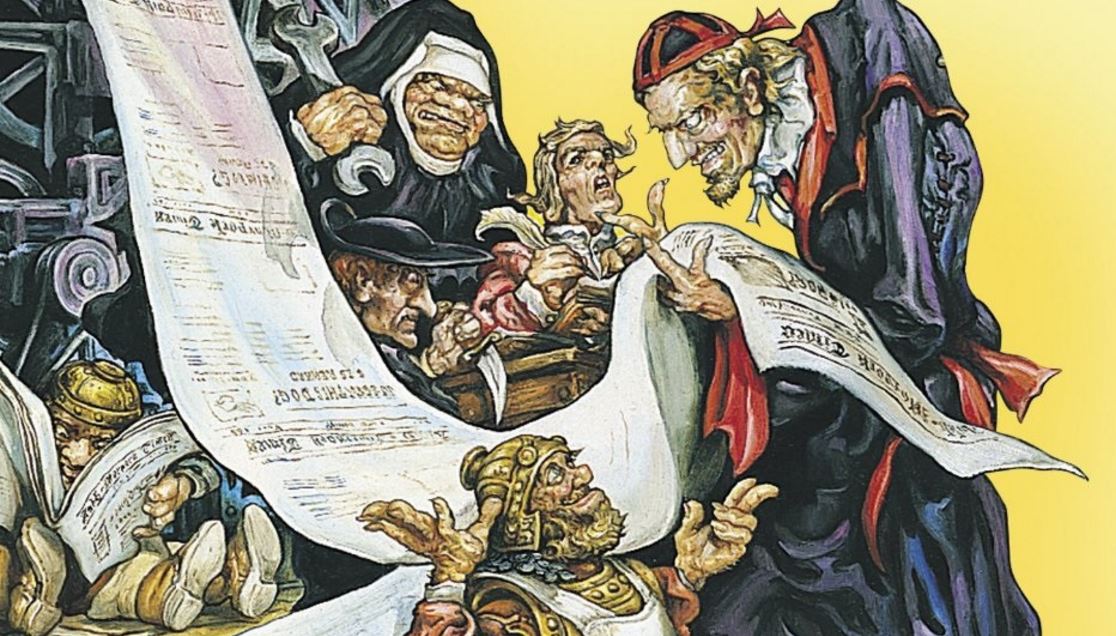 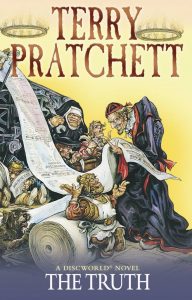 My much read and battered version of the ‘The Truth

’ tells me two things; firstly, the banner on the front cover proudly reminds me it is the twenty-fifth Discworld novel, the first published, appropriately enough, in the new millennium. Secondly, the state of the cracked spine tells me that whoever owned this book before me loved it a lot – my two readings couldn’t have possibly put it into this kind of a state.

In picking the book up and pushing on, it is easy to see why the previous owner read it until it was wrecked; ‘The Truth’ is one of the most dynamic, fast paced and excellently written novels in the series so far. I haven’t been so completely overwhelmed by the need to read one of these things since back in the heady days of ‘Guards! Guards!’ and ‘Witches Abroad’ (and oh boy, do they seem like a long time ago now!)

‘The Truth’ revolves around the efforts of small time reporter William de Worde, writer of a monthly newsletter with a limited circulation, who accidentally falls in with a group of dwarves who have perfected the printing press. Before long, not only does William have a newspaper to run and a newspaper rival to see off, he also finds himself in the middle of a plot to overthrow Lord Vetinari and the reluctant middle man for a ‘translator’ who claims he has got the full story from Vetinari’s dog, Wuffles.

It sounds complicated but as you may remember, my appetite for Sir Terry’s complicated storylines is very limited so I can assure you that this one is almost as simple as any he ever did. It helps that it is packed with characters we know and love, alongside the new; Vimes, the Watch and Lord Vetinari rub shoulders with William, his right hand dwarf Goodmountain, the irrepressible roving reporter Sacharissa and Otto, the vampire photographer who has sworn off blood and just wants to focus on his pictures. As with all Sir Terry’s novels, it helps immensely that all of the new characters are very likeable and relatable, too.

William is probably the cleverest Discworld character I have come across, aside from Leonard of Quirm and the Patrician himself. There are few who match wits with Lord Vetinari and Sam Vimes and come out not only unscathed but almost on top. William is a highly educated second son, determined to make his own way in the world that his father so despises, and he does that by watching, listening and always being ready to learn more. Some Discworld characters, by the very nature of the fantasy, are probably certifiably insane, but William, although he does have some quirks, is one of the most normal Sir Terry created.

He is easy to root for and you find yourself doing so very quickly. Other characters – Vimes and Granny Weatherwax, for example – struggle heroically against their ‘true natures’, the darkness they can feel tugging at their hearts. William fights his battle quietly and without fanfare; he could be the snob his father is, could hate the hodgepodge of Ankh-Morpork society so much that he leaves the city for good, a not so closeted racist who won’t even talk to a member of another species. William could be those things, but he is not, and his silent battle of wills with his own upbringing is something I think a lot of people could relate to.

One of my favourite things about this novel was a chance to see some of our best loved characters in a different light. Until now, we have only really seen Vetinari and Vimes through the prism of the Watch novels, which give us an idea of how their own men view them, but little by way of public image. They are public figures, of course, and the eyes of ordinary people tell us a lot about them.

Vimes is described as a ‘violent and vicious man’, and people dread his presence like they dread the plague. Even William, a keen observer of people, has a picture of Vimes as a man who punches first and thinks later. I found this incredibly interesting; we know, of course, that whilst Vimes is sometimes the violent and vicious man, it is only in order to protect people who cannot protect themselves. We know that Vimes’ officers adore him, against all apparent odds, something William views with confusion when he cannot understand why the Watch continues to call him ‘Mister Vimes’ even though he is now a noble man of status. Pratchett’s pastiche of this dichotomy between public and private image is an excellent addition to an already clever criticism and comment on the free press and freedom of speech.

It is even more keenly observed as later in the novel, William seems to be of the opinion that Vetinari is the more reasonable of the pair; he visits the press and seems to concede to William’s determination to continue publishing, only telling him to ensure that he does not ‘upset Commander Vimes’. For all his intelligence, William has failed to recognise Vetinari for what he is; a master chess player, who knows that information is more valuable than anything else. This respect the three men hold for one another comes late in the story, once William has proved himself, but I ended the story desperate for more; if Pratchett had chosen to write only political intrigues set in Ankh-Morpork for the rest of his series, I would have been more than happy.