Trash in name only. And the literal trash. 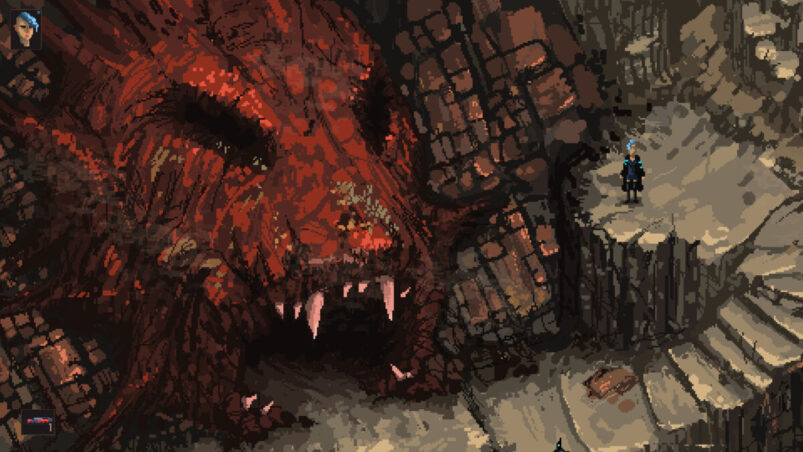 Steeped in its almost oppressive atmosphere of junk, puke, and literal sentient pieces of meat, Death Trash gets right to the point in telling you it’s not a happy time. Machines have taken over the planet, and a mysterious event referred to as “The Bleeding” has reduced the planet to a wasteland. The last remnants of humanity, known as the “Universal Society” (at least that’s what the robots call them), live in underground habitats away from the radiation and hideous abominations on the surface.

You start off as a blank slate character who wakes up while being kicked out of a habitat by some rather unhelpful robots for reasons unknown. You have the option to either go through a tour of the underground habitat as a tutorial to get acquainted with surface life, or you can opt to just make your way to the front door and fend for yourself. The grossest part is figuring out that you have the ability to vomit on demand and use it for bizarre purposes like “organic lubricant” to start a machine or other horrifically repulsive things. It’s unapologetically sickening, but definitely fits the mood when everything is an ugly mutant or a robot that wants to rip your head off.

The strange charm of going around from dark, oppressive apocalypse to goofy moments like encountering a man with very little care and clothing in the world or a giant flesh-beast that just wants a friend gives this RPG a certain charm to it. It’s aware of the literally trashy nature of its subject, but it still keeps reminding you it’s very much a dark tale.

Getting the hang of the systems in Death Trash is pretty straightforward compared to its inspirations like Fallout or Baldur’s Gate. Everything’s very plainly told to you and there seems to be little complexity, but you soon discover there’s tons of depth to the systems in place. Combat functions similarly to a stripped down isometric RPG like Diablo with real-time combat and simplistic controls to either hit something in melee, shoot it with a gun, or use an implant found on a dead body. There’s even the ability to tame wild creatures with the skill Animalism, like capturing a Fleshworm and then flinging it at an enemy where it starts attacking them on its own. Combat options are plentiful and fights against multiple bad guys early on are challenging, unless you use all of those options given to you. It’s easy to aggro wild creatures if you’re not careful, but the ability to activate an invisibility cloak when not in a fight makes it handy to either pickpocket someone or get the drop on them to finish an encounter much easier.

Using equipment is super-friendly too, with slots on your character sheet working in the old drag and drop ways where you can slot and un-slot upgrades on the fly so long as you’re not in combat. Usable items can be slotted into two different hotkeys for immediate use, so you don’t have to go into a menu and find a health potion or look at a utility bar to select the healing button. Not once did I feel like I got taken out of the action because I had to pause for a consumable. I loved every minute of it.

The blank slate approach to building a character gives tons of builds viability without feeling too much like a joke. Want to dump all your points into Strength and bludgeon someone to death with a single swing of your bat? You can do that. Want to diplomacy-check your way through some encounters? It’s possible, but still expect some denizens of the wastelands to put up a fight regardless. Finding implants to augment your character is a joy as well, presenting a lot of potential for both cheesy and useful gadgets that can help out in a fight or on a quest.

I didn’t get very far into the thick of the main story as I wanted to get a feel for the systems. Despite not progressing too deeply, I’m pleased to say this is one of the better RPGs I’ve experienced in a long time.

The mechanics and freeform presentation give Death Trash a nostalgic feel while also coming across like something wholly new. Sticking to its roots gives the entirety of the RPG side of things the ability to shine, while getting rid of the clunky overuse of menus and tables lets everything flow wonderfully. Gone are the days of tab-targeting enemies and hoping a random roll lands a hit, instead it’s just the best parts of an RPG boiled down to a meaty good time. Death Trash has rough edges such as some issues with crashes during fights or random instances of buggy functions, but it’s never enough to completely take away from the experience as a whole.

All in all, Death Trash is, so far, a solid RPG that fits in with games like Wasteland 3, Fallout 2, or Pillars of Eternity, though still feels like its own thing. The atmosphere alone is worth the purchase, even if it’s Early Access, but it could only get better (and even more gross) than it is now. If you’re looking for a unique game to scratch that RPG itch, look no further.

A key was provided by PR for the purposes of this preview. Death Trash is available in Early Access on PC via Steam, GOG, and itch.io.

READ NEXT: 20 Best Cyberpunk Games You Should Plug Into