And you just lost the game in the process. 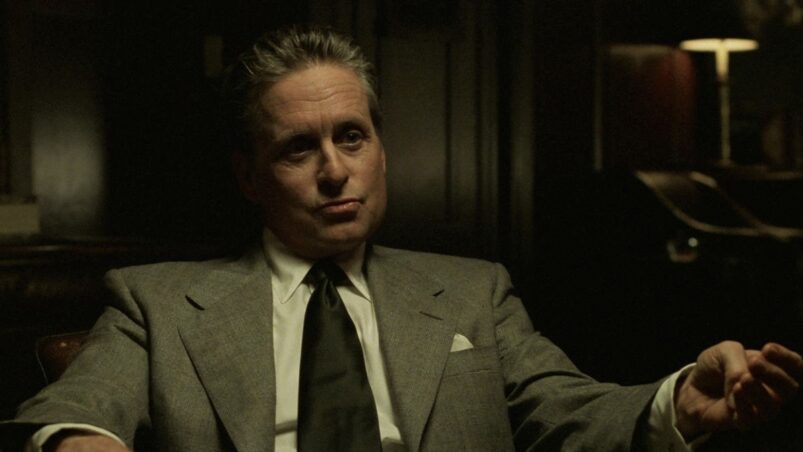 It’s a shame that The Game is sandwiched between Fincher’s Se7en and Fight Club, often getting lost in discussion because of the immense popularity of these other two movies. Like most of Fincher’s movies, The Game is stunningly well-made, with a haunting, heart-racing score from Howard Shore and Fincher building a visual contrast using still shots and slow-mos in the first half, to a more frenetic and chaotic vibe once it hits full tilt.

The Game follows wealthy elite businessman Nicholas Van Orten (played by Michael Douglas in a stellar casting decision), who spends his 48th birthday alone, retreating to his large home to eat a solitary meal. The only personal relationships he has in his life are with his brother Connie (Sean Penn) and his ex-wife Elizabeth (Anna Katarina). Both reach out to him on his birthday, but his demeanour is chilly and distant. He looks at his wastrel brother as a perpetual screw-up, and there’s palpable anger directed towards Elizabeth, who left him and got remarried, with a new baby on the way.

Connie gifts him a mysterious gift, which involves playing a game organised by a company called CRS (Consumer Recreation Services). Curious, Nicholas pays the company a visit, where he’s told to fill up psych questionnaires and take a physical exam. When he asks what the game entails, he’s told that each game is unique, tailored to the needs of the consumer. The game provides what is lacking, and that’s all the information he’s going to get. As someone who’s always had control of the reins, this is a unique premise for Nicholas, since he needs to relinquish control to play the game.

Nicholas has lived a life of excess, with his every need taken of and satiated, so naturally the secrecy involving the game infuriates yet excites him at the same time. So he agrees to play, and in doing so, throws his life into chaos. But it is necessary chaos, chaos he doesn’t even know he needs. All he ever focuses on is money, even firing his father’s friend Anson Baer (Armin Mueller-Stahl) from the book publishing company he started up because of the falling stock prices. Every ounce of his time is spent on amassing his fortune, resulting in a certain apathy for life and the people around him.

Fincher intersperses grainy footage of past memories with the present day (perhaps inspiring Succession’s opening sequence), allowing us to see the bigger picture of why Nicholas has become the way he is. His father committed suicide when he was 48 years old, the same age Nicholas is now, and there’s a certain fatalism within him as he wonders if his father’s fate would be his own.

Detractors of The Game criticise the far-fetched scenarios involved while Nicholas plays the titular game. After all, some elements of the game are incredibly dangerous, like plunging a moving taxi into water or Nicholas’ fall from the roof of a building. The fact that there are paramedics on standby after Nicholas falls onto a big air bag through breakaway glass shows that things could have gone horribly wrong. This stretches the sense of realism, since it feels a bit fantastical that the company could have planned and predicted his actions to such a specific degree. The company personnel do mention contingency plans, just in case he didn’t do things in the way they expected, but because we only see things from Nicholas’ perspective we never quite find out if he deviated from any of their plans.

Even Fincher himself said he maybe shouldn’t have directed The Game, something his wife told him not to do. Fincher commented: “In hindsight, my wife was right. We didn’t figure out the third act, and it was my fault, because I thought if you could keep your foot on the throttle it would be liberating and funny.”

I can see why, since the third act does send a mixed message of how we should view the rich. Even though going through all these tumultuous moments does help Nicholas let go of his apathy, his attempts to right his wrongs don’t go the way we expect. While Elizabeth accepts his apology, Anson is actually grateful to Nicholas for terminating his contract, since now he gets to spend more time with his family. This confuses things, since we’re expected to look at Nicholas as a sort of Scrooge character, but with Anson thanking him, it detracts from the earlier parts of the movie, where his behaviour is criticised.

Also, the way he turns to violence and intimidation the moment he perceives all his money has been taken from him strips him of his so-called airs of refinement. Yet, at the end, are we supposed to root for him, to be happy about his new lease on life? His decision to approach Christine and ask her out is a tad bizarre given that she was merely role-playing a character with him, and her acceptance is also weird since he was holding a gun to her head about an hour ago. But maybe that’s the whole point. The stakes and consequences are different for the rich. He can reveal those sides of himself and still be desirable; he is inconvenienced while playing the game, but this is merely temporary. At the end, he gets to stroll back into his life and have things be status quo.

Maybe the gap between the haves and have-nots is just unbridgeable — the game is rigged from the start, as much as we don’t want it to be.