Darkest Dungeon 2: How to Defeat the Dreaming General

Dreaming of a full release? 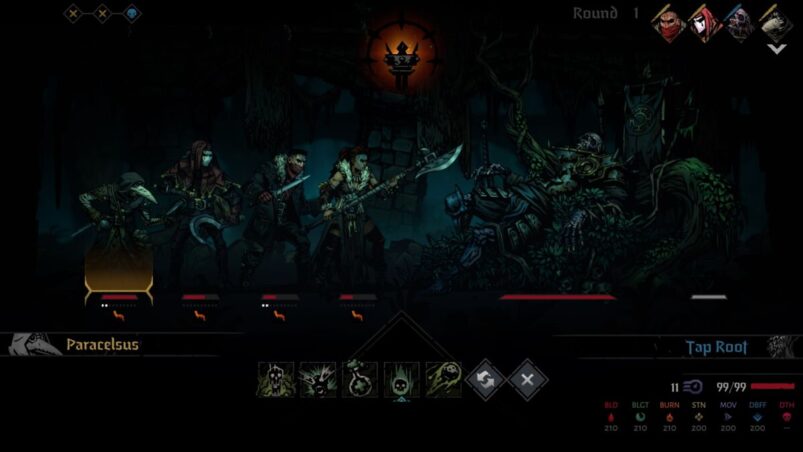 Chapter 1 of Darkest Dungeon 2 includes four bosses that are tied to specific travel locations. Players can find the Dreaming General in the forested Tangle travel location in the lair encounter. The General is the final enemy players will face as they delve into his lair, defending a hoard of treasure.

Here’s everything you need to know about the Dreaming General boss in Darkest Dungeon 2.

The Dreaming General boss fight has two challenges to contend with: the powerful attacks of the General and the malignant tree growth looking to strangle the life out of the party. The boss itself will usually attack last in a round, but they can either attack with medium damage and stress causing a single target attack or a powerful high damage physical attack on two targets.

However, it’s the tree root that will cause the most trouble to the party, as every turn the root will activate by spawning root tokens on two characters, which can be seen at the top of the screen above each hero. After two or three uninterrupted activations, the vines will lock and strangle a character causing damage over time and preventing them from using their own abilities and items.

The trick to defeating the Dreaming General is to ensure that the party is able to consistently hit the tree root spawning the growth tokens and reliably place stacking DoT effects on the General’s body itself, due to their own massive health pool. By hitting the tree root two or three times per turn, it will force some of the encroaching roots to recede and buy the party more time to deal damage.

Hero characters that are especially useful in this fight are the Plague Doctor, Occultist, Runaway, Grave Robber, and the Jester. Most of these characters can either hit the General and the tree root simultaneously on their turn, place a DoT on the General, heal hit points and stress or some combination of all these abilities. Combat items like the Healing Salve, Laudanum, and Ichor Bomb will all be useful in this engagement.

The Dreaming General is one of those dual threat enemies that can be challenging for unprepared adventuring parties. As long as you can keep the choking hold of the evil forest off your team, the General will succumb to the heroes’ superior skill.

READ NEXT: Darkest Dungeon 2 Is Off To A Promising Start