Darkest Dungeon 2: How to Defeat the Brain of Darkness 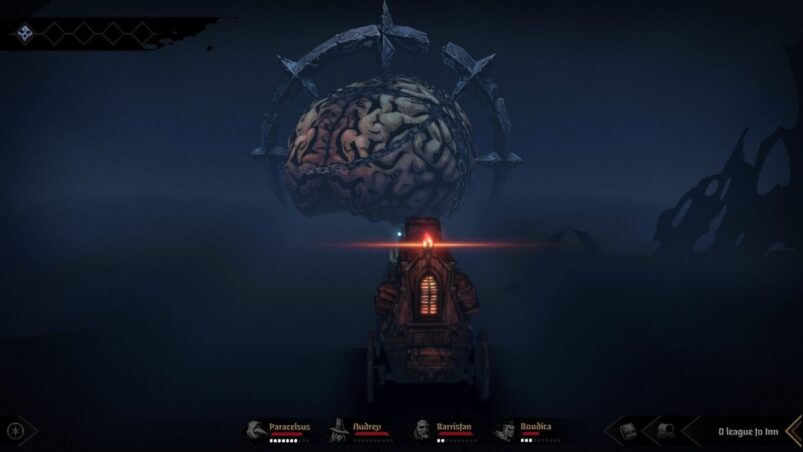 In classic adventure game fashion, Darkest Dungeon 2’s Chapter 1 finale has the player hero team facing off against one last boss before proceeding to the next stage. With the central theme of the game centering on breaking through stages of grief by desperately holding onto hope, the Brain of Darkness chapter boss represents this theme perfectly.

Here’s everything you need to know about the Brain of Darkness in Darkest Dungeon 2.

The Brain of Darkness presents itself to the player as a giant human brain, shackled by a number of locks, chains, and restraints, all metaphors for the paralyzing effect of grief. In this engagement, players will need to break each of the four locks: Bolt of Lamentation, Shackle of Despair, Padlock of Wasting, and Latch of Regret.

Each of these locks has a basic attack ability and a special ability negating effect, which prevents the activation of specific types of attacks or spells, such as melee or ranged attacks or healing or stress reducing abilities. At the beginning of every turn one of the locks will cast this negating ability that cannot be countered in any way besides destroying the lock responsible for activating this effect.

A successful approach to defeating the Brain of Darkness involves focusing damage on one lock at a time, especially whichever one shuts down the party’s most common type of ability.

In preparation for this fight, it may be wise to equip each character with a variety of skills so that no matter which ability lock is in effect, each hero can at least do something, preferably some kind of damage.

Once all the locks are destroyed, the player wins and Chapter 1 is then completed.

Just like the fight against the Librarian, flexibility is the name of the game when engaging the Brain of Darkness. Too much of an emphasis on one element of a character’s capabilities will leave them open to being shackled with paralysis and useless in combat, just like the brain the party is trying to free.

READ NEXT: Darkest Dungeon 2: How to Defeat the Harvest Child