Darkest Dungeon 2: How to Defeat the Harvest Child 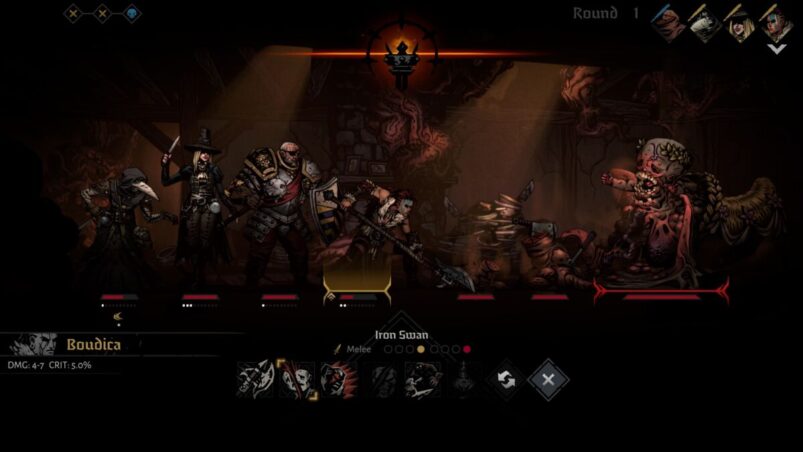 Players will find that the Foetor travel environment in Darkest Dungeon 2 is the most corrupted and twisted area, where mutated, messed up, and ever-hungry creatures desolate the once vibrant farmlands. The pinnacle of these horrors is the Harvest Child, the final fight in the Foetor lair encounter. Where the Librarian was simple, this monstrosity is anything but.

Here’s everything you need to know about the Harvest Child in Darkest Dungeon 2.

The Harvest Child is a large opponent that spawns in by taking the third and fourth rear positions, while the front ranks are filled by pestilent blobs of meat. The Child will cast a single target light attack ability that moves them forward one space. Once they reach the front rank, the boss will cast a high damage attack that hits the front two ranks of the hero party, after which the boss will move back a space.

While the front rank attack of the Harvest Child is plenty dangerous, it’s actually the pestilent meat that will cause the most amount of issues. The bigger pile of meat will cast a front-rank alluring aroma ability, which has the chance of placing a hunger effect on the affected heroes. The smaller of the two meat stacks will cast a similar aroma effect on the rear third and fourth positions of the party.

Heroes who succumb to this hunger will move one space to the front and must then attack corrupted meat if they reach the first position. Though this special attack does heal the character in question, it also reduces the overall hit points of the hero by a set percentage, which does stack, setting them up for a devastating attack from the Child.

Most of the heavy lifting to defeat the Harvest Child lies on the back two ranks as they are less affected by the hunger effect. The front two ranks will likely be busy with feasting on the debilitating pestilent meat, as well as receiving powerful hits from the Harvest Child’s maw. These frontliners will benefit not only from the large hit point pools, but more important high deathblow resistances.

To help with deathblow resistance, making sure that the flame level is as high as possible will give heroes a flat increase in their resilience, while also reducing the damage potential of the Child. Back rank characters that are most suited for this type of fight are the Grave Robber, Highwayman, Jester, the Runaway, or any hero that can move back with an ability and/or place DoT stack on the Child.

For combat items, Holy Water can help with dealing with the hunger effect, while the burning cocktail and any item that causes bleeding can help incapacitate the Harvest Child.

Unlike some of the other boss engagements where characters can escape relatively unscathed, there’s a high probability when fighting the Harvest Child that several heroes will be pushed to the brink and the party may suffer losses. This makes the Foetor one of the locations that can be left for later in the party’s travels, giving you time to equip useful trinkets and level up key hero skills. All in all, be ready for a tough fight.