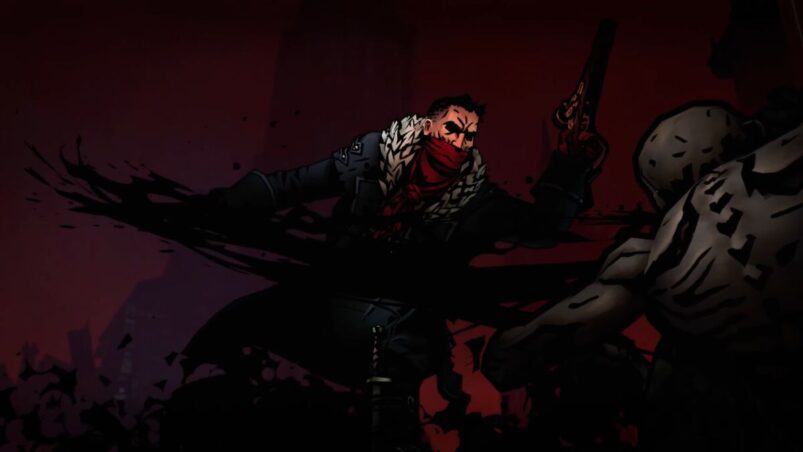 While Darkest Dungeon 2 maintains the spirit and Lovecraftian influence of the original, it’s quite a different ball game with its own strategic and tactica; nuances. The major changes can be found in exploration, character relationships, and enemy behavior. Let this Darkest Dungeon 2 strategy guide be a light that shines a path out of the darkness and despair of unspeakable horrors.

The primary goal of Darkest Dungeon 2 is to reach a towering mountain visible on the horizon that holds the key to the world’s survival. The player’s party will embark on this journey on a sturdy stagecoach that carries a torch that acts as a literal embodiment of hope. While maneuvering the stagecoach centers around choosing specific paths to reach desired destinations or encounters, there’s still value in controlling the stagecoach as you make your way forward.

On any given path, players will notice patches of terrain that the stagecoach can run over. These blocks of terrain are akin to curios of the original game and can yield small amounts of useful items. The stagecoach may not be the most agile vehicle, if players maneuver carefully and patiently then they can maximize the benefits they gain from exploration.

The journey to the mysterious mountain is broken up into stages defined by various theaters and types of terrain like the forested Tangle, the urban Sprawl, or corrupted Foeter. Each stage starts after players select the theater they wish to move through, after which they will get a partial scouting report of some of the encounters they may face on the map.

Since Darkest Dungeon 2 is all about making the best out of a horrendous situation, any way to find additional information will make the journey all the easier. One of the most useful locations to visit early on in a travel stage is the watchtower. The watchtower will reveal all remaining hidden encounters players have not yet passed, making it far easier to choose the best path.

The watchtower isn’t the only valuable location to visit in Darkest Dungeon 2. All characters start with five basic skills unlocked and the only way to unlock new ones to gain fresh tactical options and loadout choice is to visit the Shrine of Reflection.

Shrines of Reflection will give a brief rundown of the chosen character’s backstory, as well as giving a point of mastery – a resource that’s necessary in upgrading already available character abilities. In effect, the Shrine has a two-for-one benefit: a greater understanding of the character and increased tactical flexibility, the latter of which is vital to success in combat.

Inventory management is a far more prominent feature in Darkest Dungeon 2 as the stagecoach has only a limited amount of space to hold equipment. This actively encourages players to equip trinkets and use combat and inn items liberally.

Combat items are quite useful in that they count as a free action if used before activating a character ability, essentially giving character two actions per turn. Inn items are similar to the original’s camping items where they’re used to heal, recuperate, and prepare for the journey ahead. Players will find a wide assortment of items on their journey and there is little reason to hold back.

Keep Only the Best Items

Staying on the topic of inventory management, it’s almost guaranteed that players will have to reckon with excess encumbrance and must dump items. Most item types have several tiers, meaning that once you find an item, let’s say healing, that has a better effect than one of its brethren, there’s no reason to hold onto the less effective item. This also goes for trinkets, once you get a trinket that is directly better than one that you may have, if no other character has space to take the redundant one, feel free to drop the weaker one.

Wounds from weapons may heal, but damage to the mind is permanent and detrimental to healthy relationships. Stress makes a prominent return in Darkest Dungeon 2, retaining its dangerous effects in combat if players don’t manage it, while also negatively affecting intercharacter relationships. Higher levels of stress will in turn increase the chance of further negative events while on the road or in combat. Make sure to keep stress between zero and three.

Ounce of Prevention is a Life Saver

Currently, not only is the Plague Doctor one of the best characters for applying blight damage-over-time (DoT) effects, but they also have the best stress management ability in the game. The ability is called Ounce of Prevention and is the first new Plague Doctor ability unlocked at the Shrine of Reflection.

One of the most important new systems introduced in Darkest Dungeon 2 are character relationships. Each character holds an opinion of their comrades and this opinion can be negative or positive. Opinion is directly related to levels of stress so lower stress levels will yield better relationships over time (see stress and relationship guide).

Positive relationships are exceedingly beneficial to the survival and success of the party in combat in particular. Characters with an established relationship have the chance of acting out of turn with a free action that may reduce stress, heal hit points, or even act as a secondary attack. Strong bonds can also help characters reduce some stress while travelling.

While most positive relationships are generally beneficial, there is one relationship that is deceptively inconvenient – Inseparable. This relationship will definitely cause occasional stress reduction events in combat; however, Inseparable is also secretly a jealous relationship where a character may get upset about their partner activating some ability on somebody else except them.

Such a random occurrence can be critically lethal if it activates at the wrong time. It may be wise to find a way to force the Inseparable relationships to break specifically to try to roll for another positive relationship. Alternatively, if all characters have this type of relationship with the character in question, then jealousy is less likely to trigger.

There’s a slew of new enemy types for players to contend with in the twisted and corrupted lands of this despairing world. There are a number of enemy types that are designed to increase damage through combos or buffs that will lay on additional effects, like DoTs. It is wise to remove these enemies off the board as quickly as possible as their damage output can get out of hand.

The Fanatic Whipper, Flayer, and Pit Fighter found in the Sprawl may cause particular headaches with their ignition abilities and fire damage.

Just to cause more trouble for players, a number of enemy types have gained deathblow resistance, similarly to the player’s hero characters. This means that when they reach zero hit points, they’ll have a percentage chance of resisting death, as indicated on the enemy stat sheet in combat. This can catch some players off-guard and it’s advised to survey each enemy type carefully, as these tougher enemies may need a different approach compared to the smaller basic enemy types.

Apply a DoT on Resilient Enemies

One way of dealing with enemies with big health pools and deathblow resistance is to use an attack with a DoT effect, such as the Plague Doctor’s Noxious Blast ability or the Hellion’s If it Bleeds attack. Landing a lethal blow on a tough enemy with such an attack will have a chance of placing a DoT effect that will activate on the enemy’s turn. This will essentially act as a free attack on an enemy during their turn and will block their turn if they fail their deathblow resistance check.