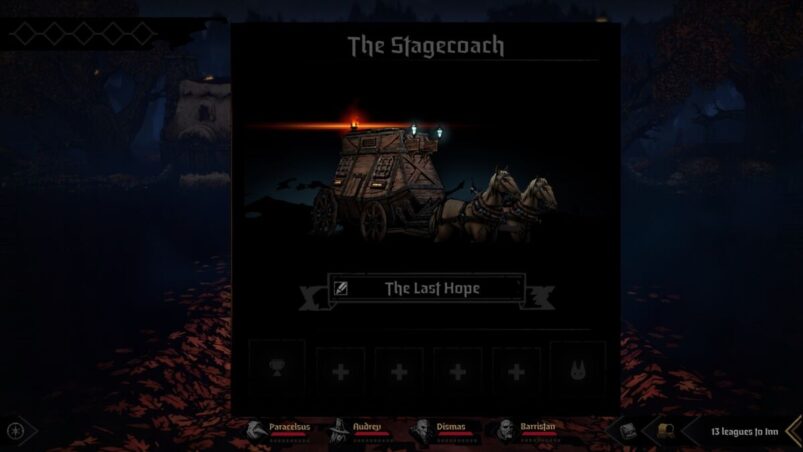 In Darkest Dungeon 2, instead of getting your party’s hands dirty by endlessly digging through twisted eldritch muck players will need to trudge through corrupted lands to reach the towering mountain on the horizon. Trading in the Hamlet hub of the first game, the humble stagecoach now becomes the party’s house-on-wheels.

Here are the main features of the stagecoach in Darkest Dungeon 2:

And here’s everything you need to know about the stagecoach in Darkest Dungeon 2.

The most prominent feature of the stagecoach is the lone torch holding a magical flame that’s literally the narrative embodiment of hope in Darkest Dungeon 2. Having the flame go out will all but guarantee despairing defeat for humanity.

From a practical standpoint, depending on whether the flame burns hot or wanes from a lack of fuel, it will impose combat effects on the party and enemy raiders and ambushers. The higher the level of flame on the stagecoach results in more positive effects for the party in combat, whereas a lower level will mean attacking enemies will gain advantages in battle, making the player’s life a living hell.

Aside from carrying the literal embodiment of hope, the stagecoach also acts as the player’s inventory. As the party picks up loot from encounters and combat engagements, all items will slot into the stagecoach’s limited space. Unlike the Hamlet of the first game, the stagecoach’s storage capacity is incredibly limited and it’s vital and encouraged to actively use or discard items on a regular basis.

The player will use the stagecoach to move through stages of the game, as they make their way to the mountain. While on the road, you will have the option of maneuvering the vehicle using the A and D keys for changing direction and W to get the stagecoach moving. The S key will stop it, but currently there’s no reverse function, so be mindful of driving the stagecoach.

The main elements to pay attention to while on the road are small blocks of terrain that can yield small rewards of loot, barricades, which indicate an enemy ambusher, encounters, events that can lead to a variety of activities, and finally forks in the road where players will need to choose the path that best suits their needs. Regardless of the chosen path, all stages are bookended by an Inn where the party can rest, restock, and prepare for the next phase of the journey.

The Inn will act as a safe haven for the party, but also will act as the workshop for improving the stagecoach itself. Players will inevitably pick up upgrade items of various kinds for their home-on-wheels, which the Wainwright can fasten to the stagecoach. All Inns have access to a Wainwright.

The stagecoach itself has four basic upgrade slots for items that can increase inventory capacity or item stacking limits, and two special slots: one for a relic and one for a pet. There’s no cost to slotting upgrades onto the stagecoach, so there’s plenty of room to experiment and modify it based on the party’s needs between stages.

The stagecoach itself doesn’t participate in combat, but acts as the party’s essential cramped shelter and cornerstone to prevailing in Darkest Dungeon 2’s oppressive and corrupted world. Find the right synergy of items, upgrades, and travel routes and you might just prevail.

Darkest Dungeon 2 is available now on PC via EGS.